Microwave pyrolysis for the production of carbon has the advantages of being cheap, produces high yield of carbon and is absolutely a green synthetic method [1]. In recent times, the use of microwave pyrolysis have been extended to the preparation of carbon dots. Carbon nanodots (C-dots) falls under the class of carbon nanoparticles with size below 10 nm[2]. C-dots are carbon materials which processes high water solubility and strong fluorescence depending on their size, edge, shape, surface ligands, and defects. Since C-dots preparation can be achieved from difference carbonaceous sources and by varying a range of parameters during their synthesis, the properties of the final product may vary depending on these factors. C-dots have sp2 characteristics and possess several functional groups on their surfaces that makes them highly hydrophilic and easily functionalized with various organic, polymeric, inorganic, or biological spices[3]. Several synthesis methods that have been explored includes electrochemical synthesis, combustion/thermal/hydrothermal/acidic oxidation, supported synthesis, microwave/ultrasonic, arc discharge, laser ablation/passivation, and plasma treatment[4]. C-dots processes excellent such as water dispersibility, chemical stability and photostability, ease of modification, excitation-dependent multicolor emission, low toxicity, and good cell permeability, great efforts have been paid to their potential applications in biosensing, bioimaging, drug delivery, and other biological related aspects.

The carbon dots (C-dots) with green luminescence was synthesized from microwave assisted pyrolysis of pine bark waste our carbon source at 800, 1000 1200 W for 1 Hr. The dots produced were characterized using FTIR, TGA, XRD, UV-Vis and Raman spectroscopy. The dots were applied for heavy metal sensing.

The functional groups present on the C-dots (Fig.1) includes -OH stretching band mode at 3413 cm-1, C-H stretching at 2934 and 2845 cm-1, stretching peaks of C=O, C=C at 1731, 1604 and 1437 cm-1. The XRD pattern (Fig 2a &b) of produced C-dots depicts sharp peak at 20.9o and 26.8o, which is highly crystalline cores and possess amorphous nature of C-dots. This peculiar peak is ascribed to 002 of the graphitic carbon, which in line with inter-planar spacing of 3.77 Å with higher spacing than bulk graphite at 3.34 Å. The thermogravimetric and differential thermal analysis display (Fig 3) that the C-dots possess thermal stability more than 100 oC and mass losses occurs afterwards. The thermal analysis depicts 3 endothermic peaks at 331, 542 and 735 oC, which are ascribed to oxygenated groups such as carboxyl, hydroxyl, carbonyl and phenols. The optical properties of the synthesize C-dots were explored using UV-vis absorption and photoluminescence (PL) spectroscopy. The UV-vis spectra display (Fig 4)intense absorption peak in the range of 260 to 290 nm, which is ascribed to π-π* transition of the aromatic sp2 domain and also presence of multiple polyaromatic chromophores. A shoulder peak at 330 nm which is ascribed to n-π* transitions of C=O and structural defects of the C-dots. PL spectrum of the C-dots (Fig 5a)exhibits an intense maximum emission peak at 432 nm upon excitation at 330 nm, which also shows characteristic yellowish green color under sunlight and intense blue coloration UV lamp (365 nm). The PL properties of as prepared C-dots was varied at (Fig5b) different excitation wavelength from 300 to 405 nm. There was red-shifting in emission peak as the excitation peak was increased from 300 to 405 nm and also simultaneously decrease in fluorescent intensity, which is ascribed to quantum effect and surface defects. This behavior of the prepared C-dots is dependent on excitation-fluorescence, which is accordance with other report [13]. The quantum yield of synthesized C-dots was measured to be 17% at maximum excitation at 330 nm

Fig.6 shows the Raman spectrum of the PB-GQDs, which has been usually used to confirm the quality of the prepared PB-GQDs. There is two major Raman peaks at 1370 cm-1 (D band), 1580 cm-1 (G band). The peak of G band corresponds to the Sp2 bonded carbon atoms in a two-dimensional (2D) hexagonal lattice and the peak of G band is associated with the vibrations of carbon atoms with dangling bonds in the termination plane of tangled graphite or glassy carbon. The D/G ratio band ratio is ID/IG: 0.68 is confirm the formation of graphene like structure from synthesized pine bark.

The detection of Cu2+ was performed at room temperature in phosphate buffer (PBS) solution pH 4.3. 1.0 mL of PB-CQDs solution was added into 0.5 mL of PBS buffer, followed by the addition of 1.0 mL different concentrations of Cu2+. The fluorescence emission spectra were recorded after reaction for 5 min at room temperature (~28 oC).

Moreover sensitivity and selectivity is additional significant parameter to assess the performance of the sensing system. Consequently, we examined the fluorescence intensity changes in the presence of representative metal ions such as including Cu2+, Hg2+, Ca2+, Al3+, Ba2+, Mn2+, Ni2+, Pb2+, Co2+, Zn2+, Fe3+, Cs2+and Mg2+, of each at a concentration of 15.0 µg mL-1 were reacted with a PB-CQDs solution. Fig. 7 A displays the relative change in PL intensity of PB-CQDs in the presence of various metal ions. Fe2+, Mn2+ and Hg2+ ions cause the slight PL changes (defined as the relative change of PL intensity in 60–80% as compared to blank) which can be attributed to the nonspecific interactions between the carboxylic and/or amine groups and the metal ions. Among these metal ions, Cu2+ displays the strongest PL quenching effect on PB-CQDs, assigning to the special coordination between the Cu2+ ions and the phenolic hydroxyl and/or amine groups of PB-CQDs which has been widely used for the detection of Cu2+ ions or colored reactions in traditional organic  chemistry. Such a specific fluorescence quenching effect may originate from the strong interactions between Cu2+ ions and the surface groups of PB-CQDs which transfer the photoelectrons from PB-CQDs to Cu2+ ions. These results clearly demonstrate that the PB-CQDs-based Cu2+ sensor is highly selective to Cu2+ over the other metal ions. Fig.8. Fluorescence responses of CCDs to the addition of different metal ions under acetate buffer (pH 4.3). The concentration of each metal ion is 15 µg mL-1. F0 and F correspond to the fluorescence intensities of PB-CQDs at emission wavelength of 440 nm excited at 320 nm in the absence and presence of metal ions, respectively. 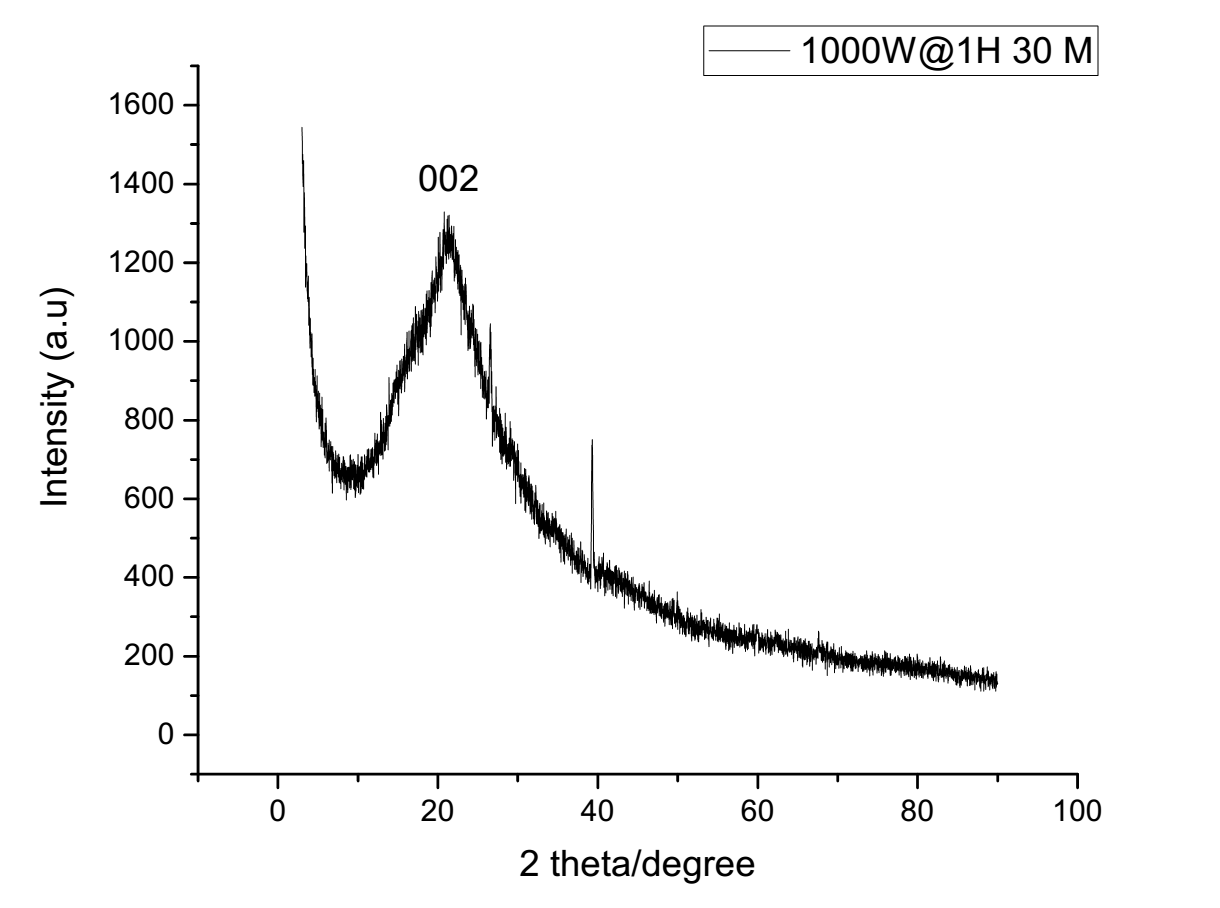 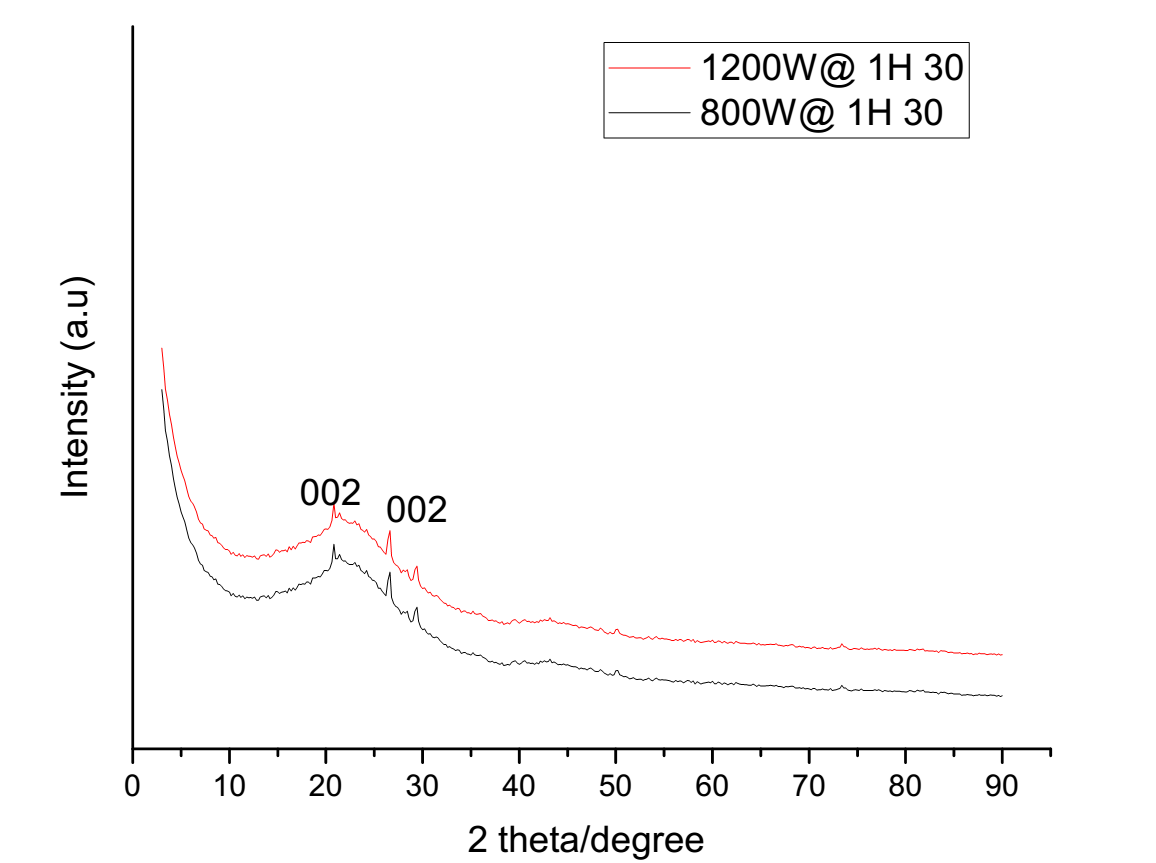 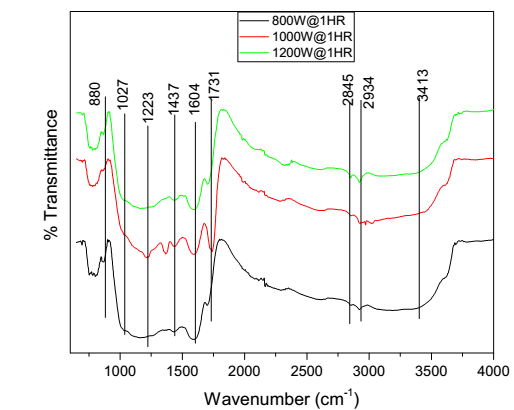 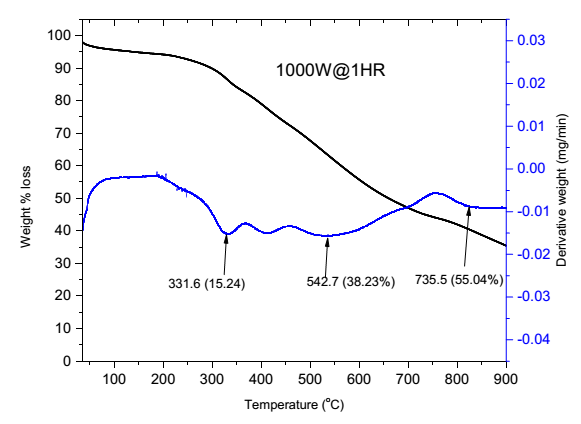 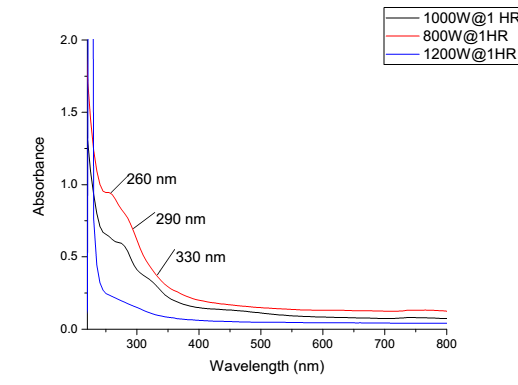 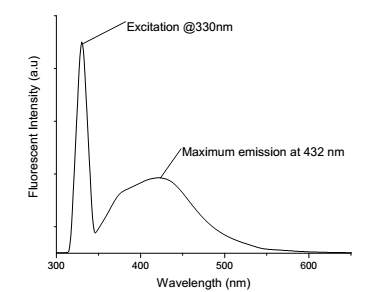 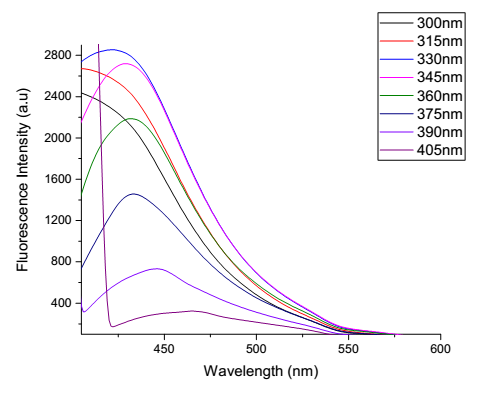 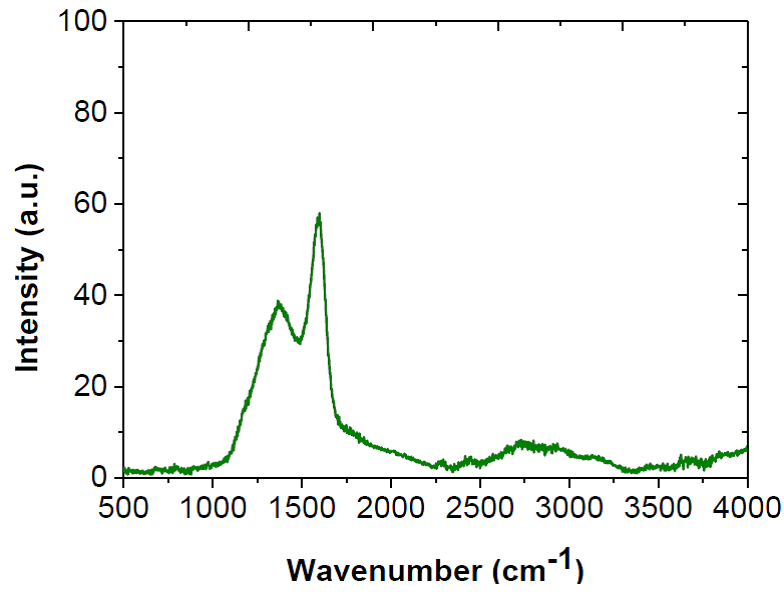 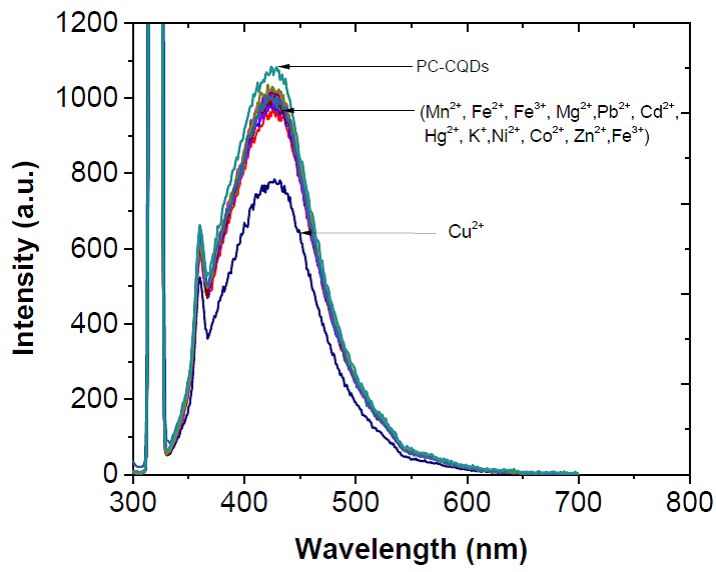 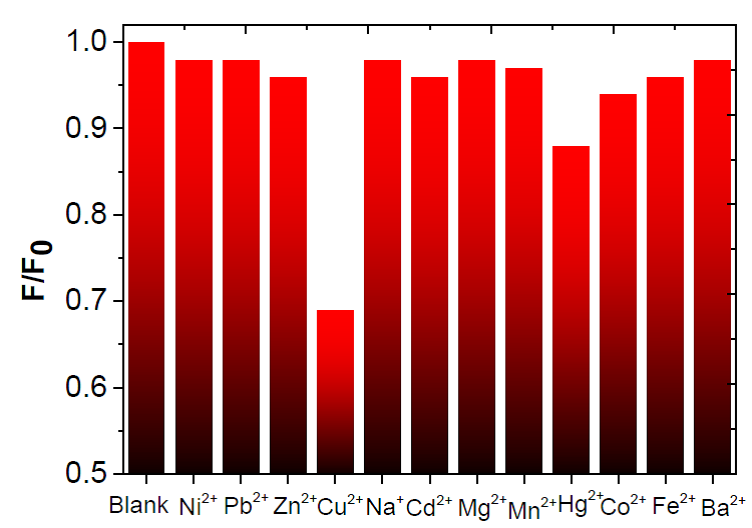 Fig.7. Fluorescence responses of CCDs to the addition of different metal ions under acetate buffer (pH 4.3). 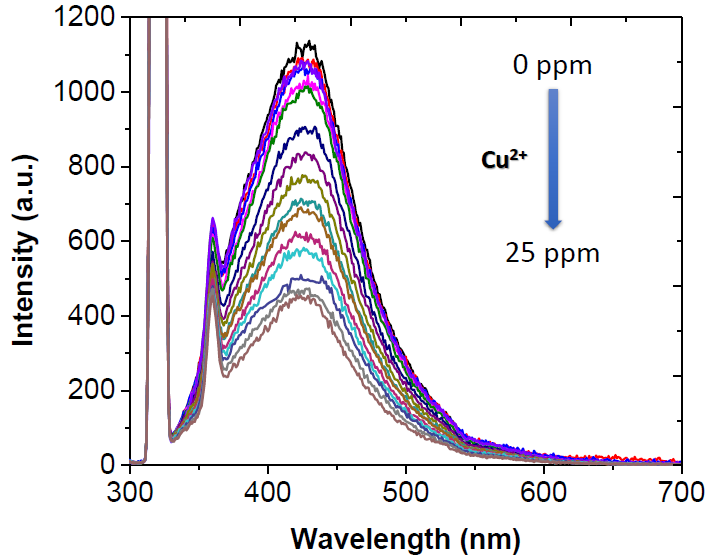 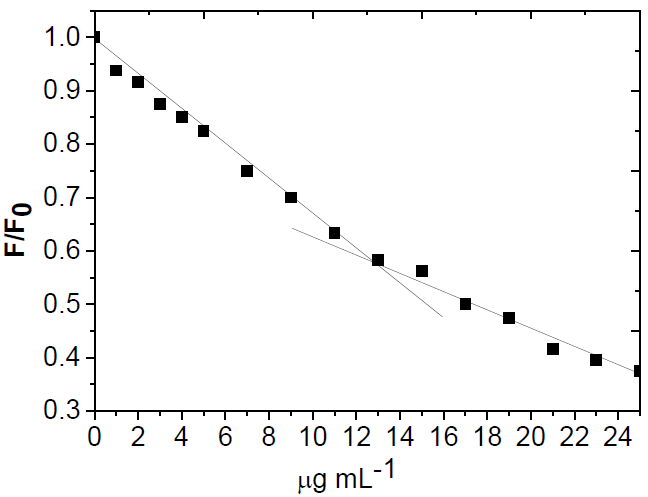