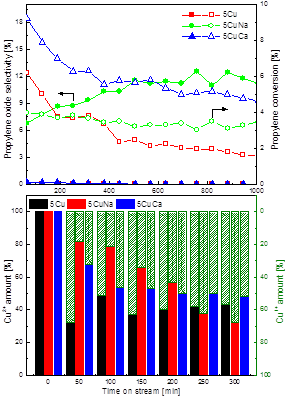 After CuOx deposition, a decrease of about 25 % in specific surface area and pore volume is observed, when compared to pure KIT-6 silica support. The shift in pore size distribution towards lower values indicates that the CuOx phase lies inside the pores of the silica support. Subsequent modification of the CuOx catalysts with sodium induced only slight changes in surface area, pore diameter and pore volume. X-ray diffraction patterns at low 2θ angles of pure KIT-6 silica support, 5Cu, 10Cu and 10CuNa catalysts indicates a well-ordered mesoporous structure of the KIT-6 support, which remains unaltered during subsequent copper loading and sodium modifications.

The BF-TEM micrographs show a well-ordered mesoporous structure in both the sodium modified and unmodified sample, which confirm the results of the N2 physisorption and XRD analyses. Additional morphological properties were probed with the

UV/VIS DR analysis. They revealed characteristic charge transfer bands between mononuclear Cu2+ and oxygen. A broad but less intense peak corresponding to the d-d transition of Cu2+ ions in an octahedral environment, which can be attributed to bulk CuO, was also observed. In all samples a shoulder characteristic of [Cu–O–Cu]n-type (oligomeric species) was present. Ex-situ and operando UV/VIS DR analyses of the unmodified samples showed a notable absorption red-shift along with the increase of band intensity related to bulk CuO, after the second calcination protocol (to simulate the alkali and earth alkali modification of the samples) and during catalytic conditions. Alkali as well as earth alkali modification of the CuOx/SiO2 catalysts noticeably stunted the sintering effect seen in the unmodified samples. Switching to a purely reductive atmosphere results in a progressive increase of light absorption in the whole range of wavelengths for both the modified and the unmodified catalysts. Returning to an oxidative atmosphere causes re-oxidation of the catalyst where the structural changes induced by the reduction are, to a greater extent, reversible in the 5CuNa catalyst, when compared to the unmodified catalyst.

Acid sites are known to negatively affect selectivity for PO, as these strongly electrophilic surface sites can react with the bridging oxygen in PO, resulting in its further oxidation, or surface blocking and deactivation via strong adsorption.[4] The results of pyridine DRIFTS measurements indicate no Brønsted acid sites on the analyzed samples and a negligible change in the Lewis acidity after copper loading. On the other hand, sodium modification decreases the amount of Lewis acid sites for 44 and 29 % in the 5CuNa and 10CuNa catalysts, respectively. The decrease in Lewis acid site abundance is in line with the sodium content, i.e. 0.8 and 0.5 wt. % in 5CuNa and 10CuNa catalysts, respectively.

Abundance and binding strength of hydroxyl groups to the catalyst surface was analyzed using H2O-TPD-MS technique. It can be seen that Cu addition to KIT-6 silica causes an increase in the density of water and hydroxyls. Their number is decreased after Na and K modification. The largest abundance and strength of hydroxyl binding to the catalyst surface (based on the position of the high-temperature desorption peak) is observed after modification with calcium.

Operando XANES analysis revealed that a substantial fraction of Cu2+ is transformed to Cu+ during the propylene oxidation reaction. The kinetics of oxygen abstraction and replenishment are substantially different, indicative of modified chemistry of the nucleophilic oxygen species, present in 5CuNa catalyst in contrast to others (5Cu and 5CuCa). Using LCF (linear combination fit) analysis of the 5Cu, 5CuNa and 5CuCa catalysts (at 350 °C in O2/He atmosphere) shows all copper is present as Cu2+ and the majority (~90 %) is subnanometer Cu2+ clusters. Only ~10 % is present as nanocrystalline CuO.

Over the non-promoted catalysts, the catalytic reaction products are CO2, CO, water, acrolein and trace amounts of other oxygenates (acetone, propanal, propanol, …), however, the latter present less than 5 % of the C containing products. Regardless of the copper content, strong deactivation is observed over all unmodified catalysts: they lost more than 60 % of initial activity during the 17 h of propylene oxidation reaction, which is likely related to sintering of oligomeric [Cu-O-Cu]n species. Modification of 5Cu catalysts with sodium and potassium greatly minimized catalyst deactivation: minimal deactivation is observed during 17 h TOS for the 5CuNa catalyst, whereas catalytic activity of 5CuK and 2.5CuNa stabilizes after 10 h following the initial decrease of about 25 %. After Na and K addition, a notable (~10 %) propylene oxide selectivity was also observed, which increased with prolonging TOS. With calcium modification of the 5Cu catalyst, a dramatic increase in the initial catalytic activity is observed (9 and 6.5 % propylene conversion for 5CuCa and 5Cu catalysts, respectively) with trace (below 0.5 %) PO selectivity. Acrolein and COx selectivities remain very similar to the unmodified 5Cu catalyst.

Based on the research done, we propose that Cu+ is not crucial for PO formation; instead the electropositive Na+ and K+ decrease the nucleophilic strength of oxygen in CuOx, making its attack on the allylic hydrogen of propylene less invasive. Alkali (K and Na) modification produces finely dispersed alkali metal cations, associated with the CuOx phase, resulting in a greatly stabilized morphology and catalytic activity. The effect of calcium on decreasing the nucleophilic character of O species in CuOx is negated by charge compensation by strongly adsorbed hydroxyl groups. As a result, Ca modification for PO selectivity is inefficient.