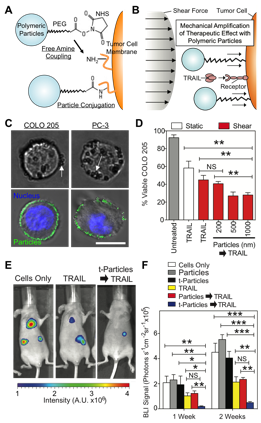 Introduction: Regulation of receptor-mediated phenomena at the nanoscale in a controlled manner remains a challenge for a broad range of fields, including cell biology, medicine, and bioengineering. Fluid forces play a crucial role in receptor-mediated signaling necessary for physiological function, while materials such as nanoparticles (NPs) have demonstrated potential for spatiotemporal control of cellular signaling. Here, we have developed polymeric mechanical amplifiers that tether to the cell surface and increase receptor-mediated apoptosis in the presence of physiological fluid flow.