Zeolite Y has shown to be an effective sorbent material for the adsorptive removal of sulfur from transportation fuels.1 In their natural state, Y zeolites are microporous and non-selective. To meet the mandated sulfur standards for gasoline and diesel, several functionalities need to be added to the zeolites to improve the sulfur uptake. Firstly, the introduction of mesoporosity enables the adsorption of refractory sulfur compounds, which could not be achieved by conventional hydrodesulfurization without excessive energy. The bigger pores improve mass transfer and minimize diffusion limitations. Furthermore, adsorption sites for sulfur can be increased through the addition of metals by ion-exchanging the zeolite with active metals such as Ce or Ce. As a result, the adsorption process becomes more selective to thiophenic molecules via the interaction of a π-complexation or a direct S-M σ bond.2,3 The incorporation of metal ions increases the selectivity for sulfur, especially in commercial fuels. The objective of this work is to fundamentally understand the adsorption mechanism of various sulfur compounds on the zeolite active sites. To achieve this goal, IR spectroscopy experiments were performed using model thiophenic compounds, and parent Y and metal-modified Y zeolites.

Bifunctional zeolites were first prepared by introducing mesoporosity via two top-down methods: (1) desilication (DS) and (2) surfactant-assistant technique.4,5 The mesoporous zeolite was subjected to an ion-exchange procedure to replace the protons with either Cu or Ce metals. The modified zeolites were characterized using various techniques. The pore size distribution and crystal structure were identified using N2 adsorption/desorption isotherm and x-ray diffraction (XRD), respectively. Surface acidity and metal distributions were determined using pyridine and CO adsorptions by diffuse reflectance infrared spectroscopy (DRIFT-FTIR), respectively. DRIFTS-FTIR experiments were also used to study diffusion limitations and adsorption mechanism of thiophenic compounds on various modified zeolites. The metal loadings on the zeolite were quantified using ICP. Isosteric heat of adsorption calculations were conducted via a batch method to study the strength of interaction between each sulfur component and the sorbent material.6 The adsorption pattern was assumed to follow the Langmuir isotherm.

Breakthrough experiments were conducted in a fixed-bed column to study the dynamic adsorption of model fuel (thiophene (TP), benzothiophene (BT) and dibenzothiophene (DBT) in octane). The desulfurized effluent was collected periodically until saturation had been reached and analyzed using a gas-chromatograph-sulfur chemiluminescence detector (GC-SCD). Results indicated that the best materials for the removal of TP and BT were the metal-exchanged zeolites (CeY and CuY). Larger pores, however, were required for the adsorption of sulfur compounds with a larger kinetic diameter, such as DBT. Metal-exchanged mesoporous Y (ie. CuSAY) has shown to be the most effective sorbent with an increase in DBT uptake by about 75 mg/L compared to the parent Y, as demonstrated in Figure 1(a). These results suggest that the adsorption of DBT is perturbed by diffusion limitations, which can be overcome by bifunctional zeolites. Figure 1(b) shows that in a mixture of model fuel containing all three thiophenic compounds, the CeSAY material proved to be the best sorbent, suggesting a preference to adsorb refractory sulfur compounds with a larger kinetic diameter. 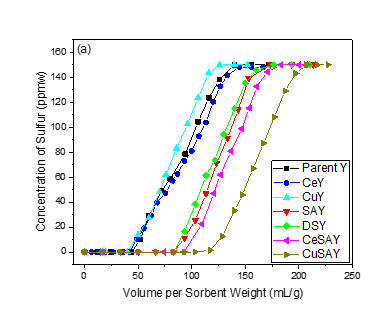 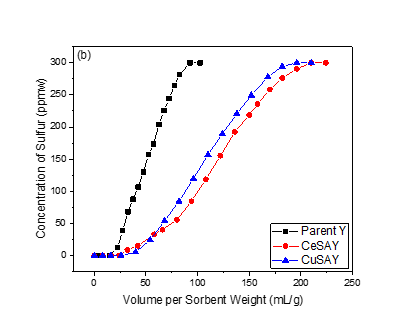 Figure 1: Breakthrough Curves of (a) DBT and (b) model fuel on various Y-derived zeolites.

In all cases, the tendency for zeolites to adsorb sulfur compounds increases in the order of TP < BT < DBT. The isosteric heat of adsorption calculations revealed that DHads was the highest for BT adsorbed on CuY. This is likely due to the strong π-stacking of the BT ring atop the Cu metal. The CuSAY, despite assisting in overcoming diffusion challenges, showed the lowest DHads. This shows that the isosteric heat of adsorption is only a descriptor of the interaction strength.

The adsorption mechanism of sulfur on Y zeolites can be revealed by FTIR studies. About 25 mg of zeolite was weighed into the DRIFT cell and activated in-situ with either H2 or N2 for 1 hour. Upon activation, benzothiophene vapor was introduced into the cell via a heated line until saturation was achieved. Temperature programmed desorption (TPD) studies were carried out to investigate the sites at which BT is adsorbed. Figure 2 shows the BT adsorption spectra on CuY and parent Y zeolites. The OH region on the left shows that a higher temperature is required to completely desorb the BT ring from CuY compared to parent Y. This is also apparent in the 2000-1000 cm-1 region where most of the C-C and C-H vibration modes have disappeared from the parent Y spectra by 360 °C, but the same peaks are still visible on CuY. As suggested by the breakthrough curves and heats of adsorption, Cu-exchanged zeolites can form π-complexations with sulfur, shifting the C=C band vibration of 1640 cm-1 to lower frequencies. As a result, more energy is needed to remove the strongly held BT molecule from CuY. 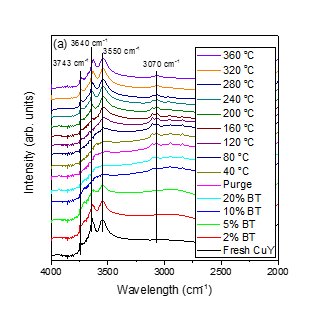 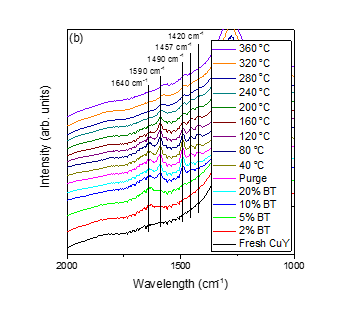 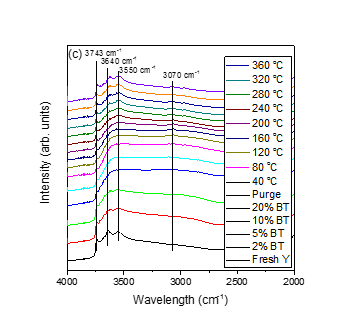 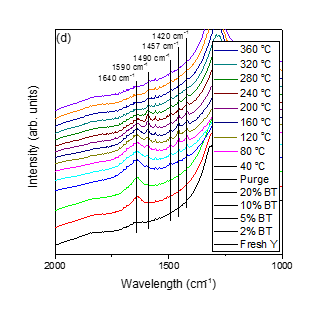 Breakthrough studies revealed that CuSAY has the highest capacity for refractory sulfur compounds such as DBT due to strong π-complexation interaction between the sorbate and the sorbent. In a model fuel containing various thiophenic compounds, CeSAY proved to be the best sorbent in selectively removing DBT via the direct σ-bond interaction. Both isosteric heat of adsorption calculations and FTIR studies suggested that higher energy is required to break the bonds between CuY and BT. Collectively, our findings suggests that determining  the optimum balance between the pore structure and metals in a bifunctional zeolite is essential for maximizing capacity and selectivity for sulfur compounds.