471466 Biocatalytic Polymer Material for Partial Oxidation of Methane to Methanol

An industrial process for the selective partial oxidation of methane under mild conditions would be highly valuable for controlling emissions to the environment and for utilizing vast new sources of natural gas. Methane monooxygenase enzymes perform the difficult activation of methane under nearly ambient conditions, suggesting a biochemical process for methane conversion could be more efficient, less capital intensive, and more easily downscaled compared to current industrial practice. However, the industrial use of enzymes for large-scale applications, especially those involving gas-to-liquid reactions, has been limited by the low enzyme loading and poor mass transfer characteristics of stirred-tank reactors. We have successfully embedded the enzyme particulate methane monooxygenase (pMMO) within a 3D printed hydrogel to create a mechanically robust and gas permeable material that overcomes mass transfer limitations to convert methane to methanol. We studied the kinetics, reactant dependence, and product inhibition of the partial oxidation of methane by pMMO, as these parameters are not well understood and are critical to optimization of our biocatalytic hydrogel material design. 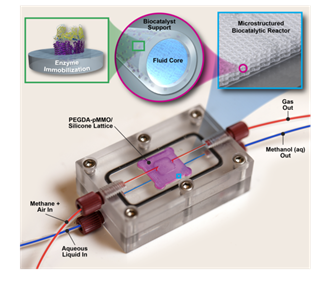 Methods: pMMO was immobilized in poly(ethylene glycol) (PEG) hydrogel during crosslinking by UV-initiated photopolymerization. The activity of pMMO was measured by a methanol assay at 45°C using NADH as the reducing agent; methane was injected into the reaction headspace and the methanol produced was quantified by GC-MS. Kinetic studies were conducted by stopped flow analysis with varying pMMO, NADH, dissolved oxygen, and dissolved methane concentrations.

Results and Discussion: Immobilization of pMMO within PEG resulted in a biocatalytic material with nearly 100% physiological enzyme activity. By increasing the surface area to volume ratio of the material using 3D printing, we were able to achieve high volumetric methanol productivity of 2 g/L/hour. Additionally, the hydrogel material can be cured within a poly(dimethyl siloxane) scaffold as part of a flow-through reactor, shown in Figure 1, which is capable of continuous methanol production. Finally, we have determined the dependence of methanol production rate on gas phase reagents, which will facilitate optimization of reactor design parameters such as enzyme loading, membrane thickness, gas-to-liquid volume fractions, surface area to volume ratio, and flow rates.

This work was performed under the auspices of the U.S. Department of Energy by Lawrence Livermore National Laboratory under Contract DE-AC52-07NA27344.

Extended Abstract: File Not Uploaded
See more of this Session: Breakthroughs in C1 to Chemicals and Processing Engineering
See more of this Group/Topical: Topical Conference: Innovations of Green Process Engineering for Sustainable Energy and Environment