The lymphatic system is an essential though sometimes overlooked part of the cardiovascular system. The best-known role of the lymphatic system is to drain interstitial tissues. In addition, both recent and historical evidence demonstrate a central role for lymphatic vessels in lipid absorption, immune surveillance, and in regulating salt-dependent blood pressure. Failure to establish adequate tissue drainage results in lymphedema, which is painful and debilitating, and is a common outcome of cancer treatment. At present there is no cure for lymphedema.

Lymphatic valves are necessary for unidirectional lymph flow and thus for the physiological function of the lymphatic circulatory system. The inability to treat valvular dysfunction constitutes a critical bottleneck in the treatment of lymphatic diseases including lymphedema. Unfortunately, adults have only a limited ability to generate new lymphatic valves. There is likewise little progress in developing lymphatic valves, or any other cardiovascular valve, in vitro.

In preliminary results, we have built a novel 2D in vitro assay that reproduces key aspects of the fluid flow environment near valves, such as flow through a constriction, and discovered that lymphatic endothelial cells seem to recapitulate the first steps in valve formation when exposed to this flow environment. We show that human lymphatic microvascular endothelial cells (hLMVECs) align perpendicular to the flow direction at the region of the maximum wall shear stress (WSS) (Fig. 1), i.e. at the maximum constriction site, and exhibit a highly nuclear localization of Prox1, a transcription factor required for valve formation (Fig. 2). Further experiments demonstrated that chemical inhibition of the G-Protein Coupled Receptor, Sphingosine 1-Phosphate Receptor 1 (S1PR1), which we have previously showed to be important in hLMVEC response to fluid flow, with antagonist 5 μM W146 blocks both the perpendicular alignment of hLMVECs with respect to flow (Fig. 1B) and the upregulation of Prox1 (Fig. 2B).

Ongoing work aims to build an in vitro 3D assay to guide lymphatic valve formation, and to further characterize the interaction of spatiotemporal flow-based stimuli with signaling pathways that are known to be required for valvulogenesis. If successful, this approach will allow us to precisely define the molecular and biomechanical factors that are required for valve formation. Moreover, it will lay the groundwork for valve growth in vitro, which may impact the understanding and treatment not only of lymphatic dysfunction, but also valvulopathies of the heart and venous systems. 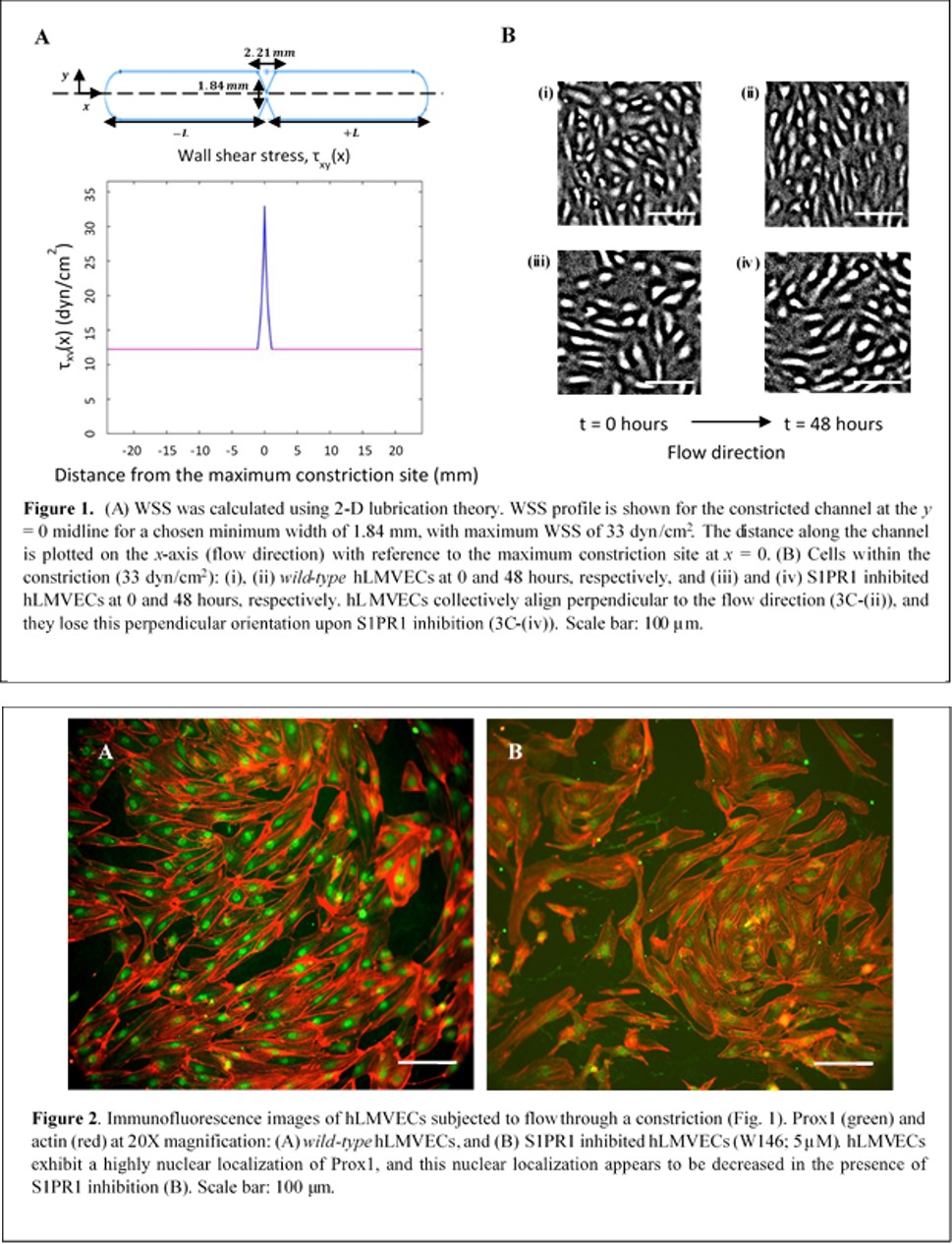