Often real-world size problems have many uncertain parameters with multiple realizations. Therefore, the MSSPs of these problems quickly become computationally intractable. One approach to address the complexity is to solve them using sample average approximation approaches where a subsets of scenarios generated from the full scenario set is considered. The solutions can be used to generate bounds for the full space problem, or can be implemented as heuristics. The challenge with this approach is that the traditional NAC reduction procedures are not applicable when only subsets of scenarios are used (Apap and Grossmann, 2015).

In this talk, we present a graph theory based algorithm, Sample Non-Anticipativity Constraint algorithm (SNAC), to determine the minimum number of NACs for the scenario subsets, and to efficiently generate at least one of the corresponding feasible NAC sets. The SNAC assumes that the scenarios are a subset of the full space scenario set, and that that the full space scenario set can be projected onto n-dimensional integer lattice, where n represents the number of uncertain parameters. This projection simply requires that the realizations of each uncertain parameter can be mapped to an integer range with a length equal to the number of realizations. The mapping allows the generation of an n-tuple representing the position of a scenario on the integer lattice.

The first step of the SNAC algorithm is to map the subset of scenarios to the full space integer lattice. The algorithm then adds edges to the lattice until the lattice forms a minimum spanning tree (MST) for the subset. The weight of each edge is set to its Euclidian distance for generating the MST. Using a MST connection, the procedure prioritizes connections of adjacent nodes and eliminates the need for redundant connections. The edges added in the generation of the MST represent the NACs needed to relate the selected scenarios. If the problem has only one stage of realizations (i.e., the problem is a two-stage stochastic problem), the added constraints also represent all the full set of NACs needed for the problem.

In MSSPs, when a realization occurs the scenario set is divided to form subsets. In order to achieve a feasible solution, all scenarios in each subset must be connected with proper NACs. The SNAC algorithm uses the MST generation procedure to generate the connections for each subset. To ensure that connections exist for any possible subset, the SNAC algorithm iterates over the possible subsets. To facilitate the enumeration of the subsets, the algorithm exploits the integer lattice mapping, which ensures that the division of the scenarios into subsets always occurs perpendicular to the plane of the realized uncertain parameter. For each subset, the algorithm reduces the number of NACs by using connections that were generated in previous subsets.

Figure 1 shows the results of applying the algorithm four times. In each application, samples of four scenarios selected from an MSSP with two uncertain parameters, 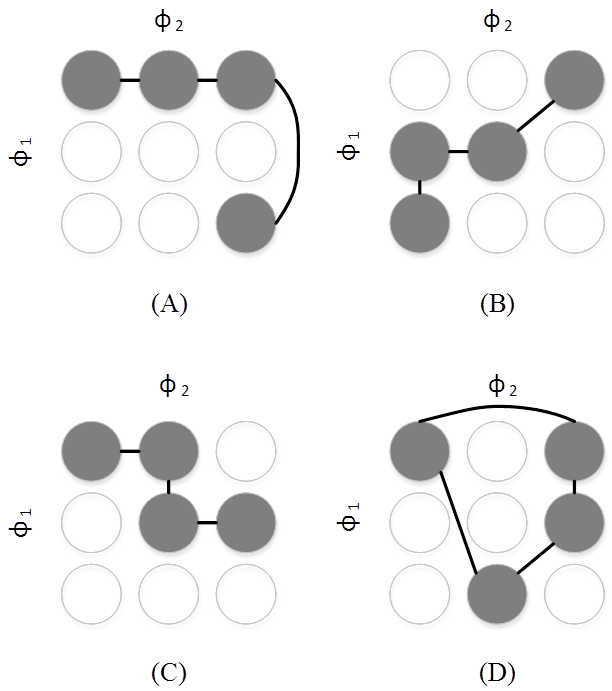