Sustainable management of food wastes as well as animal manure and other agricultural wastes is a major challenge facing food production worldwide. The dairy and food industries generate approximately 19 and 36 million tons of waste per year, respectively, only in the U.S. The majority of these residues, rich in organic carbon and valuable nutrients, are nowadays disposed in landfills. The current management strategies for manure and food waste are mainly based on biological processes, converting organic wastes into biogas (anaerobic digestion). Limited biogas conversion yield (40-50%) generates a large volume of liquid effluent, containing an aqueous mixture of carbohydrates, proteins, lipids, minerals and nutrients that should be further processed to exploit its economic value. The SmartWaste approach is a process integration strategy that uses a series of thermochemical processes to recycle multiple waste streams, producing chemicals, fuels, and nutrients. Furthermore, these fast, selective, and efficient waste-to-fuel processes can be easily integrated into current bio-refineries flow-chart.

Among recycling approaches for high water content waste feedstocks, SmartWaste proposed the hydrothermal biomass conversion technology, using both sub- and supercritical water. The suggested approach is based on three-stage processing of waste. First, the pretreatment step focuses on blending different waste streams. Achieving and appropriate feed composition is key to increase the bio-oil production yield in the second stage. In the second step, hydrothermal liquefaction (HTL) of the blended waste stream with subcritical water significantly reduces the oxygen content of the feed to approximately 10% by dewatering and condensation reactions. In the third step, the hydrogenation process, the produced bio-crude oil is further upgraded, by reducing the oxygen content.

The SmartWaste process depolymerizes organic waste into smaller structural units. The HTL step is based on fast hydrolysis reactions, followed by dehydration and condensation of sugar, lipids, proteins, and their degradation products, in a single step reaction using subcritical water. This process benefits from the modification in chemical behavior of supercritical water while approaching to the critical point conditions (374 ○C and 22.1MPa). For instance, the increase of ionic product (KW) favors ionic, and acid-base reactions without the addition of a catalyst. Therefore, the optimum processing temperature for this stage is expected to be between 250 and 350 ○C. In terms of reaction time, these reactions are usually completed within 20-60 minutes. This represents a big step towards process intensification (reduction of required reactor volume) compared to biochemical processes (enzymes) that require few days.

The main challenges facing residual biomass recycling are the highly complex polymeric composition, together with the high oxygen content, making this feed low in energy content. The flexibility of the hydrothermal technology allows the manipulation of process conditions (reaction time, temperature, pressure) to adapt to different feed compositions and achieve higher bio-oil yields (around 70% on a carbon basis), with higher energy values (oxygen content of ~10% w/w). This oxygen content represents a reduction of 70% with respect to the feed waste. As a consequence of the dehydration and condensation reactions of waste compounds for the generation of bio-oil, an aqueous-soluble carbon phase is also produced. In addition, the solubilized-hydrolyzed amount of solids is not complete, being bio-char being one the products of HTL. To complete the product distribution, a gaseous phase is also generated. The relative amount of any of these four phases depends on reaction conditions, apart from the presence of catalyst.

In this presentation, we will present experimental data for the HTL compartment of the SmartWaste project. Carbon mass balances for a wide range of biomass feedstocks will be discussed. This included modeling compounds (polysaccharides, monosaccharides, proteins and long-chain fatty acids) as well as real waste biomass (diary manure digestate collected from anaerobic digestion in upstate NY, and carbohydrate rich food waste from Cornell’s dining halls). An example for carbon mass balances is presented in Fig. 1, showing the highest production of bio-crude oil from a mixture of polysaccharides, proteins and lipids at 300 ○C with negligible char production. The quality of the bio-crude oil is showed in the Van-Krevelen diagram (Fig. 2), representing atomic rations H/C vs. O/C. HTL significantly reduces the O/C and H/C ratios for all thermal conditions studied.  During the HTL process, the quality of the oil intermediate can be highly improved by choosing the adequate biomass feed. For example, the alcoholic groups used for condensation can be synthesized 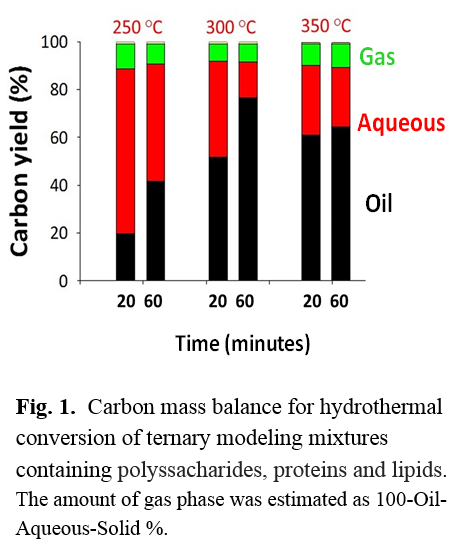 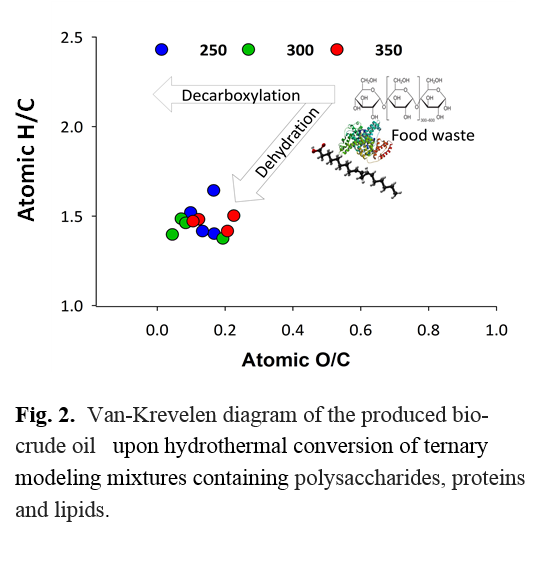 directly in the reactor by lignin hydrolysis, and high pH catalytic media can be achieved by proteins hydrolysis and ammonia release.

The target product of the SmartWaste approach is a stream of alkanes with minimal oxygen content. Further reduction of the bio-oil oxygen content by hydrogenation on supported noble metal catalysts will maximize the energy density of the final products.  The production of low polar stream of light straight-chain alkanes (4 to 10 carbons) is achieved by functional reaction routes including hydrolysis, hydrogenation, dehydration, and hydro-deoxygenation steps. Thus, bifunctional acid/redox catalysts are required for the hydrogenation step, where hydrolysis and dehydration processes are carried out on solid acid sites and hydrogenation on active metal sites of the catalyst. The SmartWaste produces carbon streams that have similar characteristics to the streams out of an oil refinery. Therefore, future production of biofuels, using small and selective hydrothermal reactors and taking advantage of the available infrastructure for oil refining, without large capital investments, is a reasonable and promising application.

In this research project it has been demonstrated that the hydrothermal liquefaction of waste biomass is an efficient process to convert low value material into enriched fuel and chemicals precursors. The HTL process was able to reduce the oxygen content of the waste streams in 70%. This represents the major oxygen reduction in the whole process. It was also demonstrated that the composition of the biomass reacting is a key factor to consider when designing the process. Adapting the correct combination of sugars, proteins and lipids could increase the carbon oil yields from 20-30% w/w up to 70% w/w.