Mismatched deformations in layered architectures of stiff coatings on soft substrates produce textured topographies. Recently this approach has been extended to create more complex, hierarchical wrinkled/crumpled textures of graphene coatings using multiple cycles of contraction, film removal, transfer, and further contraction. However, these complex multigenerational textures have only been realized in graphene-based films. We became interested in creating these complex multigenerational textures in other material systems, beyond graphene.  One possible synthetic approach would be to start with the established multigenerational textured graphene, and translate the texture to other inorganic materials (e.g., metal oxides) through sacrificial templating. In this study, a facile fabrication method is demonstrated for replicating complex, hierarchical graphene wrinkle/crumple textures in metal oxide films. The general synthesis approach is schematically illustrated in Figure 1. The fabrication involves: (1) spontaneous intercalation of metal ions into water-swollen GO multilayer films, (2) dehydration of cation-GO complexes and thermal decomposition of GO to dissociate the complexes, (3) calcination to remove the graphene template by O2 oxidation and liberate the metal oxide. To explore the generality and versatility of this method a variety of mono- and multivalent metal ions were explored as intercalants (Ag+, Zn2+, Al3+, Mn2+, and Cu2+), and a range of GO templates was applied with pre-fabricated wrinkle and crumple textures.  We find that many but not all of the metal ions and synthesis conditions produce textured metal oxides, and the optimal precursors and concentration for successful replication are reported.  Remarkably, even the finest structural features in the multiscale hierarchical GO templates can be replicated with high fidelity in ZnO, Al2O3, Mn2O3, and CuO films when using the optimal ion loading (Figure 2). Overall, this intercalation templating approach has broad applicability for the creation of complex, textured metal oxide films, and provides a bridging technology that can transcribes textures already realized in highly flexible graphene sheets into other material systems. 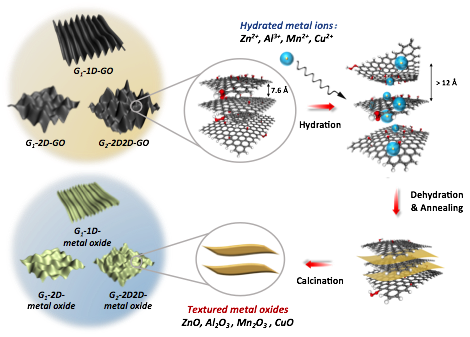 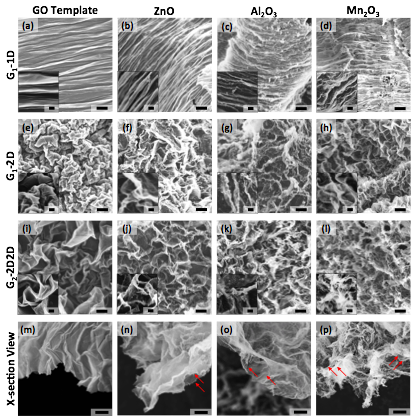