Since cell patterning on 2D surfaces has emerged as an effective tool in cell biology, the development of easy patterning methods has attracted great attention. The lithography approaches, for instance photolithography and micro-contact printing, are often used for small scale pattering. Photolithography uses ultraviolet (UV) light to transfer a geometric pattern from a photomask to a light-sensitive chemical (photoresist) on the substrate. For micro-contact printing, an elastomeric stamp (Polydimethylsiloxane) forms patterns on the surface of substrate through conformal, transient contact. However, major issues of existing cell patterning methods are the strict operating conditions and the relatively complicated procedure without a matched accuracy. In this work, an easily operated, non-contact and high throughput method to produce micro-scale pattering with a tunable laser cutting machine is introduced.

Glass substrate was used to test the impact of parameters, including laser power (3~15W) and laser speed (7.7~20.0 mm/s), on the line width. The result indicated that the line width increased with the laser power and followed the Gaussian Equation. Specially, for small laser power (<5.0W), the increase of the line width with the laser power followed a linear relationship. A 2D theoretical modal was built to simulate the heat transfer in the laser cutting process. The simulation result indicated the laser penetration depth on glass substrate was independent of the laser speed, which was further used to predict the line width at the speed of 25.0 mm/s. The relative error between the experimental and simulated results is less than 2.0%. The prediction of line width on the polystyrene petri dish with a laser power ranged from 0.9~3.3W was conducted using the acquired model and the values of the parameters were deduced for a line width of 150 μm, based on which a pattern was machined for 2D cell patterning. This work demonstrates that the micro-scale patterning with a laser cutting machine is a promising method for refined cell coordinator and accurate cell positioning. 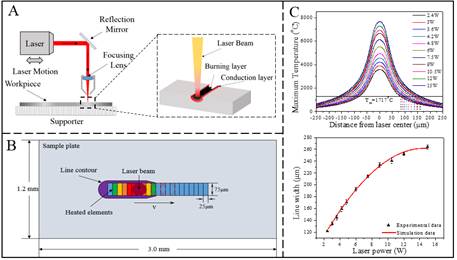 Figure 1. Schematic presentation of the laser cutting mechanism (A) and the 2D theoretical heat transfer model for laser cutting process (B). The line width was predicted using the theoretic modal (C).

<>This work was supported by the Department of Chemical Engineering, Northeastern University.