Liquid fluidization has many applications in industrial processes, such as particle classification, adsorption and ion exchange, and in wastewater treatment1. Additionally, a solid-liquid fluidized bed can operate over a wide range of particle and fluid properties (e.g. solids concentration, particle size, density, and fluid viscosity) and therefore provides ideal conditions to study the dynamic behaviour of solid-liquid systems. Specifically particle-particle, particle-fluid, and particle-wall interactions can be investigated by studying liquid fluidization2.

The turbulent nature of fluidization results in the fluctuations of the velocities and volume fractions of both the solid and liquid phases3,4. Experimental investigations with the aim of understanding the nature and magnitude of these fluctuations are necessary since: 1) these fluctuations are directly responsible for the high level of mixing taking place in the fluidization process, which in turn produces effective heat and mass transfer3; 2) such investigations are beneficial for the characterization of the dynamic behaviour of other solid-liquid flow systems such as two-phase flows in pipelines; and 3) measurements of the solid concentration fluctuations can be used to validate and improve available numerical simulations.

Solid concentration fluctuations can be classified in two categories: Large global fluctuations resulting from the bulk behaviour of the bed (i.e. circulation); and small-scale fluctuations mainly produced by the local hydrodynamics, and by particle-particle and particle-fluid interactions3. Buyevich and Kapbasov3 were the first to provide a mathematical model for prediction of the magnitude of small-scale fluctuations as a function of bulk solid concentration. Zenit and Hunt4 then measured the magnitude of small-scale fluctuations at different fluidization conditions and for different particle properties. Their results showed that in addition to the bulk solid concentration, particle size and density are contributing factors4. In this study, for the case of inertial particles (particles with the largest Stokes number tested), the measured values of the Root Mean Square (RMS) fluctuations were close to the values predicted by the Buyevich and Kapbasov model4. However, for the other particles tested (lower Stokes numbers) the magnitude of fluctuations measured by Zenit and Hunt where 3 to 10 times lower than the values predicted by the model3, depending on the particle terminal Stokes number4. The particle terminal Stokes number can be expressed as Stt = (ρs /ρf)(Ret/9), where ρs and ρf are solid and fluid density, respectively, and Ret is the particle Reynolds number at the particle terminal settling velocity.

In 2010, Gevrin et al.5 conducted a numerical study of the dynamic behaviour of a liquid fluidized bed and showed nonuniform distributions of instantaneous local solid concentration in both the vertical and radial directions. However, since the experimental data available from Zenit and Hunt’s study was limited to values averaged over the cross-section, Gevrin et al. were only able to validate their numerical solutions for cross-sectional averaged concentration fluctuations. This indicates that the magnitude of the local instantaneous distribution of particles and local concentration fluctuations must still be measured. In 2013, Hashemi6 measured the local solid concentration fluctuations for selected particles using high-speed EIT. Results from this work which were limited to particles with moderate Stokes numbers (glass beads) showed that the RMS fluctuations was not uniformly distributed over the bed cross-section (being higher in the near-wall region)6.

Based on the results of previous studies of the small-scale fluctuations, there are multiple mechanisms involved in their production, including particle-fluid interactions4, direct particle collisions3,4 and particle-wall interactions6. More studies are required to investigate the relative magnitude of these mechanisms at different fluidization conditions and for different particle properties. The focus of this study is to measure the local instantaneous concentration distribution of particles in a liquid fluidized bed and calculate the RMS fluctuations based on those measurements. These localized measurements are conducted for a wide range of particle properties (i.e. Stokes numbers) at different bulk concentrations. Here we only present the results for particles having relatively low Stokes numbers (St = 122).

The solid-liquid fluidized bed used in this study had an internal diameter of 10.16 cm. Mono-sized spherical Nylon particles (d = 6 mm, ρ =1150 kg/m3) were used as the solid phase and a dilute salt solution (CNaCl = 0.85 g/L) was the liquid phase. The fluid was circulated through the bed at different superficial velocities using a centrifugal pump. Fluid flow rate and temperature were measured upstream of the entrance to the bed. A high-speed EIT instrument (Z8000, Industrial Tomography Systems) was used to obtain the instantaneous solid concentration distribution recorded at a sampling rate of 1160 frames per second. Electrical tomography is a robust noninvasive technique with the unique ability of providing local concentration fluctuations even for opaque concentrated mixtures7,8. This technique utilizes an array of sensors to measure the electrical impedance of the medium which will then be used to deduce solid concentration using Maxwell’s equations7. The measurements conducted by EIT are used to produce a solid concentration map of the bed cross-section with 316 pixels.

The results of this study demonstrate the non-uniform distribution of the local solid concentration fluctuations over the bed cross-section for Nylon particles (St = 122). The magnitude of the fluctuations in the near-wall region was found to be 2 to 4 times greater than that of the center of the bed. These results, along with the previous work for Delrin particles (St = 94) confirm the importance of local instantaneous concentration measurements. Future experiments will focus on particles with higher Stokes numbers (800 < St < 3600). Collectively, these results can be used to create more accurate models for prediction of the magnitude of local concentration fluctuations. They can also be used to validate and improve numerical models of fluidization. 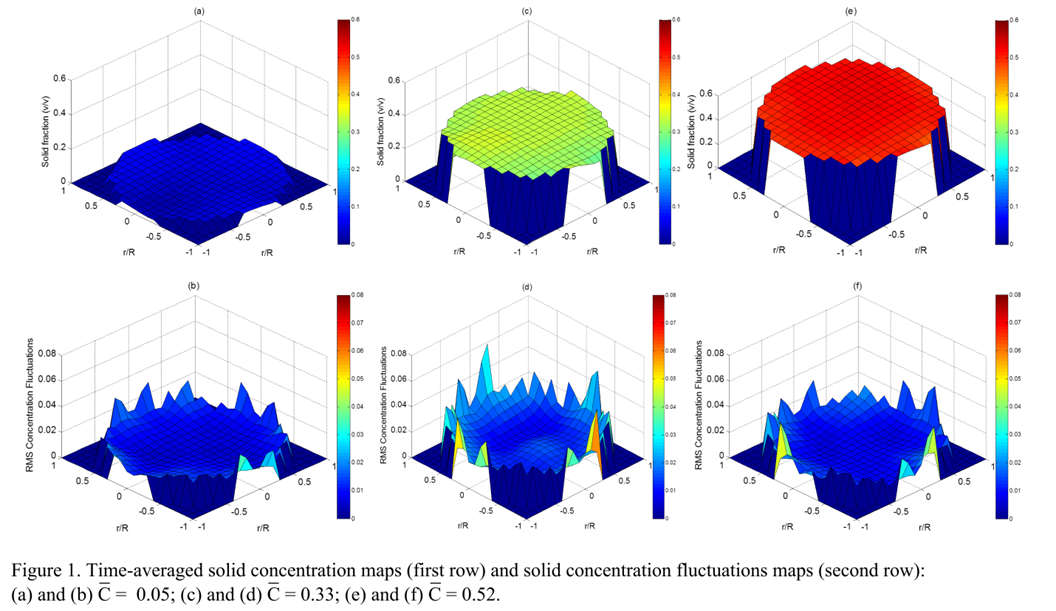