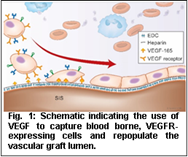 Recently our group demonstrated that immobilized VEGF can capture circulating endothelial cells from the blood in-vitro. Furthermore, we have demonstrated proof of concept by implanting a-cellular tissue engineered vessels (A-TEVs) comprised of SIS immobilized with heparin and vascular endothelial growth factor (VEGF) into the arterial system of sheep which remained patent (92%, n=12) for 3mo (Fig.1). Upon analysis, the lumen of these grafts was comprised of a fully functional endothelium as early as 1mo post implantation. This study sought to identify the type of cells that are captured by VEGF on the lumen of A-TEVs in-vivo and understand how these cells turn into an endothelial (EC) monolayer that is capable of maintaining patency in-vivo. A-TEV implantations were performed as previously published. In-vivo Analysis: Fixed explants of 1wk, 1mo, 3mo, and 6mo VEGF functionalized A-TEVs are assessed via IHC for MC and EC markers. In-vitro Capture under Flow: Capture of VEGFR expressing cells from blood under flow will be assessed in a microfluidic device with a flat surface comprised of chitosan, heparin, and VEGF (CHV) as previously published. In-vitro differentiation: Blood borne mononuclear cells that are captured on surface immobilized VEGF are coaxed to differentiate into EC with a combination of soluble and biophysical signals. A-TEVs were implanted as interpositional grafts into the arterial circulation of an ovine animal model. As early as 1mo post-implantation, the graft lumen was fully endothelialized as shown by IHC for EC markers, CD144 and eNOS. At the same time, luminal cells co-expressed leukocyte markers CD14 and CD163 (Fig. 3). To understand these results, we performed cell capture experiments under flow using microfluidic devices. Interestingly, blood mononuclear cells expressing high levels of VEGF receptors were captured on CHV surfaces with high specificity under a range of shear stresses. Initially, these cells expressed high levels of CD14 and CD16. Under the right conditions they were coaxed to differentiate into an EC phenotype as shown by expression of CD144 and eNOS (Fig.2), additional IC analysis, WB, qRT-PCR, and flow cytometry. We will also discuss the role of soluble signals and biophysical forces in transdifferentiation of blood cells into EC that maintain graft patency. We demonstrate the ability of VEGF functionalized surfaces to capture cells directly from the blood in-vitro and in vivo. In the presence of the right biochemical and biophysical signals these cells differentiate into EC like cells that maintain graft patency and vascular function. Our results shed light into the process of vascular tissue regeneration in situ using the body’s regenerative capacity. 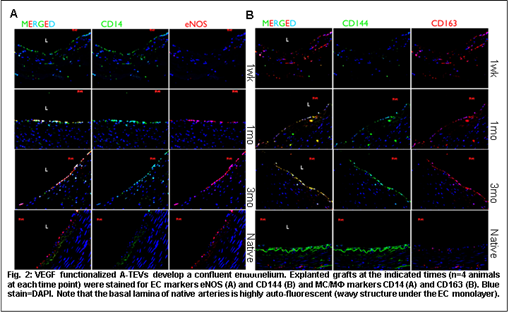 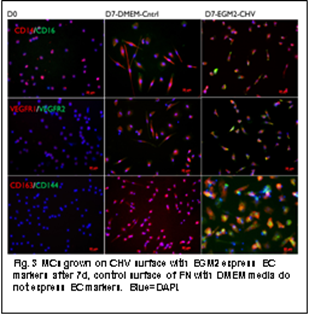