The state of the art requires the synthesis of nanostructured materials to be used as electrodes, which will show improved electro-catalytic activity and bulk transport, thus in-turn providing better electrochemical performance. Chemical synthesis methods show limitations in obtaining reduced particle sizes. For example on adopting a chemical synthesis method an average particle size of 40 nm was obtained of GaBaCo2O5+d (GBCO). Herein an attempt is made to reduce the particle size further by using a relatively green and novel top-down bio-milling process. The GBCO powder was subjected to a fungus, Sacchromyces cerevisiae, which was cultured in 250 mL YPD medium for 96h at 301K. We report the reduction in particle size of phase pure (fig1a) GBCO to a size lesser than 20 nm as observed using HR-TEM. Thin-film of La0.6Sr0.4Co0.2Fe0.8O3-d (LSCF) electrodes (thickness ~500 nm), were fabricated using a spray deposition method. In order to test the electro-catalytic performance of the GBCO nanoparticles, symmetric cells of GBCO on gadolin doped ceria (GDC) electrolyte were fabricated and electrochemical performance measured in area specific resistance was compared to the chemically synthesized GBCO (fig1b).Molecular dynamics simulations were performed to study the transport of oxygen anion [1] in anisotropic GBCO. The diffusivity of the GBCO was observed to be thermally activated with an activation energy (Ea) of 50.8 kJ/mol (fig1d).The diffusion coefficient was calculated to be of the value of 5 x 10-8 at 873K in a-b plan which was observed to be higher by an order of magnitude in comparison to the diffusion c axis (3.33 x 10-9 cm2 s-1) (fig1c). Similarly, the effect of Fe dopant on diffusivity at B site was measured in case of GdBa0.5Sr0.5Co2-xFexO5.5 structure for x = 0 to 1. Where, it was concluded that the oxygen anion diffusion was maximum in case of 50% Fe substituted composition as shown in Table1

Figure 1: a)XRD and HR-TEM image of biomilled nanoparticle, b) Nyquist plot of GBCO 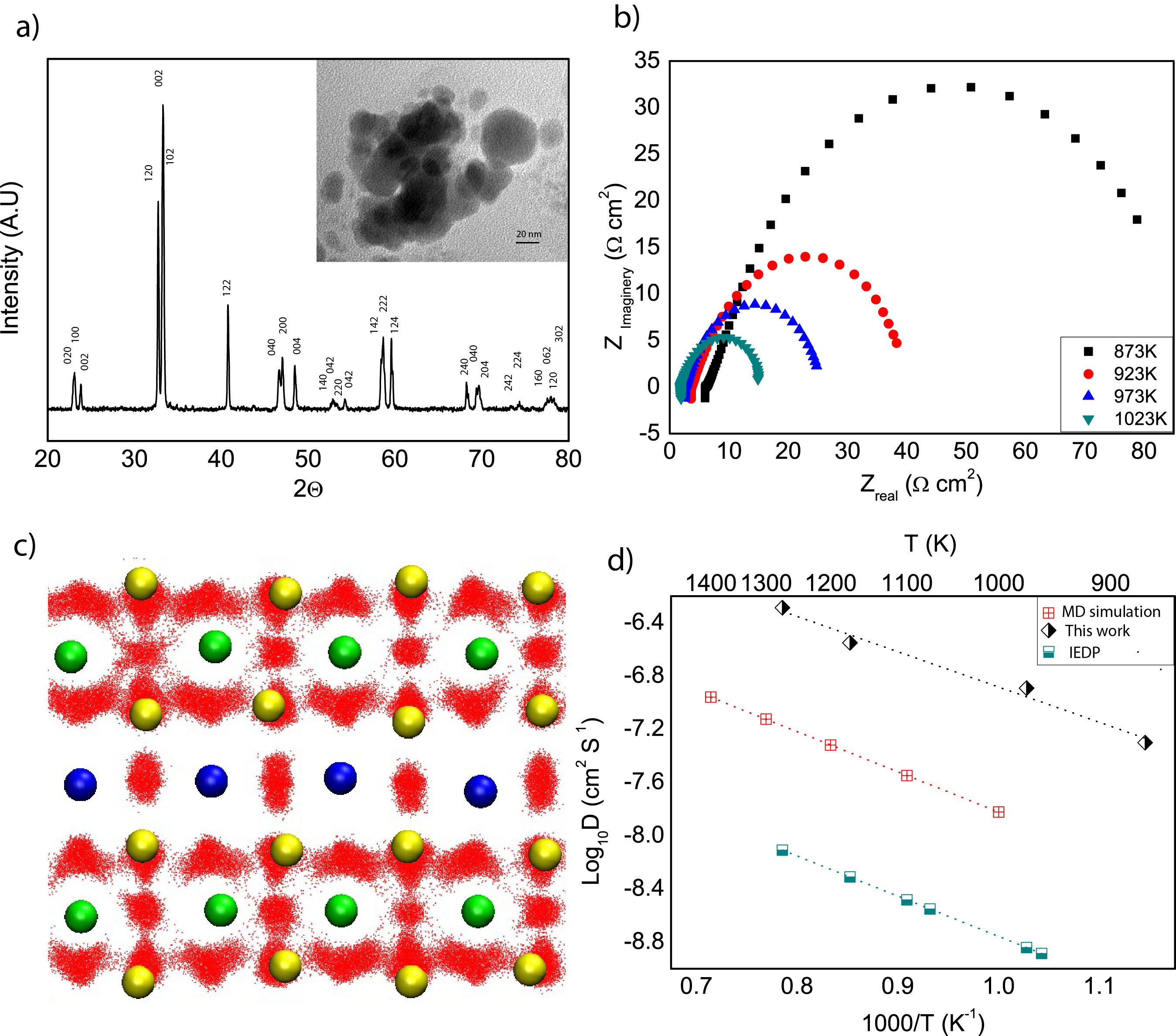