Equilibrium adsorption of gas phase mixtures of D- and L-alanine (Ala), serine (Ser), phenylalanine (Phe) and aspartic acid (Asp) onto the naturally chiral Cu{3,1,17}R&S and achiral Cu(111) and Cu(100) surfaces has been studied by both experiment and DFT-based modeling.  Isotopically labelled *L-amino acids (HO213CCH(NH2)-R) and unlabeled D-amino acids allow mass spectrometric enantiodifferentiation of the adsorbed species during temperature programmed decomposition, following equilibrium adsorption.  Measurements of the relative equilibrium coverages of D- and *L-amino acids on the Cu{3,1,17}R&S surfaces, qD/R /q*L/R = q*L/S /qD/S, at gas phase partial pressure ratios of P*L/PD = 0.5, 1, and 2 indicate that the D-Ala and *L-Ala conglomerate phases are more energetically stable than a D*L-Ala racemate phase, but that their adsorption energies are not measurably enantiospecific, DDEDL » 0.  In contrast, the adsorption of D-Asp and *L-Asp on the Cu{3,1,17}R&S surfaces exhibits measurable enantiospecificity, DDEDL » 3 kJ/mole.  The surprising observation is that even on achiral surfaces such as Cu{111}, exposure to non-racemic mixtures of D-Asp and *L-Asp in the gas phase, P*L/PD = 0.5 or 2, can result in dramatic enhancement of enantiomeric excess on the surface, qD /q*L = 0.06 and 16, respectively.

In general, we show that the enantiospecific adsorption of chiral molecules on chiral surfaces is dictated by two competing forces the enantiospecificity of adsorption energetics and the propensity of enantiomers to disproportionate into homochiral (conglomerate) or heterochiral (racemate) clusters.  These phenomena have been studied by measuring the surface enantiomeric excess, ees, of mixtures of chiral amino acids adsorbed on Cu surfaces and in equilibrium with gas phase mixtures of varying enantiomeric excess, eeg.  Ala adsorption on Cu{3,1,17}R&S surfaces is non-enantiospecific, ees = eeg, because Ala enantiomers do not interact with either the surface or one another enantiospecifically.  Asp adsorbs enantiospecifically on the Cu{3,1,17}R&S surfaces; ees ¹ eeg, even during exposure to a  racemic mixture in the gas phase, eeg = 0.  Exposure of the achiral Cu{111} surface to non-racemic Asp, eeg ¹ 0, results in local amplification of enantiomeric excess, |ees| > |eeg|, as a result of homochiral disproportionation.  Finally, in spite of the fact that the Cu{653}R&S surface are chiral, the adsorption of Asp mixtures is dominated by homochiral disproportionation of adsorbed enantiomers rather than enantiospecific adsorbate-surface interactions, |ees| > |eeg|.  All of these types of behavior are captured by a Langmuir-like adsorption isotherm that also describes competition between enantiospecific adsorption and both homochiral (conglomerate) and heterochiral (racemate) clustering of adsorbed molecules (Figure). 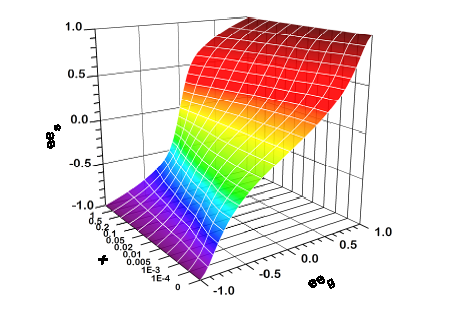