The demand for sustainable and efficient continuous processing makes micro-fluidic devices, with dimensions in the sub millimetre scale, an attractive option. Two-phase flow chemical operations in microchannels offer significant advantages compared to large-scale processes, such as lower sample consumption, increased safety and high surface-to-volume ratio. However, most studies are limited to Newtonian fluids although fluids with non-Newtonian rheology are very common industrially, including catalytic polymerization reactions, food processing and enhanced oil recovery [1-2]. The present work investigates the dynamics of plug formation of a non-Newtonian shear-thinning aqueous solution and a Newtonian organic fluid in a circular, glass microchannel using a two-colour micro-PIV system. There are, to the authors knowledge, no previous μ-PIV studies in liquid-liquid micro-flows involving non-Newtonian fluids where velocity fields are captured simultaneously in both phases.

Two aqueous glycerol solutions containing xanthan gum (1000 and 2000 ppm) are used as the non-Newtonian fluids while silicone oil (Sigma-Aldrich) is the Newtonian phase. Two oils with different viscosities, 5 and 155 cSt have been considered. The corresponding Newtonian aqueous solution is also used for reference and comparison. All runs are carried out in a circular glass microchannel (Dolomite microfluidics) with inner diameter 200 μm at different combinations of flow rates of the two phases, that varied in the range of 0.01-0.1 ml/min. Using separate syringe pumps (KDS), the two immiscible fluids are introduced in the microchannel via a T-junction. In the two-colour micro-PIV experiments the aqueous phase is seeded with 1 μm carboxylate-modified microspheres FluoSpheres with orange fluorescent colour (540/560 nm) whereas the organic phase is seeded with 1 μm blue polystyrene microspheres particles Fluoro-Max (350/440 nm). The illumination is achieved with a UV double pulsed Nd:YAG laser (Litron Lasers) and the light emitted from the seeded fluids in the test section is led from the microscope to a beam splitter (Andor Technology). Each wavelength of the emitted light is led subsequently to a separate CCD camera. Both cameras are connected to a laser pulse synchronizer (TSI) and a PC. Image processing software (Insight 4G, TSI) is used for extracting information from the acquired video images. The flow is also visualized using a high speed CCD camera and a light source for the illumination of the test section.

Under the specific experimental conditions, the organic 5 cSt Newotnian phase always forms the dispersed plugs irrespective of the side branch of the T-junction used to introduce it in the main channel. In the case of the viscous oil 155 cSt, the phase continuity is inversed and the aqueous non-Newotnian phase forms the plugs whereas the organic phase is now the continuous one.

During the plug formation different stages of detachment can be observed [3]. Using the two-colour μ-PIV, averaged velocity profiles were obtained in each phase for different locations of the plug, determined by the position of the plug tip inside the main channel. The velocity fields for the viscous oil 155 cSt (Figure 1) reveal that the continuous phase resists the flow of the dispersed phase at the rear of the plug causing a change in the interface curvature (QC / QD = 2).

In every case a thin filament was produced whose length depends both on the flow rate and the viscosity of the fluids. For the same stage of breakage and same flow rate (QC / QD = 2), the effect of shear-thinning behaviour is presented in Figure 2. The dynamics of the filament breakage change depending on the amount of xanthan gum in the aqueous phase and consequently on rheology of the fluid. For the 2000 ppm non-Newtonian case, the break-up point has moved further downstream and the breakage time is increased. This thin film eventually produces small droplets. The droplet diameter inceases with increasing amount of xanthan gum into the aqueous phase. 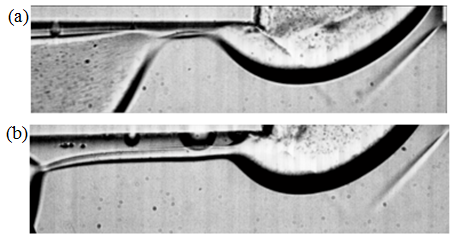 The experimental results have also been compared with numerical simulations using the CODE BLUE which is a massively-parallel Navier-Stokes solver for both Newtonian and non-Newtonian multiphase flows. The method for the treatment of the fluid interfaces and capillary forces uses a parallelized Front Tracking/Level Set technique which defines the interface both by a discontinuous density and viscosity fields as well as by a local triangular Lagrangian mesh. This structure allows the interface to undergo large deformations including the rupture and/or coalescence of fluid interfaces. Comparisons between experimental and numerical results on the formation of the plug at the channel inlet with the 155 cSt silicone oil can be seen in Figure 3.

The effect of the non-Newtonian rheology on the characteristics of the fully-formed plug flow in the main channel can be seen in Figure 4 for the less viscous, 5 cSt, oil. For constant flowrates, the plug shape changes as the amount of xanthan gum increases. The plug acquires a bullet-shape profile with the front part curved due to the viscous forces (Figure 4b) while the rear part is similar to the Newtonian case. 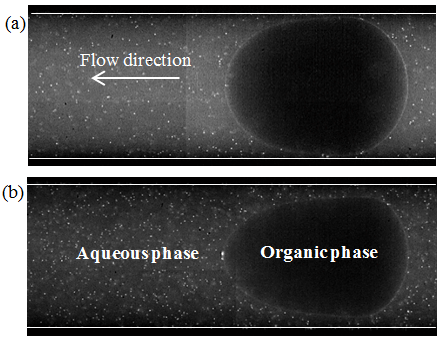