Investigation of phase separation phenomena in a

Many new chemical entities (NCEs) are failing to progress through drug-development pipelines due to a display of insufficient bioavailability, stemming from the extremely low aqueous solubility properties of many of these materials. The overwhelming majority of these NCEs are small-molecule, crystalline solids so lend themselves to formulation in the higher solubility but thermodynamically unstable amorphous form. A common approach to the formulation of amorphous APIs is through the use of an amorphous solid dispersion. In order to stabilise the thermodynamically unstable amorphous form an excipient to which the API exhibits an affinity through molecular interactions is added during formulation.

Recent publications have suggested that even in cases in which interactions between an API and a biocompatible polymer has been detected, in order to produce an acceptable solid dosage form the amorphous API could be present at a loading above that which is thermodynamically stable. At the required higher drug loadings successful long-term stability appears to be achieved through a combination of thermodynamic and kinetic mechanisms.

Itraconazole (ITR) was used as a model poorly aqueous soluble drug and Soluplus and hydroxypropyl methylcellulose phthalate (HPMCP) were investigated as compatible excipients for the formulation of a ternary amorphous solid dispersion. The value of the Flory-Huggins interaction parameter and its dependence on temperature was determined for Itraconazole with each polymer as well as a 1:1 blend of both polymers using the dissolution end point method. This method determines the liquid-solid boundary in the API-polymer binary system by measuring the endset of melting during a heating ramp in a differential scanning calorimeter (DSC). The melting point value gained from this method was further investigated using a 16-hour annealing method which indicated that the liquid-solid curve had been underestimated for both polymers. The annealing method involved the use of hyper DSC and a heating rate of 100°C/min to search for the presence of residual crystalline API following a 16 hour hold at or below the temperature gained using the dissolution end point method.

It is known that the dissolution end point method of determining the liquid-solid curve in high viscosity systems such as these can overestimate the drug melting temperature, however the greater accuracy associated with the annealing method should be considered against the much greater period of time required to gain a phase diagram data point.

Following production of the three phase diagrams a number of amorphous solid dispersions with a range of drug-polymer compositions were produced through ball milling and a subsequent melt-quench. Hyper DSC was used to measure the temperature and width of the glass transition and confirm the absence of crystalline API. Itraconazole is also known to form a liquid-crystal state but the thermal events associated with this state were not apparent in the any of the thermograms of the solid dispersions. The dispersions were stored at 100°C which is within the region of the phase diagram where spontaneous spinodal decomposition should occur (Figure 1). After one week phase separation had occurred in all samples but the development of two distinct demixing mechanisms was apparent. At higher drug loadings demixing occurred by a release of the API by recrystallisation. At lower drug loadings the amorphicity of the formulations was maintained, however two distinct amorphous phases appeared, identified by two separate glass transition events. The change in demixing from recrystallisation to phase separation was observed in all of the three systems examined but shifted in drug-polymer ratio depending on the polymer(s) involved. 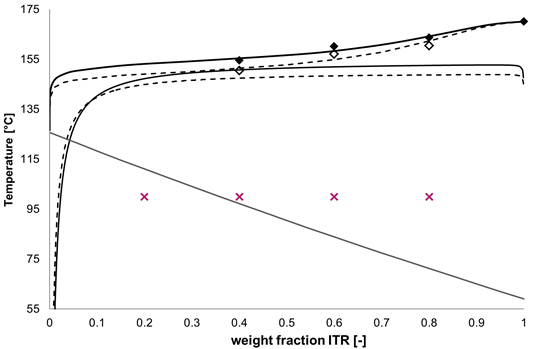 Figure 1: Phase diagram of the ITR-HPMCP-Soluplus system indicating the boundaries identified using the dissolution end point (full line) and annealing (dashed line) methods and the points at which phase separation was investigated (crosses). The upper boundary marks that between liquid and solid API while the lower is the spinodal curve.