Controlling radical polymerizations has already been undertaken to a wide range of monomers. However, it is still a challenge to gain control over the free-radical polymerization of less activated monomers like ethene due to their high radical reactivity.1Furthermore, especially ethene tends to show side reactions like inter- and intramolecular transfer while polymerizing. The reaction network of the ATRP of ethene can be seen in the figure below. The transfer reactions to polymer are not shown here not to overcrowd the scheme. 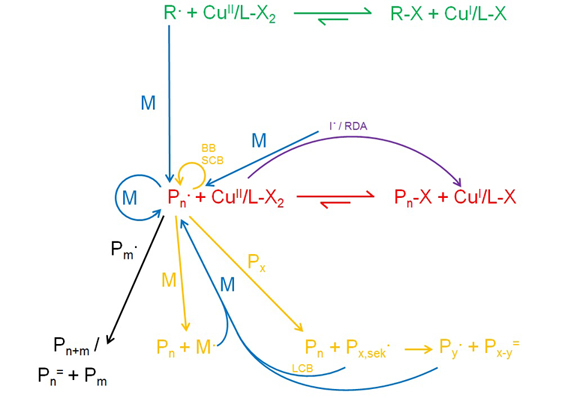 There have been several research activities on the field of controlled radical polymerization (CRPs) of ethene. Under mild conditions of 70 °C and 200 bar and in solution one could achieve slight control via the RAFT-mechanism, but the resulting polymers had low molecular weights.2 In order to maintain high molecular weights pressure and temperature have to be increased significantly. At 2000 bar and 125-250 °C one could gain high molecular weighted polystyrene and polymethacrylates by introducing TEMPO derivatives, but no control could be achieved in the case of polyethylene.3 Luft et al. found a decreased polydispersity index (PDI) for polyethylene when using other derivatives for nitroxyl mediated polymerizations (NMP), but they were still above 2.7. However, molecular weights were rather high (Mn>8.1*104 g/mol).4 Slight control over the ethene polymerization could be achieved at 2000 bar and 175 °C by reversible addition-fragmentation chain-transfer polymerization (RAFT).5 The advantages of high-pressure ATRP were only examined for (meth)acrylate homopolymerizations, yet.6,7

The present work deals with the control over the radical polymerization of ethene with comonomers by ATRP under 2000 bar and various temperatures in order to gain polymers with low polydispersities and functionalized end groups. In a first step the reagents are tested for their thermal stabilities under reaction conditions in a high pressure differential thermal analysis (DTA). Next, polymerizations are carried out in a stirred high pressure batch autoclave with injection system. They are conducted at different temperatures with various comonomers (butylacrylate, butylmethacrylate among others) and controlling agents (CuBr/Tris(2-pyridylmethyl)amine (TPMA) and CuBr/N,N,N´,N´´,N´´-Pentamethyldiethylene-triamine (PMDETA) complexes). Furthermore, reducing agents like 2,2´-Azobis(2-methyl-propionitrile) (AIBN), ascorbic acid and Tin(II) 2‑ethylhexanoate (Sn(EH)2) are introduced in order to regenerate the controlling agent.

The resulting polymers are analyzed regarding their molecular structure: the molecular weight distribution is obtained by high temperature GPC in trichlorobenzene; branching, chain end functionality and copolymer composition are examined by using inverse gated HT‑13C- and HT-1H-NMR-spectroscopy.

In the experiments the PDI decreased compared to a free radical reference sample, synthesized under the same conditions. Furthermore, molecular weights are relatively high (Mn up to 5.2*104 g/mol). However, the detection of halogen chain ends by 13C-NMR is challenging.