The production capacities of polypropylene and propylene oxide, cumene and acrylic acid have grown over the past decades leading to an increased demand in propene. The most common source of propene is currently the cracking of naphtha, which is not sufficient to meet the present demand [1]. A promising alternative is the direct conversion of ethene to propene (ETP-reaction). The suggested reaction mechanism for this overall reaction consists of three steps [2]. The first step is the dimerization of ethene to 1-butene. Secondly 1-butene is isomerized. In the final third step the produced 2-butene reacts with unconverted ethene via a metathesis reaction and gives propene [2].
Ni loaded aluminized MCM-41 is a promising catalyst for the described reaction scheme, because it is capable of supporting all three steps. However, this catalyst represents a complex integrated system.
In previous works different preparation methods of the catalyst have been developed [2, 3]. In this presentation a decoupled approach is followed. For this, a two-catalyst/two-reactor concept is studied, in which the metathesis step is separated from the dimerization and isomerization (Fig. 1). As a consequence the system gains degrees of freedom with respect to residence time, temperature and specific feed composition.

The support MCM-41 and its aluminated counterpart with different Si/Al ratios were synthesized using two different procedures, reported in references [3, 4]. The incorporation of Ni and the most common metathesis metals Re, Mo and W onto the supports was realized using the template ion exchange (TIE) method and incipient wetness impregnation (IWI) method [3]. The catalysts were characterized by XRD and N2-physisorption.
The testing of the catalyst activity was carried out in a fixed bed reactor. For the experimental investigation of the ETP-reaction a fraction of ethene in N2 was fed into the reactor. Then, investigations of metathesis catalysts were conducted with an equimolar mixture of ethene and 2-butene (trans-butene) at atmospheric pressure. The temperature for the catalytic testing was modified in the interval from 50 to 475 °C by increments of 25 °C. The feed and reaction products were analyzed by online gas chromatography and mass spectrometry.
Objective of a carried out kinetic investigation is the identification of conditions for optimal conversion of the reactants and yield of propene. Additionally it is of interest to suppress the production of byproducts, such as pentene and hexene. While working with hydrocarbons, furthermore, the formation of coke and thereby the blocking of active sites should be minimized in order to prevent deactivation processes.
The Ni catalysts (“Cat. 1”) for the ETP-reaction revealed high activities with high specific conversions of the reactants and a selectivity of approximately 25 % for propene only at temperatures higher than 400 °C. Severe deactivation of the Ni/(Al)MCM-41 was observed, with time on stream. Though it has been shown that this catalyst can be regenerated [3] in a separate oxidative step.
In the approach of decoupled reactions Re has shown interesting activities in the metathesis step at lower temperatures (“Cat. 2”). Especially the aluminized MCM-41 with incorporated Re gave an equivalent selectivity as the Ni-catalyst at 200 °C (Fig. 2). 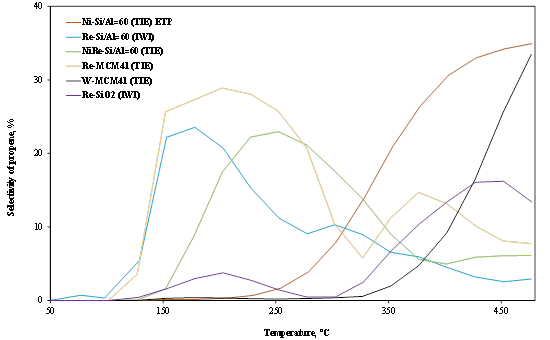 Main goal of the current work is the derivation of a kinetic model in order to optimize the reactor systems.

We would like to thank the DAAD with its PROALMEX program and Proyecto apoyado por el Fondo Institucional de CONACYT (FOINS) for their financial support.