In many particulate processes in chemical engineering fields, liquid is often added to dry powder to improve powder characteristics and ease powder handling. Examples of such processes include wet agglomeration, particle coating and catalytic reaction. When relatively small amount of liquid is dispersed in powder, liquid bridges are formed between primary particles and bonding forces are exerted on the particles, i.e. surface tension and viscous forces. In particular, viscous forces can significantly influence the powder behaviour in a process since liquid viscosity can vary many orders of magnitude depending on the applications. Therefore, it is of paramount importance to accurately estimate the viscous forces in order to understand the process.

Several viscous force models are proposed in literature based on (a) the solutions of the Reynolds lubrication equation and (b) asymptotic solutions of the Stokes equations. It is shown that these models can estimate viscous forces comparable to experimental measurements when the inter-particle separation distance is sufficiently small. However, the accuracy decreases drastically when the separation distance increases. Therefore, there is a need to derive more accurate viscous force models.

In the present work, liquid bridges between particles are directly simulated using the Volume of Fluid (VOF) method with dynamic mesh as shown in Figure 1. It can be observed that the pressure distribution obtained from simulation is in good agreement with that obtained from the solution of the Reynolds lubrication equation when the separation distance is small (Figure 1a), whilst the difference becomes significant when the separation distance becomes large (Figure 1b). The forces exerted on the particles obtained from the simulations are then used to derive an improved viscous force model. 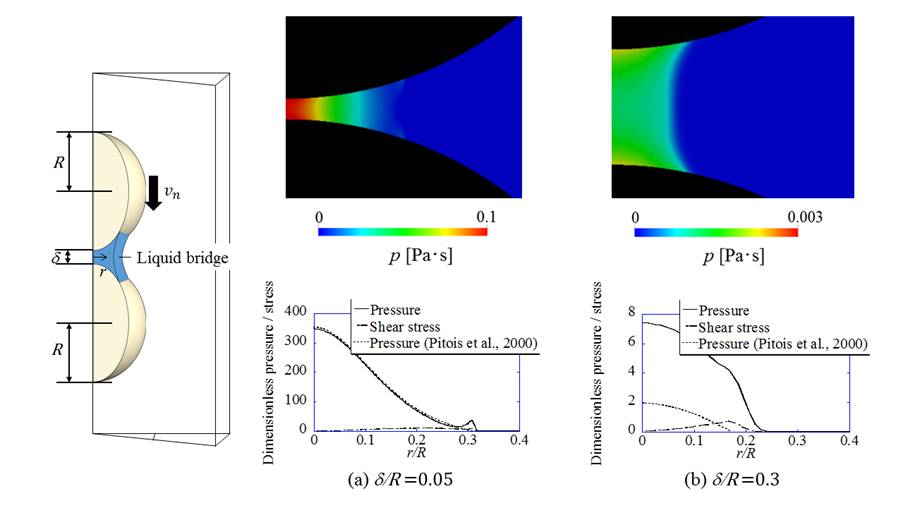