An ongoing challenge in computational electrochemistry is the accurate determination of electrochemical barriers due to the large cost associated with using adequately-sized cells to eliminate any artifacts contributing to the final result. A recent publication from our group provides a simple method to obtain these barriers more efficiently by employing a capacitor model.1 DFT calculations using this capacitor model have demonstrated, contrary to accepted knowledge, that the charge of a hydronium (H3O+) ion in the outer Helmholtz plane is not +1, but closer to +0.6. Thus, it is the goal of the current project to understand whether this is a physical phenomenon and the implications thereof on how we fundamentally treat electrochemical barriers. 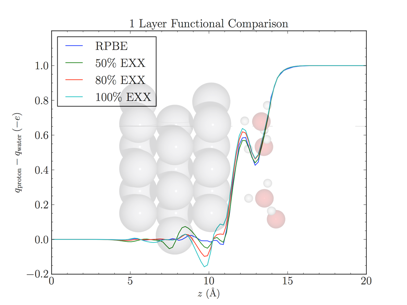 Figure 1. Cumulative charge difference between the protonated system (Pt slab + water + H) and the system with one fewer H (Pt slab + water) as a function of the z-coordinate of the unit cell, calculated with various functionals. Including various amounts of exact exchange only increases the electron density very slightly on the metal compared to GGA-level DFT. At the metal surface on the side of the solvent, there is a difference of 0.6 electrons, implying that the solvated H3O+ has a +0.6 charge instead of +1 in the first Helmholtz layer.