Injectable hydrogels generate tissue regenerative matrices in situ in a minimal invasive manner, but currently lack structural organization and unidirectional orientation. Even though diverse techniques have been developed to engineer complex 3D hierarchical constructs with highly ordered nano, micro, and macroscopic structures, these structures are mainly produced ex vivo and need to be implanted. To overcome these limitations, we engineered an injectable biomaterial that forms an anisotropic micro-heterogeneous structure in vivo. This material has the ability to mimic the local extracellular matrix architectures that cells encounter in complex tissues, such as nerves and muscles. Short magnetic polymeric fibers are produced via a high-throughput electrospinning/ microcutting technique and have the ability to align within low magnetic fields. Only low amounts of superparamagnetic iron oxide nanoparticles (SPIONs) are required to induce the alignment of these larger micron-scale fibers. The position of the oriented fibers is fixed within a fibrin gel, which induces unidirectional growth of the cells. The technique enables the production of fibers with a wide variety of feature dimensions and topography, which allow us to control and tailor the structural and mechanical properties of the anisotropic matrix with precise engineering. The low non-toxic amount of iron oxide makes this concept suitable for in vivo applications. This novel approach provides hybrid hydrogels with the ability to create macroscopic order in situ, due to shape anisotropy and magnetic alignment.

Short magnetic fibers were produced by combining an electrospinning and cryosectioning technique. Electrospinning is a reliable and scalable process for electrostatic fiber formation, which utilizes electrical forces to produce polymeric fibers with diameters ranging from a few nanometers to several micrometers. Prior to the electrospinning process, SPIONs were mixed into an 18 wt% poly (lactide-co-glycolide) (PLGA: 75:25 L:G ratio, inherent viscosity of 0.71–1 dl/g) solution at different SPION concentrations of 1, 5, and 10 wt% via ultrasonication. SPIONs were synthesized using a thermal decomposition method, and their size distribution and magnetic susceptibility was analyzed with transmission electron microscopy and SQUID, respectively.

Highly aligned electrospun smooth fibers with submicron diameters were collected on a parallel plate to obtain single fibers. The aligned fibers were harvested from the parallel plate collector, and embedded in a cryogel to enable sectioning with a cryotome. While the diameter of the fibers can be determined by the parameters, set during the electrospinning process, the length of the short fibers can be conveniently controlled by adjusting the slice thickness of the cryotome device. After dissolution of the cryogel in water, the short fibers were centrifuged to remove the cryogel, and resuspended in fresh distillated water. The magnetic response of the short fibers was measured in function of their length, SPION concentration, and the magnetic field strength, in which they were placed. The fibers were cut at four different lengths (25, 50, 75 and 100 µm) and filled with three different SPION concentrations (1, 5 and 10 wt%) in order to evaluate their orientation time in the presence of different magnetic fields strength (100, 200 and 300 mT). The orientation time of the short magnetic fibers was determined by analyzing time lapse images of orienting fibers. Finally, the oriented short fibers were fixed inside a macroscopic surrounding fibrin hydrogel to cultivate L929 fibroblasts cells and test their behavior inside this 3D injectable anisotropic matrix.

The synthesized SPIONs demonstrated a narrow size distribution with an average diameter of 5.21 ± 0.97 nm. They were mixed at different concentrations within the PLGA solution before electrospinning to render magnetic fibers. In order to obtain single and monodisperse short fibers, a high alignment efficiency and singularity of the long collected fibers is crucial. The parallel plate collector enhanced the evaporation rate of the PLGA solvent and resulted in highly aligned and single fibers with an average diameter of 721 ± 104 nm (Fig.1a). The cryocutting led to four different sets of fibers with average lengths of 25.54 ± 1.77 µm, 51.06 ± 2.75 µm, 78.46 ± 1.17 µm, and 101.09 ± 5.01 µm (Fig.1b), which were all able to align in a magnetic field of 100 mT.  Fibers, produced with a length larger than 100 µm, and thus an aspect ratio higher than 140, led to physical entanglement, and lost their ability to align. The orientation time of the short magnetic fibers decreased with increasing SPIONs concentration and increasing magnetic field strength (Fig. 1c). For fibers with a length of 50 µm, increasing the field strength from 100 mT to 300 mT reduced the orientation time with 62%, 73%, and 48% for SPION concentrations of 1, 5, and 10 wt%, respectively. In the case of a constant amount of SPIONs, we observed that shorter fiber lengths resulted in faster orientation, again proportional to the strength of the magnetic field (Fig.1d). In the case of 1 and 5 wt% SPIONs, decreasing the fiber length 4-fold, from 100 to 25 µm, led to a 65 to 75 % reduction in orientation time, depending on the magnetic field. For the highest SPION concentration (10 wt%), this reduction was even larger,  with the shortest fibers (25 µm) resulting in an orientation time that was 78 to 90 % faster than for the longest fibers (100 µm) (data not shown).

The short magnetic fibers were mixed within a fibrinogen solution in the presence of a low external magnetic field (300 mT), which led to unidirectional orientation of the fibers in the direction of the field, while the fibrinogen solution crosslinked around the fibers to form a hybrid hydrogel (Fig.1e). To obtain aligned short fibers inside a fibrin gel, the gelation kinetics of the fibrinogen was fine-tuned using enzymatic concentrations of  0.125 U/mL Thrombin and 4 U/mL Factor XIII. The oriented fibers were interlocked within the fibrin hydrogel, which preserved the anisotropic architecture of the matrix after removal of the magnetic field. Fibroblast cells were mixed together with the fibers before fiber orientation and gelation of the fibrinogen, and showed linear growth in the direction of the aligned short fibers (Fig.1f). This demonstrates that complex tissues with a specific directionality can be regenerated in vivo, by combining different biocompatible and degradable materials with low, non-toxic levels of iron oxide particles. As this novel engineered hybrid hydrogel has the ability to be injected and form an anisotropic matrix in situ, it opens new opportunities in the field of tissue regeneration. 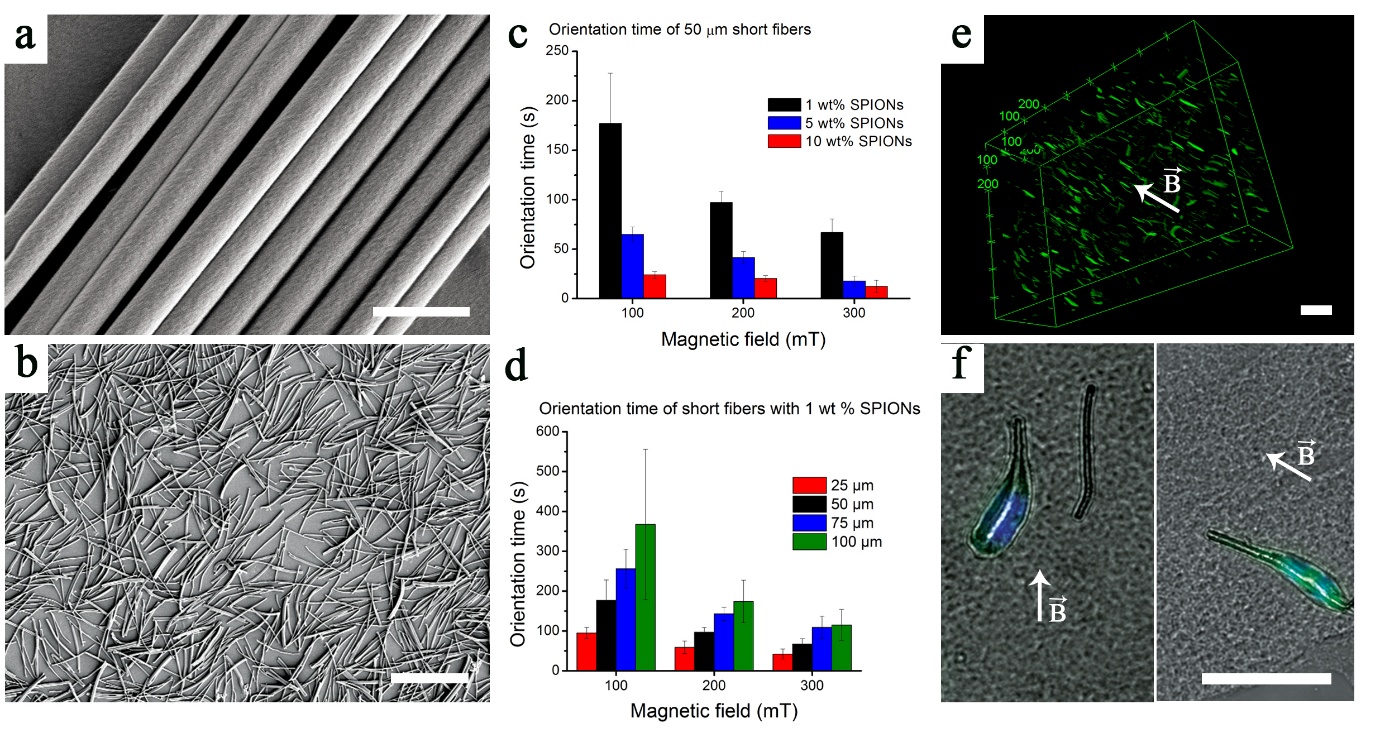 An injectable hybrid hydrogel was engineered by combining building blocks at different size-scales, which react to an external trigger, and interact with each other, in order to create an anisotropic matrix in situ. Nanoscale iron oxide particles were incorporated inside short micron-scale PLGA fibers, which were aligned and fixed within a macroscopic fibrin hydrogel. Using this method, we observed that the orientation rate of the magnetic fibers depended on the fiber length, SPION concentration, and the strength of the magnetic field. Fibroblasts, mixed within the anisotropic matrix, aligned in the direction of the short fibers, demonstrating that the topography and anisotropic architecture of the designed hydrogel provided the required physical and mechanical cues for cells alignment. This newly designed hydrogel overcomes some of the limitations of the existing injectable regenerative materials, and fills a major need in the field. It can be applied as a therapeutic material and as a tool to investigate the effect of different design parameters of an anisotropic matrix on physiological and pathological processes in vivo.