Due to the increasing complexity and multi-dimensionality of modern power plants, selecting and optimizing the architecture of control systems within a plant-wide control strategy is a challenging task.  The control problems to be solved are highly nonlinear, multidimensional, constrained, and prone to multiple extrema.  Therefore, optimal analytical or numerical solutions are in most cases impossible or impractical.  For such problems, evolutionary algorithms can provide effective solutions.  Recent efforts have identified the artificial immune system (AIS) paradigm as a promising source for mechanisms that can enhance more common evolutionary algorithms and mitigate some of their drawbacks.  The development and use of complex power plant simulation environments, such as Dynsim®, is currently receiving significant attention for a variety of applications.  However, their use for control system design and optimization has yet to reach full potential.  To synergistically merge the capabilities of evolutionary algorithms and the availability of advanced process simulation software, an interactive computational environment for the optimization of modern power plant control using evolutionary techniques is presented in this paper.

The proposed optimization algorithms are implemented in Matlab®, while the power plant may be modeled in Matlab®/Simulink® or Dynsim®.  The overall proposed architecture for control optimization including the interface between these computational environments is aimed at facilitating reaching the full potential of advanced methodologies for power plant control system design and optimization.

The general optimization scenario and specific algorithms and parameters are setup by the user through Matlab® graphical user interface menus.  The object linking and embedding for process control data access protocol is used to facilitate variable exchange between Matlab® and Dynsim®.  The interface integrates Matlab® based models and controllers into Dynsim® models.  Dynsim® feature “Scenarios” is used to facilitate further the communication.

The optimization scenario includes two options: a baseline genetic algorithm and an immunity enhanced evolutionary algorithm.  The modular architecture of the computational environment allows for the addition of new algorithms into a central library and testing and evaluation of newly developed approaches.  The baseline genetic algorithm implemented within the optimization environment features a standard architecture with randomly generated initial population, integer-based chromosome representation, roulette-wheel selection technique and elitist strategy, gene mutation, and single-point crossover.  Immunity-inspired enhancements include seeding and vaccination of initial population, hyper-mutated cloning, selection, and population diversification based on affinity to self/non-self.  These algorithms are expected to enhance the computational effectiveness, improve convergence, be more efficient in handling multiple local extrema, and achieve adequate balance between exploration and exploitation.

The functionality of the proposed optimization computational environment is illustrated through optimizing the control laws for an acid gas removal unit as part of an integrated gasification combined cycle plant.  The unit selectively removes H2S and CO2 using SELEXOL solvent.  The unit consists of numerous equipment items including trayed and packed distillation columns, pressure vessels, heat exchangers, pumps, and compressors.  These components are strongly coupled through mass and heat exchange resulting in a challenging control problem.

The general architecture of the evolutionary optimization environment is illustrated in Figure 1. 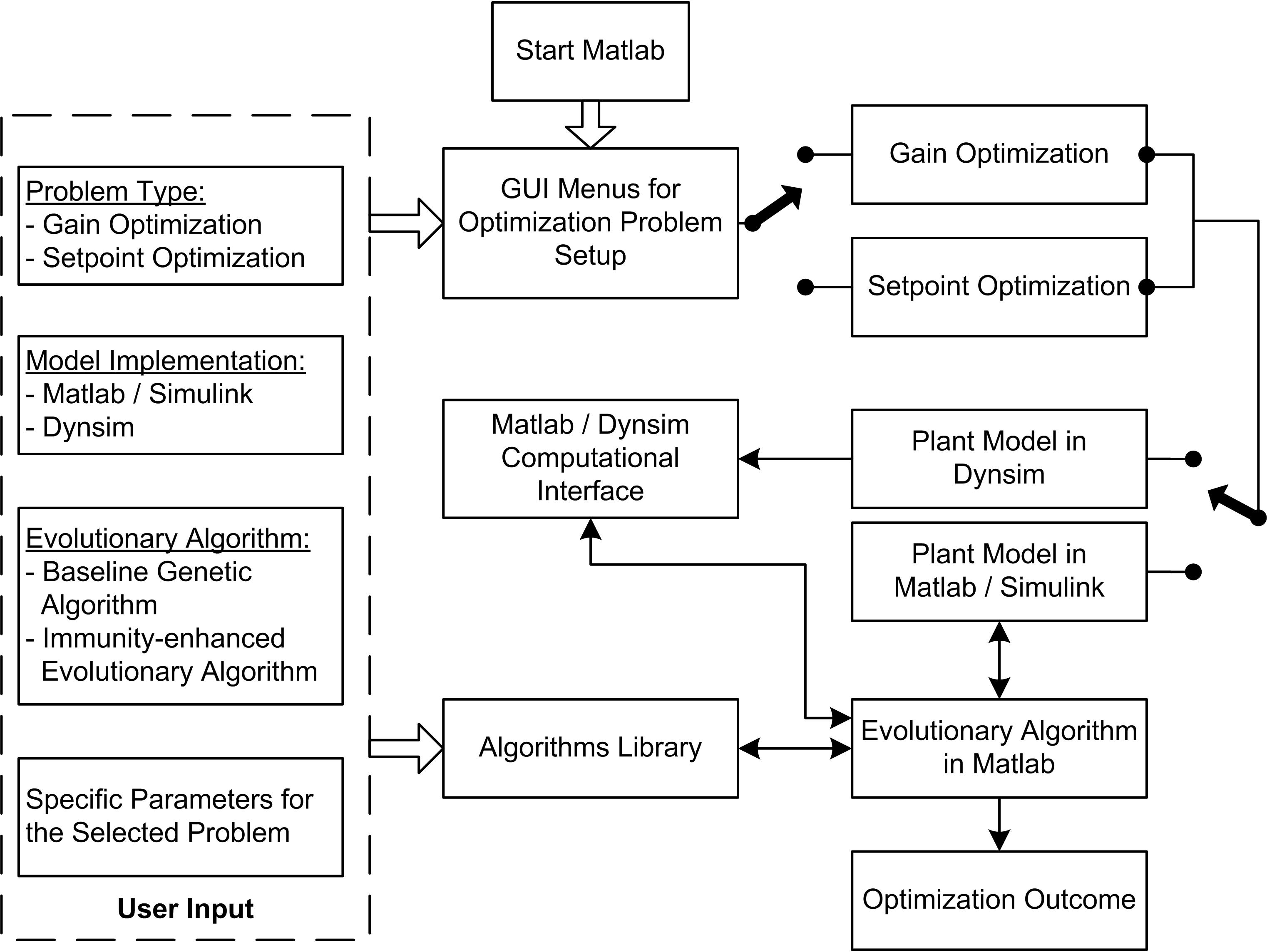