A high-pressure rheometer contained a rotor was used to determine the effect of temperature, static pressure and CO2 concentration on the viscosity of linear high-density polyethylene (HDPE) and branched-chain low-density polyethylene (LDPE). First, the molecular parameters of the two polymers were characterized by high-temperature Size-Exclusion-Chromatography (SEC). The linear HDPE possessed narrow molecular distribution of the branched chain while branched-chain LDPE present broad distribution. The CO2 solubility and diffusivity in the two polymers was investigated by using magnetic suspension balance (MSB). The gas diffusion coefficient was used to estimate the time required to saturate the sample in the gap according to the one-dimensional diffusion equation of Fick¡¯s second law.

Considered the potential existence of signal delay in the magnetic driven process and the frictional resistance, the test reliability was inspected by comparing the results of the plate geometry with the rotor using dynamic frequency sweep test. The results indicated that at low frequency range where is critical to the zero-shear viscosity, the rotor generate a little higher viscosity than the plate, however, the mechanical delay may overlaps the signal from the sample results to large error at high frequency range. Another problem that hampered the test was the stability of the sample after about 38 hours saturation at high temperature. The molecular parameters were selected to compare with the virgin pellets, indicated that the degradation was minor and acceptable.

The effect of temperature on the viscosity was studied using the rotor in the high pressure chamber with diluent-free polymer though the test may inaccurate compared with the plate geometry. The activation energy of LDPE is slightly higher than HDPE due to the relatively high free volume fraction. An inert gas, helium, was used to characterize the effect of static pressure on the rheological properties. The pressure shift factor was fitted with Barus equation, shows that there¡¯s turning-point for HDPE which is also put forward firstly to the authors¡¯ knowledge. At low pressure (<10 MPa), the pressure coefficients is slightly higher than LDPE, while at high pressure the rheological properties is insensitive to the pressure increase. This phenomenon can be attributed to the fractional free volume. Moreover, the pressure coefficients of HDPE decrease as temperature increase which is the exact opposite of LDPE. In addition, The combined effect of CO2 pressure and concentration on the rheology was investigated after more than 10 hours¡¯ saturation. Compared the thickening effect of static pressure, the plasticization of dissolved gas is predominant of the polymer rheology. Lastly, the effect of gas concentration and pressure was assumed to be separated, and the F-K model was used to describe the effect of gas concentration on the viscosity alone. 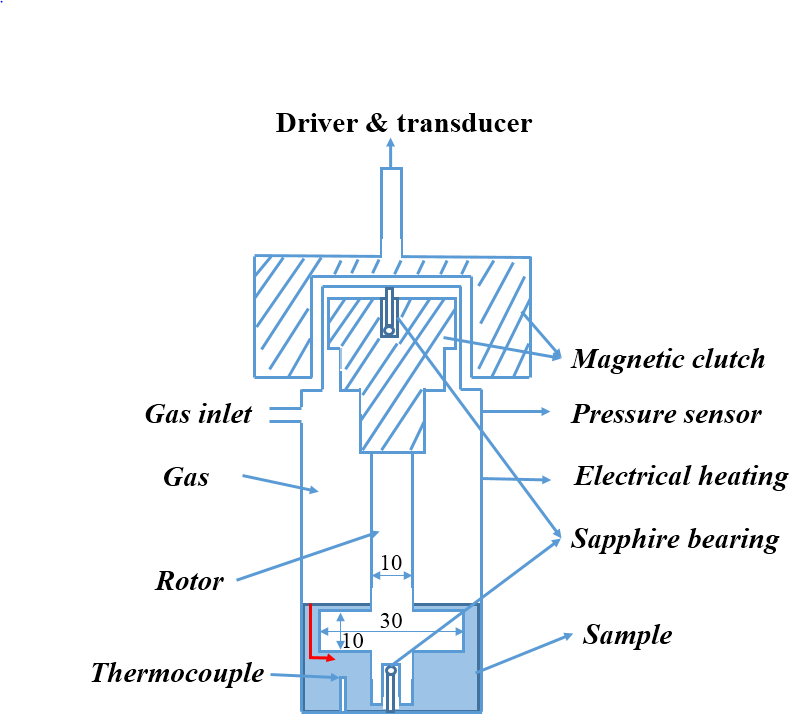 Figure 1. Schematic of high pressure attachment for the rheometer, which consist of a magnetic clutch, a pressure cell, a rotor and stator (dimensions in mm) 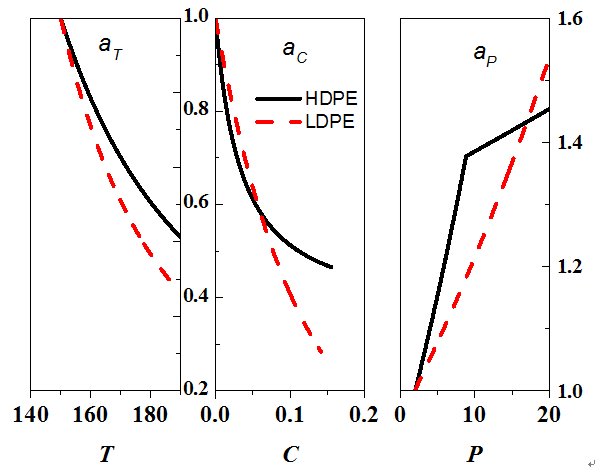