Figure 2 shows C3H6 LO using feed concentrations of 250 ppm C3H6 and 500 ppm C3H6 (λ = 1.01). Like, CO, C3H6 is self-inhibiting. The shoulder feature in the LO curves using Pd/Al2O3 and Pd/CZO/Al2O3 is speculated to be due to a change in the oxidation state of Pd and/or the accumulation of inhibiting carbonaceous surface species. LO begins at lower temperatures and the shoulder becomes less prominent with increasing CZO content and is absent with Pd/CZO.

Comparing the individual oxidations of 1% CO and 500 ppm C3H6 in Figures 1 and 2 to LO behavior during their co-oxidation (1% CO + 500 ppm C3H6) in Figure 3, LO temperatures for both species are higher in the mixture, i.e. CO and C3H6 are mutually-inhibiting. During co-oxidation, CO lights off before C3H6 and the C3H6 shoulder does not appear, suggesting that CO inhibits C3H6 adsorption and the accumulation of carbonaceous species on the catalyst. Once CO lights off and temperatures increase, C3H6 oxidation proceeds. Significantly lower LO temperatures are achieved using Pd/CZO, and higher conversions of CO and C3H6 are reached at lower temperatures using catalysts containing CZO.

Ongoing work involves the use of a mechanistic-based kinetic model incorporated into a low-dimensional monolith model [8-9]. The global reactor models are used with CO and C3H6 oxidation on Pd with steps involving ceria. The 1+1 dimensional model formulation comprises coupled species balances with transverse-average equations having external and internal mass transfer coefficients. As shown in Figure 4, the model verifies the experimental LO of CO on Pd/Al2O3. For example, it validates additional experimentally-observed oxidation behavior such as the switch in order of ignition between individual and mixture oxidations on Pd/Al2O3 and Pd/CZO/Al2O3 as well as the promotional effect of ceria. 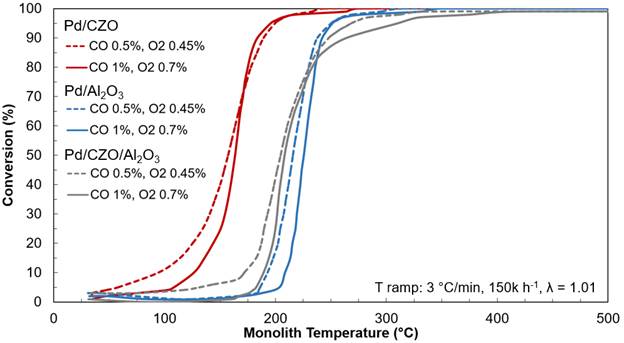 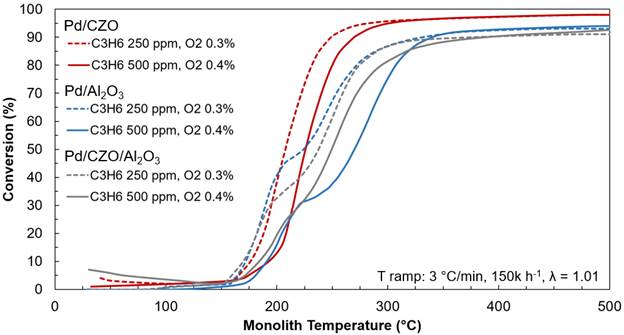 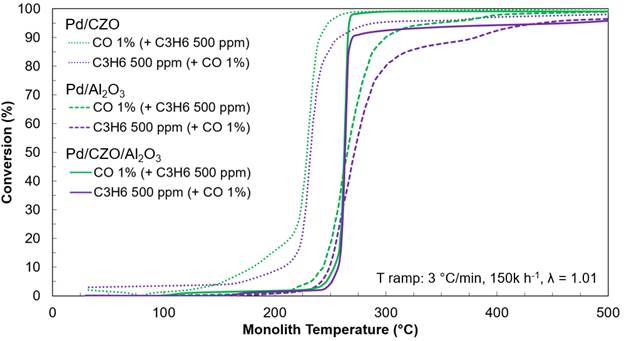 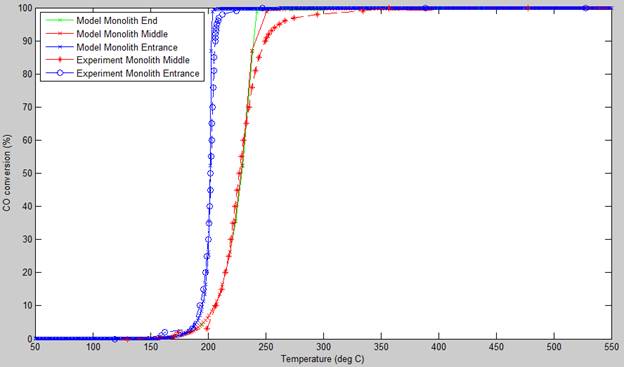