Nitrogen oxides (NOx) are one of the main air pollutants present in the exhaust from diesel engines, which are popular for vehicle transportation due to their efficiency and durability [1]. However, NOx emission control is a challenge in these "lean-burn" engines [2]. As is well known, the selective catalytic reduction (SCR) of NOx with NH3 is a reaction between the NO, NO2, and O2 oxidants and the NH3 reductant to form N2 and H2O. Copper-exchanged small-pore micro-crystalline materials with the chabazite structure (Cu/CHA), such as Cu-SSZ-13, display excellent catalytic activity and hydrothermal stability in SCR of NOx, as has been shown in a number of recent studies [3, 4]. Although Cu-SSZ-13 have been commercialized as diesel after-treatment catalysts, the fundamental chemical and physical properties need to be characterized in order to aid in the design of new and better catalysts [5].

X-ray absorption spectroscopy (XAS) is a versatile tool to determine the oxidation state and the local structure of Cu in Cu/CHA. Cu K-edge X-ray absorption near edge spectra (XANES) has been widely used to study the properties of Cu-SSZ-13 because of its high activity and selectivity in the NH3 SCR of NOx. It is demonstrated that XANES is extremely sensitive to the local structure of Cu ions [6, 7]. However, the exact relationship between XANES features and local structure is still unclear. In this work, we examine how the geometry of a Cu+ ion with a linear configuration and Cu2+ ion with a square planar configuration in Cu-SSZ-13 correlate with the XANES features. When water and ammonia binds to a Cu+ ion with a linear configuration, a strong intensity peak around 8983 eV in Cu K-edge XANES appears. When two ammonia molecules bind at a Cu+ ion, it is also found that the intensity of the peak around 8983 eV decreases as one decreases the N-Cu-N bond angle from 180 to 100 degree (see Figure 1). By analyzing the corresponding PDOS, it is found that the splitting of 4p state correlates with the N-Cu-N bond angle and the corresponding decrease in the K-edge intensity. Concerning the case of Cu2+ ions with a square planar configuration bounded to four ammonia molecules, it is found that there are two feature peaks around 8986 and 8993 eV in their Cu K-edge XANES. By studying this simple model, we find that changing the N-Cu-N angle between one of the bonded NH3 and the Cu-centered ion from 180 to 100 degree results in a decrease in the intensity of both peaks around 8986 and 8993 eV. It is also found that the broken of square planar configuration results in the delocalization of 4p state.

An important limitation of XANES is that it is difficult to distinguish the nitrogen and oxygen atoms in the proximity of the metal center. X-ray emission spectroscopy (XES) could overcome this limitation. It is reported that the Kbeta'' peak in XES of a Cu-SSZ-13 sample presents a blue shift with the formation of Cu-N bond [8]. This can be understood by the fact that the Kbeta'' peak originates from the ligand 2s to a metal 1s crossover transition and the nitrogen 2s level lies higher in energy than the one for oxygen. By comparing the XES results between H2O and NH3 adsorbed on Cu-SSZ-13, it is found that the Kbeta'' peak of Cu-O bond appears at lower energy than that of Cu-N bond. In addition, the coordination number of Cu ions significantly affects on the energy difference between the position of the Kbeta'' peak. By performing a density of states (DOS) analysis, these results can be understood at the electronic level. Overall, our careful elucidation of the spectroscopic properties of Cu ions in Cu-SSZ-13 via theoretical techniques can assist us in interpreting the XANES experimental results so as to gain a deeper understanding of the SCR of NOx with NH3 throughout its catalytic cycle. 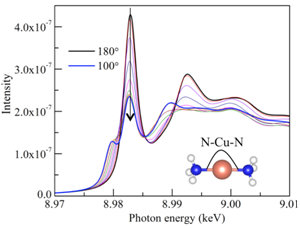 Figure 1. Variation of Cu K-edge XANES for 2 NH3 adsorbed on Cu+-SSZ-13 with changing the angle of N-Cu-N (as shown insert in the right bottom) from 180 degree (black line) to 100 degree (blue line) with decrement of 10 degree.