Equilibrium interactions between particles in aqueous suspensions are limited to distances less than 1 µm. Here, we describe a versatile concept to design and engineer non-equilibrium interactions whose magnitude and direction depends on the surface chemistry of the suspended particles, and whose range may extend over hundreds of microns and last thousands of seconds. The mechanism described here relies on diffusiophoresis, in which suspended particles migrate in response to gradients in solution. Three ingredients are involved: a soluto-inertial ÔbeaconÕ designed to emit a steady flux of solute over long time scales; suspended particles that migrate in response to the solute flux, and the solute itself, which mediates the interaction. We demonstrate soluto-inertial interactions that extend for nearly half a millimeter, last for tens of minutes, and which are attractive or repulsive, depending on the surface chemistry of the suspended particles. Experiments agree quantitatively with scaling arguments and numerical computations, confirming the basic phenomenon, revealing design strategies, and suggesting a broad set of new possibilities for the manipulation and control of suspended particles. 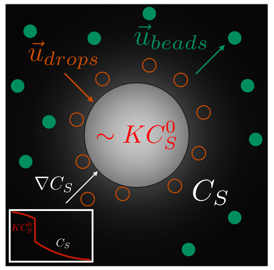 Figure 1: Long-range soluto-inertial interactions. A soluto-inertial beacon (gray), initially loaded with a high solute concentration, is placed in a solute- free suspension. A solute out-flux is established during equilibration, driving nearby suspended particles into diffusiophoretic migration. The magnitude and direction of migration depends on interactions between the particle surface and the solute, depicted here by particles of different surface chemistries (orange and green) that migrate either up or down the solute gradient. Inset: schematic radial profile of solute concentration inside and outside of the beacon.