Intensification of solvent extraction processes leads to reduction of costs and solvent inventories, and improves the safety and sustainability of the operations in a wide range of industries. The use of small channels as contactors improves mixing and increases the surface area available for mass transfer as compared to conventional contactors. Extractions performed in millimetric channels operating in slug flow regime, show high volumetric mass transfer coefficients (kLa) and extraction efficiencies (%E) [1,2]. These studies have shown the links between hydrodynamic characteristics like plug lengths (and thus interfacial area) or internal circulation patterns in each phase with the mass transfer performance of the contactors.

The throughput achieved in one channel, however, is small compared to industrial rates. To increase throughput in small scale devices, scale out (instead of scale up) is used; this can however, require a prohibitively large number of small channels. To overcome this problem we followed two strategies. In the first strategy, the size of the channels is increased enough to allow large throughputs while still preserving the benefits of small scale operation, such as laminar flows and well defined, regular patterns. Scale out to desired throughputs would then involve a smaller number of channels. In the second one, the velocities of the two liquid streams are increased when they are brought into contact (impinging-jets mixer). It has been found that when jets of the same phase collide very high energy dissipation rates are achieved, which can be almost two orders of magnitude higher than in conventional contactors [3]. Impinging-jet mixers have not been studied for jets of immiscible liquids, but the high energy dissipation rates are expected to produce very small drops and increased interfacial areas.

For the scale-out strategy, the main challenge is to develop manifolds which produce uniform flow distribution in the many parallel channels. The two single phases can be distributed in separate manifolds and fed into the contacting channels (split-combine), or alternatively, the two phases can be first mixed before the two-phase mixture is distributed into several channels (combine-split). Both these configurations have been studied for gas-liquid flows operating in Taylor flow regime [4, 5]. Al-Rawashdeh et al. (2012) found for the split-combine approach that the manifold was successful for only one flow rate condition [4]. For the combine-split approach good flow distribution was again achieved only at limited conditions [5]. Neither of these approaches has been tested for liquid-liquid flows.

The scale up of liquid-liquid flows in small channels was investigated in this work following both strategies. Water and kerosene were used as the immiscible liquids. Flow patterns and drop sizes were studied with high speed imaging. For the manifold studies both the split-combine and combine-split concepts were used to construct set-ups with 2 and 4 outlet channels with 1 and 2 mm internal diameter. For the design of the impinging-jet mixer (Figure 1) two different nozzles have been used (0.25 and 0.5 mm internal diameter) and two different mixing chambers (2 and 3 mm). Drop size measurements showed that interfacial area in the case of the impinging-jet mixer is increased up to 8 times compared to T-junction capillaries for the same operating conditions. In addition, it was found that smaller droplets formed with increasing energy dissipations. The goal of the current work is to identify the different flow configurations that produce small drops with narrow size distribution. 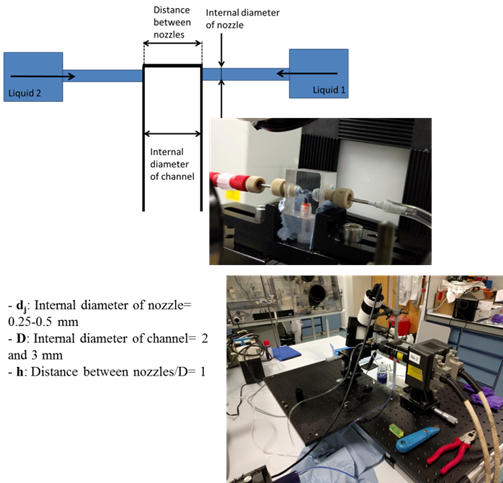 Figure 1. Schematic and photograph of the experimental setup of the confined impinging-jet mixer.