Methanol is a common feedstock in the production of many industrial products and is the main reactant in the production of dimethyl ether (DME), which itself can be transformed into olefins and other commodity chemicals. DME is also being considered as a clean fuel for LPG based engines.  Methanol is usually produced in fixed bed catalytic reactors (ICI, Mitsubishi, Lurgi). The reaction is highly exothermic, leading to hot spots in the reactor and catalyst sintering in the fixed beds. This work is part of a wider study investigating the production of methanol from CO2 in bubble column reactors (employing colloidal catalysts), where heat may be better distributed throughout the reactor. To this effect two slurry bubble column reactors have been designed and commissioned (1m and 2m tall with a volume of 1L and 2L, respectively) to investigate CO2 hydrogenation in such systems. The focus of this work is to develop a calibrated model that accounts for the residence time distribution of gas in the reactor and allows mass transfer coefficients as well as Henry’s constants to be determined.

The reactor system (Figure 1) is operated in semi-batch mode, whereby reactant gases (CO2 and hydrogen) and product vapour (methanol and water) interact with a colloidal catalyst suspended in an inert solvent (squalane). A gas circulation loop recycles permanent (reactant) gases whereas product is condensed and collected. The slurry bubble column reactors can be operated up to 300°C and 100bar.

Figure 2 shows the exit tracer signal of an Argon pulse from the 1L reactor system. It was found that the residence time distribution is a strong function of the carrier flow rate. We postulate that recirculation currents within the solvent become appreciable above 200mL/min. At 400mL/min the distribution is almost bimodal, suggesting that appreciable amounts of gas are entrained in the liquid. Above 500mL/min flooding occurs and solvent is carried out of the column. A model capturing these observations and allowing for the subsequent determination of mass transfer coefficients and Henry’s constants of reactive gases into a number solvents is proposed. 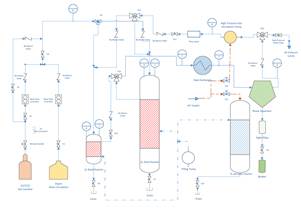 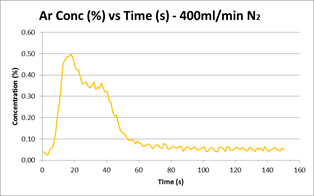