Mechanically stirred vessels are widely used in a broad range of chemical process industries, and their purpose varies from mixing different materials, generating solids suspensions or enhancing heat and mass transfer. The geometric configuration of both impeller and tank together with the fluid physical properties, in particular viscosity, dramatically affect the fluid dynamics of the system. For Newtonian fluids general guidelines for the most appropriate geometric configuration in different applications are available in the literature. Conversely, even if non-Newtonian fluids are employed in many industrial processes, less information is available. These fluids are complicated to mix, and often sophisticated impeller designs are required. This is the case in the oral health industry, where highly viscous non-Newtonian fluids are used in the production of non-aqueous specialized oral care products, such us non-aqueous toothpastes.

Computational fluid dynamics (CFD) is a powerful tool that yields relevant process information and permits assessing the performance of stirred vessels. The software relies on basic balance equations of fluid mechanics, such as mass, linear momentum and energy balance equations, solved on discretized fluid domains defined by the user. CFD can be used, among others, to evaluate the mixing performance of stirred tanks, which is particularly useful when dealing with non-Newtonian fluids. The objective of this research is twofold: we first aim to characterise the rheology of the two-fluid mixture of interest (glycerol and a polymer made of polyethylene glycol and Carbomer) and to derive a constitutive equation to model it. The second objective is to use this rheological information to numerically simulate the fluid dynamic behaviour of the mixture in a stirred vessel and to validate the model predictions against accurate experimental results of power consumption.

The fluids of interest in this research are glycerol and a polymer made of polyethylene glycol and Carbomer at a specific ratio. The rheology of the polymer has not been studied before. For the development of the CFD model for the mixing of these fluids we need to determine the constitutive equation that describes the viscosity of mixtures of this particular polymer with glycerol at different polymer mass fractions and shear rates at different temperatures.

We studied the polymer mass fraction in intervals of 10%, from 0 to 100%. Each mixture was studied at thirteen equally-spaced temperatures, between 25 ºC and 85 ºC, according to the operating conditions of the industrial mixing process. For each polymer concentration and temperature considered, the viscosity of the mixture was evaluated at fifteen equidistant points in a logarithmic scale of shear rate in the range of 1 s-1 to 250 s-1, where the experimental results were repeatable. Indicative results are shown in Figure 1, which correspond to low and high values of polymer mass fraction (40% and 100%) and to low and high values of temperature (40ºC and 60ºC).  We used the rheological data to determine the coefficients of a power law model for each experimental case (Eq. 1).

This same approach was followed for all conditions studied, and a total of 143 values for each coefficient, K and n, were determined, which correspond to the 11 polymer mass fractions and 13 temperatures evaluated. The coefficients can be calculated at any value of polymer mass fraction from 0 to 1 and temperatures from 25 to 85 ºC through linear interpolation. Experimental measurements of power consumption

Power requirements for the mixing of the polymer/glycerol solutions were measured experimentally at certain concentrations and temperatures in order to validate the CFD model of the stirred tank with the viscosity function developed from the rheological measurements. The measurements were carried out in a stirred tank fitted with a standard Rushton impeller. The height of the fluid H was set equal to the tank diameter. The impeller has a diameter D=1/3H; it was located at the centre of the tank, and was driven by a variable-speed motor that could operate in the range of 50 – 2000 rpm. To measure power consumption we used a combination of an air bearing and a load cell (Figure 2). 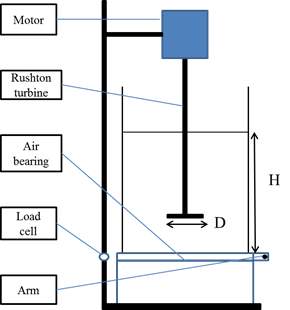 Figure 2. Schematics of the experimental setup

The two main approaches for modelling stirred tanks are the Reference Frame (RF) and the Sliding Mesh (SM). The main advantage of RF is the speed of convergence, but it can only be used for steady-state flows. In contrast, SM provides a time dependent solution, but the computational effort and time required to perform SM simulations are quite significant. RF is therefore the preferred approach when its predictions are the same as those given by the SM approach. To decide what approach to use, we tested both of them by modelling the mixing of glycerol at 25 ºC at 100 rpm impeller speed in the set up described above. It was found that the RF approach is applicable. The computations were carried out using a 3.50 GHz Intel® Xeon ® CPU E5-1650 v2 with 16.0 GB RAM. The fluid dynamics were modelled using ANSYS Fluent 16.1. Results and Discussion

The torque and power consumption were measured for the mixing of five non-Newtonian glycerol/polymer mixtures at six impeller speeds and two different temperatures. In Figures 3 and 4, the power curves (plot of Power number against Reynolds number) are plotted for two different cases, 100% polymer mass fraction at 40 ºC and 40% polymer mass fraction at 60 ºC. In the same Figures, the CFD predictions are also included. 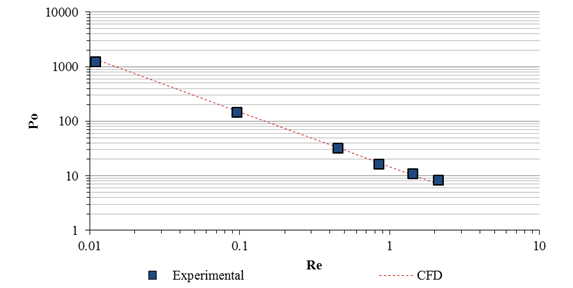 The agreement between the computational and experimental data is very good, which indicates that the CFD model can be used to predict the torque applied by a Rushton turbine using the experimental rheology model. Similar results are found for the remaining cases.

We currently study the mixing time of the two fluids both experimentally and computationally. For these studies the tank is filled with glycerol and the polymer is added at a particular location. Experimentally the concentration profiles in the tank are monitored with planar laser induced fluorescence (PLIF).

The authors would like to express their gratitude to GSK and the EPSRC for the funding to carry out this research.