Contrary to the popular belief, fossil energy consumption is not limited by its availability but is constrained by environmental considerations. Over the past decades, the world’s natural gas proven reserves have been increasing steadily, from 2592 trillion cubic feet in 1980 to 6972 trillion cubic feet in 2014 [1], and if non-conventional sources like methane hydrates or shale gas are included, this increase is even steeper. Many scenarios for the future production of energy without CO2-emissions have been investigated. The consensus seems to be directed towards renewable energy; however, a complete transition to renewable energy is not foreseeable in the near future [2]. It is thus necessary to search for bridging technologies. Among these, hydrogen presents itself as a very attractive alternative energy carrier due to the possibility of using existing natural gas infrastructure as well as for its facile integration in fuel cells and other clean energy technologies.

Hydrogen can be generated with low to zero CO2-emissions by pyrolysing hydrocarbons at high temperatures. The pyrolysis of methane can be described by the reaction:

This reaction is endothermic and becomes thermodynamically spontaneous above 820 K and kinetically feasible at temperatures around 1073 K. The reaction can be catalysed at lower temperatures, but the carbon deposition on the catalyst and the limited equilibrium conversions leading to a separation problem and recycle streams are still issues that have to be addressed. The high temperature pyrolysis remains an alternative, but is not without challenges: carbon deposition is still a major hurdle, which can lead to blockage of the reactor, and the endothermicity of the reaction necessitates the introduction of heat at higher temperatures.

Convective heat supply reactor concepts offer advantages that can help circumvent both problems. In this work, three concepts are presented:

The first two concepts are based upon the use of liquid molten media, such as molten metals. On the one hand, the liquid medium acts as a barrier preventing carbon deposition at the heat transfer surface, as well as a heat transfer material due to its excellent transport properties. The use of molten metal bubble columns was first proposed by Steinberg [3]. A modified version was explored by Serban et al. [4] exhibiting a relatively high conversion (57%) for low temperature operation (750°C). In this publication, carbon deposition occurred at both the reactor surface and in the sparger used to feed the methane. Currently a bubble column reactor with a fixed-bed is being investigated by the group of Prof. Abanades in the IASS in Postdam in cooperation with the Karlsruhe Institute of Technology amongst others [4]. Their results show a hydrogen yield of 30% at 1000°C with little carbon deposition on the reactor surface. However, the lack of control over the residence times in bubble columns inherently leads to a decrease in conversion. To overcome this difficulty, the use of a capillary reactor using molten metals in slug flow regime (Fig. 1) was studied at temperatures up to 1100°C [5], showing promising results, although only relatively low conversions (30% methane) have been achieved so far. 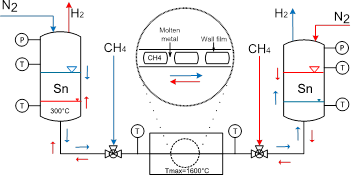 To increase conversions, working at still higher temperatures is the logical approach when the reactor length is limited. However, initial experimental results (Fig. 2) indicate increased carbon deposition, which can be explained by the increased rates of carbon formation, coupled with insufficient wetting of the heat transfer area by the molten metal as well as morphological differences in the carbon formed. To resolve this problem, two techniques can be used: the first one is to tweak the wetting properties of the molten metal, to avoid carbon deposition. A second approach would be to modify the reactor design appropriately to guarantee film formation while maintaining the advantages of slug flow operation.

Figure 2. Carbon deposition in a capillary reactor at 1300°C

In this work, the experimental results for the first approach are presented, where the wetting properties of the melt were modified using a different alloy (Ga-In-Sn) rather than just tin. For the second approach, a theoretical study on a countercurrent falling-film reactor (Fig. 3) is presented. The falling-film reactor uses a similar concept to the capillary reactor, employing the molten metal as both a heat transfer medium and to protect the heat transfer surface, thus retaining the advantages of the slug flow regime. In addition, countercurrent operation inherently prevents the occurrence of the back reaction which could potentially take place in the slug flow regime. Furthermore, the residence time of the gas although not as well-defined as for the slug flow regime, can be still considered narrow enough to assure plug flow. The mathematical modelling and the simulation results are presented together with preliminary experimental results regarding film stability. 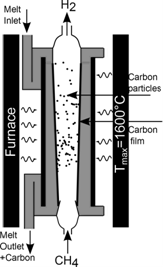 Finally, the third concept uses gas as a convective heat carrier. Previous work at our laboratory used a porous-wall reactor [6], where the carrier gas flowed through a porous wall into the reaction zone, avoiding the carbon deposition on the outer walls. However, methane diffusion through the membrane proved to be higher than anticipated, and as a result carbon deposits were still found in the outer region. To avoid this diffusion, a side-jet reactor (Fig. 4) concept was developed, where the carrier gas flows through small holes in the inner tube generating a greater gas velocity in comparison to the porous wall. This minimizes the rate of diffusion of methane into the outer zone and provides a better mixing with the methane and thus an improved heat transfer. In this work, the modelling of the side-jet reactor is presented as are the preliminary experimental results. 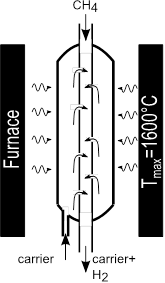