Micro-packed bed reactors are being increasingly used in multiphase catalysis due to their enhanced heat and mass transfer and well-controlled environments [1]. Understanding the prevailing hydrodynamics and mass transfer behaviour is pertinent to utilising the advantages of microreactors to their full potential. The aims of this study are to identify influences of hydrodynamics and reactor design on mass transfer, reaction rate and catalyst deactivation for the Au-Pd catalysed benzyl alcohol oxidation. The catalyst used is of particular interest due to its superior activity in catalysing alcohol oxidations to aldehydes [2], a class of reactions ubiquitous in the pharmaceutical and speciality chemicals industries.

The hydrodynamics had implications on the inter- and intra-phase mass transfer characteristics as well as the stability of the catalyst. Operating in a gas-continuous flow regime led to enhanced external mass transfer, resulting in high reaction rates with respect to the desired reaction pathway (TOF of 4500 hr-1) [3]. Two limiting cases were found: (i) gas-limited operation that occurs at low G:L (gas:liquid flow rate) and (ii) liquid-limited operation that prevails at high G:L (Figure 1). The gas-liquid mass transfer coefficient under the liquid-dominated flow regime was experimentally measured to be 23.6 s-1, a value that is two orders of magnitude higher than that commonly observed in conventional trickle bed reactors. The catalyst stability was drastically influenced by the hydrodynamics – possibly linked to the tendency of by-products to deposit on the catalyst surface at high G:L ratios, the extent of which was dependent on the degree of catalyst wetting.

Variations in reactor inlet design had implications on the observed reactant conversion through its influence on the hydrodynamics that developed downstream in the packed bed region. Superior performance (94% conversion in comparison to 80% conversion) was observed when the liquid was introduced directly into the catalytic bed, precluding the formation of gas-liquid slugs upstream, thus influencing the mass transfer within the packed bed. 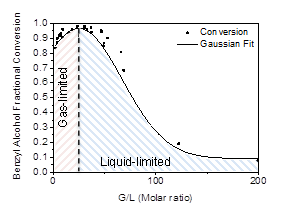