Microalgae are long been recognized as one of the most promising alternatives for biofuel production. The main advantages of microalgae with respect to other possible feedstock are the high potential productivity and the absence of competition with traditional crops for arable land and clean water. However, this potential is still theoretical and algae production on large scale is not profitable yet. Several issues need to be addressed to reach this objective, ranging from algae cultivation and harvesting as well as products extraction [1]. In order to be economically and energetically sustainable microalgae cultivation must use the solar irradiance, which is variable on daily and seasonal basis. One of the main problems of microalgae cultivation in large scale is the low conversion efficiency of the solar energy. In fact, there is a big gap between the conversion efficiency obtained in laboratory and in large scale photobioreactors.

Microalgae have developed a series of mechanisms to modify their photosynthetic apparatus in order optimize the light utilization in a natural environment, such as variation in pigment composition and/or spatial organization of the photosynthetic apparatus [2]. In particular, two main regulatory mechanisms can be identified: photoregulation, often referred as Non Photochemical Quenching (NPQ), and photoacclimation. Photoregulation involves the activation of dissipative pathways to convert part of the light energy in thermal energy in order to prevent photo-induced damage (photoinhibition) and acts in a time scale from minutes to hours. Photoacclimation is a slower process acting in time scales of days and induced a variation on the pigment content of the microalgal cells as consequence of a variation in the light conditions. However, certain properties of microalgae, which have been positively selected in wild-type species through evolution, can cause a significantly loss of productivity and are therefore detrimental to large-scale cultivation as the growing conditions in industrial plants are very different from the natural ones [3]. In this context, genetic improvements of microalgal strains can play a major role in the development of biofuels technology. However, addressing such a complex problem via trial-and-error, as is done currently, presents many drawbacks. First of all, evaluating the performances of a mutant is a difficult and time demanding task, as it requires to grow several microalgae cultures under different light conditions and each experiment may last several days.

First principles models could be an effective tool to reduce the experimental effort needed to select the best mutant among different candidates and they can also provide guidance for genetic engineering by identifying those modifications having the largest potential impact on productivity.

In this work we will show how a model developed by the authors [4] can be exploited to evaluate the performances of different mutants in fast and reliable way. The model describes the photoproduction, photoregulation and photoinhibition processes and has been calibrated against chlorophyll fluorescence and photosynthesis rate measurements of three strains of Nannochloropsis gaditana: the wild type, a mutant with reduced NPQ (mutant T3.9) and a mutant with a reduced antenna size and chlorophyll content (mutant E2). After the calibration the model has been used to evaluate the mutants performances under multiple light conditions, such as the photoperiods of different months in a typical Mediterranean country. The advantage of the proposed approach is that to calibrate the model are necessary only fast and accurate fluorescence measurements and some measurements of photosynthesis rate. In fact, as demonstrated in [4] the information contained in fluorescence experiments is sufficient to describe the dynamics of photoregulation and photoinhibition. 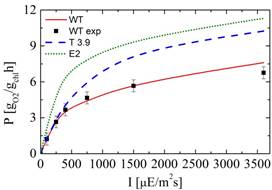 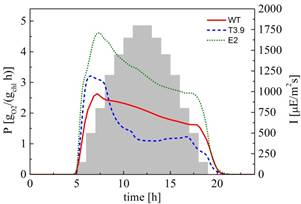 We can observe that, even if the photosynthesis rate measurements of the NPQ-less mutants are higher than the measurements of the wild type also at high light intensities, when the culture is exposed to intense light for a prolonged amount of time, the photoinhibition lead to a dramatic reduction of the photosynthesis rate. For this reason a mutant where the NPQ activity is absent may not be a good candidate for an outdoor cultivation in the Mediterranean area and other type of mutants should be investigated. On the other hand, the mutant E2 is more promising as the model predictions show an higher photosynthesis rate both in laboratory measurements conditions and for the July photoperiod. Moreover, if a dense culture is considered the antenna-less mutant will lead to a more uniform light distribution, which will increase the gap between the wild type and the mutant.

Future efforts will be devoted to validate the model predictions for different photoperiods and to include the light attenuation and mixing effect in the modelling framework. This will allow us to investigate the mutants performances under more realistic conditions representing a real photobioreactor conditions.

[3] Formighieri, C., Franck, F., and Bassi, R. (2012) Regulation of the pigment optical density of an algal cell: filling the gap between photosynthetic productivity in the laboratory and in mass culture. J. Biotechnol. 162, 115–23

Extended Abstract: File Not Uploaded
See more of this Session: Advances in Algae Based Biorefineries: Algae Biomass Cultivation, Harvesting, and Characterization
See more of this Group/Topical: 2016 International Congress on Energy