Integrated membrane reactors for the production of pure hydrogen at low temperatures are currently attracting much interest. Traditionally, hydrogen production is carried out in a steam reforming reactor, followed by a separator to obtain high purity hydrogen. The system studied here consists of an annular reactor, packed with a catalyst, in which the methane steam reforming reaction takes place. A hydrogen permeable membrane is supported on the inner wall of the reactor, allowing the selective removal of hydrogen as it is being produced through the steam reforming reaction (Figure 1). The reactor is considered to be isothermal and fed with a mixture having a composition determined by equilibrium conditions at the temperature at which the reactor is working. Through this approach it is possible to determine how the presence of a the reaction enhances the amount of pure hydrogen obtainable compared to a simple separator. The system’s performance has been evaluated in terms of hydrogen yield, evaluated as the ratio between the amount of hydrogen permeating across the membrane and the amount of hydrogen fed to the reactor. Based on this definition, the yield is not upper bound by unity as hydrogen produced from the conversion of methane also contributes to the total amount of permeate collected.

We developed a model of a membrane reactor for low temperature methane steam reforming, which was solved numerically using COMSOL Multiphysics. This model has allowed an identification of the main phenomena influencing the behavior of the system and their relative importance in different operating conditions. In most cases, the reaction rate does not limit the performance of the integrated reactor, even when working at low temperatures, because of the highly efficient catalysts that have been developed in the past years. It was found that, when the reaction is considered to be infinitely fast compared to transport, as is often the case, the system may be studied through a pure transport model. To describe this scenario, a simplified model was developed, allowing an accurate evaluation of hydrogen permeate flow rate and yield over a wide range of operating parameters, with very low computational cost. According to this model, two limit-case conditions may be identified: one in which the hydrogen yield is limited by membrane permeance, and one in which it is limited by transport within the packed bed. The regime actually governing the behavior of the system having a fixed geometry depends on membrane permeability, dispersion, and pressure.
The presence of a region of the reactor, close to the wall on which the membrane is supported, in correspondence of which the system is not capable of reaching equilibrium, was noticed (Figure 2). The extent of this region, which we will refer to as a reaction boundary layer, is the result of a competition between the steam reforming reaction, which tends to bring the system towards equilibrium, and hydrogen transport, which moves the system away from equilibrium conditions as hydrogen permeates across the membrane. 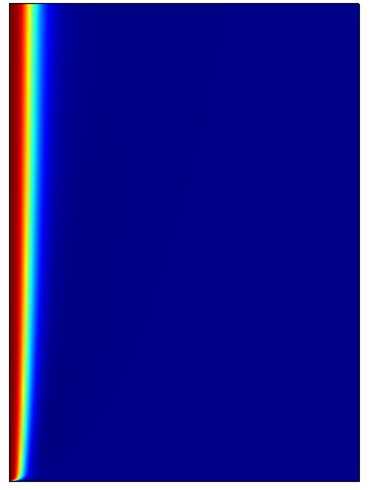 The thickness of this reaction boundary layer therefore depends on the operating conditions and on reactor geometry. The latter may be defined in terms of the ratios between the length of the reactor and its inner radius, L ⁄ R1, and the ratio between the outer and inner radii, R2 ⁄ R1. The effects of the main operating parameters on the thickness of the reaction boundary layer has been studied, along with the influence of the ratio R2 ⁄ R1.This procedure has allowed an optimization of reactor design, considering the membrane as the main cost component and working with a fixed feed flow rate.