The proven reserves of natural gas are rapidly increasing.1 Currently, it is a highly underutilized hydrocarbon source for chemicals and liquid fuels synthesis, except for steam reforming.2 One possible route is the direct conversion of methane, the main component of natural gas, to Ethane (C2H6) and Ethylene (C2H4) via oxidative coupling (Eq. 1).

Oxidative coupling of methane (OCM) has received much attention since the fundamental work of Hinsen et al.3 and Keller et al.4 This is because the prospect of direct conversion of methane to C2 molecules is highly attractive, being a vital building block in the industry with an expected increase demand. Moreover, OCM is an exothermic reaction and therefore not limited by thermodynamics.

Since 1981, hundreds of materials have been tested as catalysts.5,6 However, until now only a few catalysts have shown the potential for being economically viable for incorporation in a large scale process. The main challenge for the catalyst is the need to be highly selective for C2 products, overcoming total oxidation of CH4, which is by far the thermodynamically favored reaction route under these conditions (Eq. 2).

Mn-Na2WO4/SiO2 catalyst has been found to have remarkable stability at the required reaction conditions.7 Moreover, this catalyst obtained performance of ~33% CH4 conversion at 80% C2 selectivity giving a C2 yield of ~25%.8 However, the performance needs to be improved in order to achieve above 30% yield, the indicated threshold for practical applications.9

Many variations in the composition of the metals based on this catalyst platform have been tested in an effort to understand structure-function relationship.10-14 What is known suggests a strong synergetic effect for all three components (Na, Mn, W) on silica, where the absence of either one of them leads to inferior catalytic performance.8 For example, sodium induces the transition of amorphous silica to α-cristobalite. This is considered to be crucial for obtaining above mentioned catalytic performance, despite the dramatic 2 orders of magnitude loss in surface area. This phase transition is thought to improve the dispersion of the active site, however, the dispersion of which of the components or both remains an open question.

In this study we investigate the fundamental aspects of active site dispersion for the Mn/Na/W based catalyst, while avoiding the phase transition of silica. This is done using the post-synthetic modification of zeolites (i.e. dealumination) to form open T sites, in which the active metals can be atomically dispersed regardless of phase transition.15-18 Furthermore, the use of zeolites supports provides high surface area, a crystalline structure and high thermal stability. As control, we use amorphous silica-alumina to parallel the various Si/Al ratios used as zeolites.

Preliminary results indicate that contrary to native zeolite, dealuminated zeolite undergoes phase transition to 𝛼-cristoballite, upon impregnation with Na2WO4 and calcination at 850ᵒC, analogous to silica supported catalyst. This is accompanied by a dramatic loss in surface area from ~680 m2/g to ~2.5 m2/g. Alumina is found to preserve its surface area and crystalline structure after the same impregnation and calcination progress. Amorphous silica-alumina is found to keeps its amorphous structure at low Si/Al ratios, while it transforms to 𝛼-cristoballite at high Si/Al ratios.  Manganese atoms have been post-synthetically dispersed in the open T sites following the dealumination process. The Mn-incorporated zeolite was characterized by FTIR, XRD, XPS, UV-vis, Chemisorption and Physisorption. Dispersion of tungsten and catalytic evaluation of the different catalysts in a tubular fixed-bed reactor are in progress. 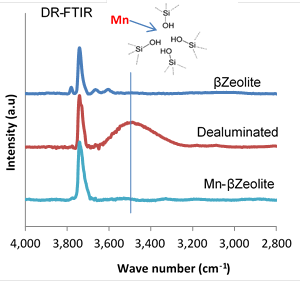 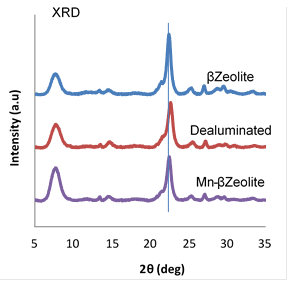 5          Maitra, A. M. Critical performance evaluation of catalysts and mechanistic implications for oxidative coupling of methane. Applied Catalysis A: General 104, 11-59 (1993).