Supercritical oxygen, a cryogenic fluid, is widely used as an oxidizer in jet propulsion systems. Understanding and characterizing the supercritical state is therefore of paramount importance in providing physical insights into processes such as cryogenic jet break-up, seen in combustion chambers of rockets, and jets. Recently, a ‘pseudo-boiling’ phenomenon was described for trancritical injection processes, prompting the discussion on a through characterization of the supercritical state of oxygen.

It is well known from existing literature that the locus of the maxima of thermodynamic response functions converge to a single line, referred to as ‘The Widom line’, on approaching the critical point, for a number of substances such as argon, water, nitrogen and others. In this study, we identify the Widom line for oxygen from atomistic molecular dynamics simulations of supercritical oxygen and compare them with experimental data of thermodynamic response functions. Additionally, we also analyze the crossover in transport properties from liquid-like to gas-like behavior with increasing temperature, which appears to coincide with the Widom line. In addition to the transition in shear viscosity and translational diffusion coefficient, we also determine the crossover in the rotational diffusion constant by analyzing the behavior of the rotational auto-correlation function of supercritical oxygen, which shows a marked change from diffusion dominated hindered rotation to a free rotation dominated state with increasing temperature. Finally, we identify the structural crossover for supercritical oxygen across the Widom line, by analyzing the pair correlation function and the structure factor. Our results indicate that in addition to the thermodynamic response functions, transport properties and structural properties show a marked change in the vicinity of the critical point, and that supercritical oxygen is far more complex than originally perceived. 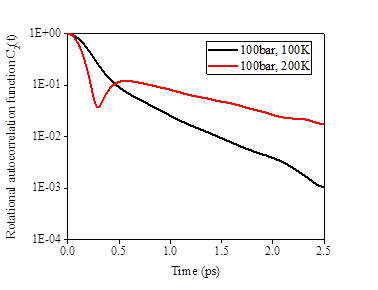