In the development of heavy oil upgrading technologies, such as slurry hydroconversion, the kinetic model plays an important role together with the hydrodynamic and mass transfer models, Jansen et al. (2014a). However, kinetic modeling of heavy oil hydroconversion is a complex task. Hydroconversion reactions described in the literature have various levels of detail, but a common factor: all reactions are considered non-reversible and light products are formed from heavy products, Jansen et al (2014b). Previously, using a batch reactor, Nguyen et al. (2013) proposed a kinetic model for atmospheric residue hydroconversion (see Fig. 1) wherein residue consumption rate depends on residue and dissolved hydrogen concentrations. In the present work, we improve Nguyen’s kinetic model by introducing a HDS reaction and modeling the outlet gas dynamic in a semi-batch reactor. Kinetic parameters and the mass transfer coefficient (kLa) were re-estimated using a nonlinear least-squares regression on the product yields and the outlet gas dynamic. Moreover, we explain the difference between the values of kinetic parameters obtained in batch and semi-batch reactors by a free radical kinetic model taking into account coke formation and we compare also these two reactors in terms of hydrogen transfer.

The properties of the atmospheric residue feed used for our hydroconversion experiments have already been reported by Nguyen et al (2013). Hydroconversion was performed in the presence of a Mo octoate precursor (supplied by Shepherd Chemical Co.). Experiments were conducted in a semi-batch pilot equipped with an autoclave PARR (250 cm3), a condenser and a cold separator (see Fig. 2). For all hydroconversion experiments, the catalyst concentration (600 ppm Mo), stirring rate (900 rpm), gas/liquid ratio (60/40, about 100 g of feed), heating ramp (3°C/min), pressure (15MPa) and H2 inlet flow (50 NL/h) were kept constant. Kinetic experiments were carried out at different temperatures (420, 430°C) and reaction times (0, 30, 60 and 120 min). The reaction time was measured from the instant the reaction temperature was reached, defined as time zero. The gas outlet flow was measured by Coriolis flow meter and analyzed by a micro-GC using two modules PoraPLOTU (8m x 0.32 mm ID) and OV1 (8m x 0.15mm ID). The total liquid products from each experiment were analyzed by simulated distillation (D-7169 ASTM). To study the hydrodynamic behavior of the gas phase, residence time distribution (RTD) experiments were carried out with N2 as tracer under non reacting conditions (below 300°C). 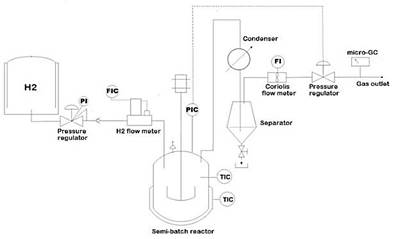 The RTD experimental results show that the reactor and separator can be modeled as a Continuous Stirred-Tank Reactor and the rest of the semi-batch pilot (condenser and tubes) as a Plug Flow Reactor. The hydrodynamic model of the gas phase was coupled to the mass balance of each unit of the semi-batch pilot. For the HDS reaction, we assumed that the organic sulphur in the feed is converted into H2S by a first order non-reversible reaction. Furthermore, the HDS reaction stoichiometry is considered assuming the HDS of 4,6-DMDBT by partial hydrogenation pathway. In Fig. 3, we can observe that the improved kinetics of Nguyen’s model coupled to the semi-batch pilot model (hydrodynamic, mass transfer and thermodynamic models) predicts the product total masses and the outlet gas dynamic to a large extent. 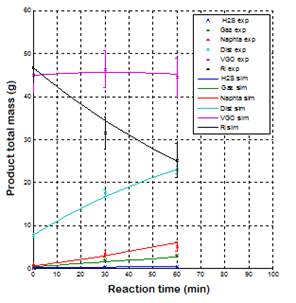 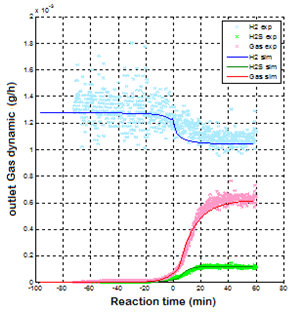 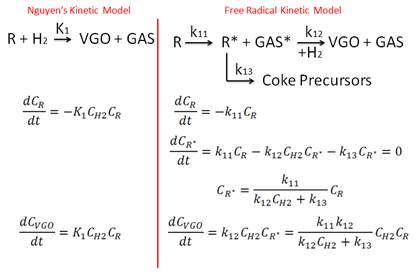 For the free radical kinetic model, we suppose that the radical species are produced and consumed at the same rate. Comparing the rate constants of both kinetic models, we obtain:

) or the coke formation rate is intrinsically slow (

The rate constants of Nguyen’s model depend on the cracking rate constants and the bulk hydrogen concentration. The cracking rates are relatively similar for the batch and semi-batch systems, since they are predominately a function of temperature (see Table 2). Thus, the rate constant of Nguyen’s model for a specific reaction system (Ki) depends mainly on the bulk hydrogen concentration in that system. This approach will be extended to the whole kinetic scheme and all the compounds in a further study.

A new set of kinetic parameters for atmospheric residue hydroconversion have been estimated. The accuracy of kinetic reaction data was improved by modeling the outlet gas dynamic. A HDS reaction was introduced into Nguyen’s kinetic model. In comparison to Nguyen’s kinetic study performed in a batch reactor, the results of the present study do not show any limitation of the transfer of hydrogen from gas to liquid in the semi-batch reactor. A high value of kLa was obtained demonstrating the high efficiency of this kind of apparatus for estimation of the chemical kinetic constants. Using a free radical kinetic model approach, we show how Nguyen’s kinetic constants depend on dissolved hydrogen concentrations that are different in the batch and semi-batch reactors.