Dynamic light scattering (DLS) can be used to measure the diffusivity of a protein within a formulation.  The dependence of molecular diffusivity (Dm,2) on protein concentration (traditionally expressed in terms of the interaction parameter, kD) is often measured to infer whether protein-protein interactions are repulsive or attractive, resulting in solutions that are colloidally stable or unstable, respectively.  In addition, the infinite dilution diffusion coefficient D0,2, calculated by extrapolating DLS data to zero protein concentration, is a parameter often used to measure changes in protein conformation.  Some problems can arise when using diffusivity measurements from DLS to quantify colloidal stability as well as conformational changes as proteins in solution are macroions whose Brownian diffusion can be perturbed by the presence of other ions.  Multiple studies have shown that when charged proteins undergo mutual diffusion with small, mobile counter-ions such as Cl-, charge separation is prevented because diffusion-induced local electric fields slow the motions of the small counter-ions and speed those of the protein macroions.  Thus, salt concentration gradients with tunable amplitude can strongly amplify particle migrations not representative of true colloidal forces between proteins.  In this study, we hypothesize that electrostatic effects, unrelated to intermolecular forces can impact protein diffusion, complicating the interpretation of both protein colloidal stability as well as protein conformation from DLS data.

In addition, kD can be used to measure colloidal stability at high protein concentration, a useful tool as many protein-based pharmaceuticals are prepared in highly concentrated (100-200 mg mL-1) solutions.  We postulate that at high protein concentration, electrostatic effects as well as other protein-protein interactions are small and that excluded volume effects account for the majority of kD which are not representative of colloidal forces between proteins.

The dependence of protein diffusion on electrolyte concentrations and local electric potential gradients is studied using Maxwell-Stefan equations to predict the effects of electrolytes on protein mutual diffusion coefficients.  These predictions are then compared to experimental DLS results obtained using a DynaProTM Dynamic Light Scattering Instrument from Wyatt Technology (Goleta, CA).  The two model proteins used in this study are lysozyme and a mAb from 2 mM to 90 mM KCl buffer at pH 6.0.  The system contains three ionic and one neutral species, which are proteins, counter-ions, co-ions, and the neutral solvent species, water.  Water dissociation is neglected, whereas KCl completely dissociates into K+ and Cl‑.  Inputs to the model are species mole fraction, net charge, and intrinsic diffusion coefficient.  Since proteins are dialyzed at 25 mg mL-1 into low ionic strength buffers, Donnan effects are non-negligible and the concentration of K+ and Cl- ions present on the retentate side of the membrane after dialysis are calculated using Donnan equations.  Far-UV CD is then used to look at protein conformation as a function of ionic strength using a Chirascan-plus spectrometer (Applied Photophysics, UK).  A theoretical hard sphere (HS) model is made to determine the effect of excluded volume on kD (kDHS) as a function of protein concentration.  To estimate this contribution, we use Mooney’s equation of viscosity to determine the dependence of protein volume fraction on solution viscosity and use Stokes-Einstein equation to relate viscosity to protein diffusion.

In this study, we demonstrate that the parameter kD is impacted by the presence of co-solute as well as high volume fraction of proteins so careful interpretation of kD is needed if it is used to understand weak protein-protein interactions and colloidal stability of protein formulations. 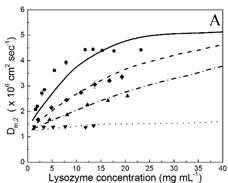 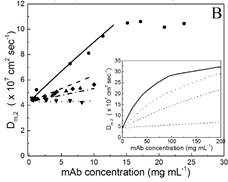