Adsorption technology is one of the leading options currently being explored for carbon dioxide capture and concentration (CCC) from flue gas. Among the adsorption based processes, Vacuum Swing Adsorption (VSA) on 13X Zeolite has been widely studied for CCC from (synthetic) dry flue gas containing 10-15% CO2 in balance nitrogen. However, real flue gas from any source will always contain moisture. Competition between H2O and CO2 for adsorption in 13X Zeolite has a large impact on the VSA process performance, leading to considerations for the use of a guard bed adsorbent such as silica gel or alternative processes to dehydrate the feed gas to a suitable extent. Sacrificing an initial water penetration depth of 13X Zeolite in a single stage VSA process column was recently considered using approximate equilibrium data in VSA optimization studies. Despite the sensitivity of CO2 capture performance of 13X Zeolite to moisture, wet flue gas on 13X has been addressed only in a few studies using extrapolation of limited available equilibrium data for CO2/H2O mixtures. An objective techno-economic evaluation of VSA processes with new materials in varying humidity levels requires a validated simulation model. Process simulation model validation requires availability of sufficient adsorbent material. A process model using a dual-adsorbent VSA process with adsorbents Silica Gel - 13X Zeolite for CCC from wet flue gas can be validated to establish a cost baseline for assessing new materials and process developments. An essential pre-requisite for that is availability of detailed equilibrium data for CO2/N2/H2O mixtures on 13X Zeolite, which was addressed in this study.

Grand Canonical Monte Carlo molecular simulations for the adsorption of CO2, N2 and H2O and associated gas mixtures on 13X Zeolite were performed. The 25Angstrom unit cell of 13X Zeolite adopted contained 83 mobile Na+ cations, corresponding to a Si/Al ratio of 1.31. Unlike H2O, CO2 and N2 were blocked from entering smaller beta cages using 8 virtual 4Angstrom radius blocking spheres per unit cell, which is illustrated in Figure 1 for N2. Intermolecular interactions between fixed charge models of adsorbate and adsorbent consisted of 12-6 Lennard-Jones and Coulombic potentials. The isotherms of pure components at 298, 323, and 348 K in the range 0 to 1 atm for CO2 and N2, and from 0 to PsatH2O(T) for H2O were initially simulated and compared to experimental data. Multicomponent adsorption was subsequently investigated at these temperatures and over the full range of compositions to study the influence of water vapour on CO2 capture equilibrium. This study provides simulated isotherms for comparison with experimental adsorption measurements by both thermogravimetric analysis and dynamic column breakthrough approaches. A mathematical adsorption isotherm model, which characterizes the adsorption of wet flue gas mixtures on 13X Zeolite, is presented to facilitate accurate scale-up of VSA processes for the capture of CO2 from real flue gas. 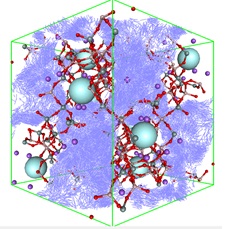