Conventional molecular separation processes such as evaporation and distillation exert substantial energy demands due to the latent heat of vaporization of liquids. Membrane technology has lower energy consumption than conventional separation processes, requiring only one-tenth of the energy to process an equivalent volume of liquid. In spite of this advantage, membranes have yet to make a significant impact in industrial organic solvent based systems, due to unresolved issues including their stability over time. Most commercially available nanofiltration and reverse osmosis membranes are either integrally skinned asymmetric (ISA) membranes, or thin film composite (TFC) membranes. Both types are made from glassy polymeric materials which age over time leading to adverse changes in membrane performance; many OSN membranes display more than 30 % permeance decline over the first few days of operation.

This ageing phenomenon is caused by re-arrangement of the polymer chains in the membranes from the non-equilibrium excess state created during the membrane formation process, towards a stabilized equilibrium state, in a time-dependent manner via structural relaxation as represented in Figure 1. Usually, ageing is manifested through a gradual decrease in membrane volume (densification), which leads to increased brittleness, decreased permeability, decreased enthalpy, and alterations in other properties. For example, the permeance of polyimide ISA Organic Solvent Nanofiltration (OSN) membranes created by phase inversion decreases from around 1-2 L m-2 h-1 bar-1 to zero after annealing at 100 °C-200 °C. This is consistent with the negligible intrinsic solvent permeance of solvent-cast polyimide films, in which polymer chains reach their highest density.

Organic solvent nanofiltration membranes have been prepared from poly(ether-ether-ketone) (PEEK) by phase inversion. Remarkably, these membranes undergo negligible ageing, even under extreme conditions of high temperature air annealing, and high temperature solute filtration with agressive solvents. This negligible ageing of PEEK membranes is contrasted with substantial ageing of crosslinked polybenzimidazole (PBI) and polyimide (PI) membranes. After air annealing at 120 °C, PBI and PI membranes become brittle and lose all permeance, whereas PEEK membranes remain flexible and retain a constant permeance of ~ 0.2 L.h-1.m-2.bar-1 for tetrahydrofuran (THF). The structural change in PBI and PI membranes is attributed to polymer transition from a non-equilibrium glassy state towards an equilibrium state at which chain packing precludes permeation of solvent. In contrast, fabrication of PEEK membranes results in polymer in a quasi-equilibrium glassy state with intrinsic permeance, which is not adversely affected by accelerated-ageing environments. High temperature filtrations in DMF up to 140 °C for the three polymeric membranes showed PEEK performance to be stable and consistent with negligible ageing, whereas PBI and PI rapidly loose stability. 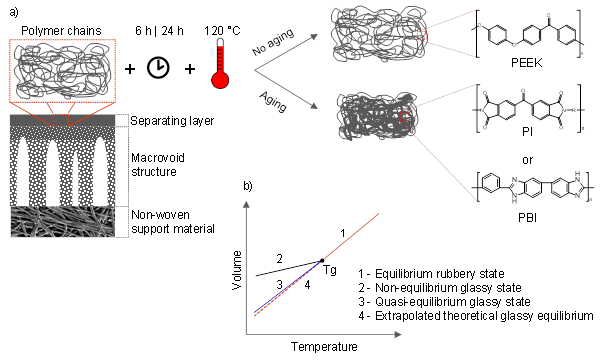 Figure  SEQ Figure \* ARABIC 1 – a) Schematic of the effect of time and temperature on the polymer chains of ISA membranes. PEEK polymer chains show no signs of ageing densification, in contrast to PI and PBI which undergo ageing. b) Qualitative volume vs. temperature diagram for a glass-forming polymer depicting the equilibrium rubbery (1) and equilibrium glassy (4) states as well as the quasi (3) and non-equilibrium glassy (2) states.