Li ion batteries (LIBs) have been the leading technology in the portable electronics market since their discovery by Sony in the 1990s. Commercially, their setup is constituted by a graphite anode, a lithium metal oxide cathode and LiPF6 dissolved in a mixture of carbonates as electrolyte, characterized by a maximum energy specific density 150 Wh/Kg [1]. However, the needs of newer and cleaner forms of energy is pushing lithium ion batteries towards higher scale applications, such as the electric grid or automotive, requiring the energy and power density to be at least doubled in the near future.

Materials advances at both sides of the cell have been actively investigated for several years. The cathodic side of the cell presents very few choices of materials that are suitable to be used in LIBs (LiCoO2, LiMnO2, LiFeO4), all with a theoretical capacity lower than 300 mAh/g, and even lower practically achievable capacity.

At the anode, there is a much wider choice of active materials. Silicon has been one of the most widely investigated options in recent years because of its very high theoretical capacity (>3000 mAh/g) and availability. However, pure silicon materials show very rapid deep capacity fade due to the large volumetric expansion occurring during the alloying/dealloying electrochemical reaction (more than 250% of the initial volume).  To mitigate this, several materials and operational adjustments have been made and modern silicon composites are only able to achieve a capacity ca. 1000 mAh/g, only 1/3 of the theoretical capacity [2]. Moreover, reference [3] showed that, due to the cathodic limitation of the cell, there is a “capacity penalty” when the anode material capacity is too much larger than the cathode material, and the anode capacity should only be around 700 mAh/g (until new cathode materials are discovered) to fully realize improvements to the overall cell performance.

This opens up the periodic table to a wide number of available chemistries including metal oxides [4] which have been the focus of many electrochemical studies so far because of their higher capacity relative to graphite and environmental friendliness. Among the metal oxides, manganese oxides are attractive because they are inexpensive and highly available [5].  Unfortunately, to date few studies have been shown with acceptable capacity and retention have been reported, particularly under realistic operating conditions.

In this work, our team will discuss the synthesis of a novel bi-metallic Mn/Co oxide active material imbedded into a low loading multiwalled carbon nanotubes matrix, as shown in Figure 1. We will show the impact of cobalt doping on half-cell performance. Different Cobalt dopant contents (0%,5%,10%,15% and 20%) were prepared and their electrochemical performance was tested, including capacity retention (Figure 2) and rate capability up to 1600 mA/g. Lastly, Na was used as a doping as well, increasing the performance of the manganese active material, which can be tied to enhancement in the electronic conductivity. 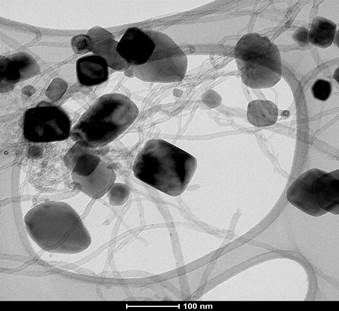 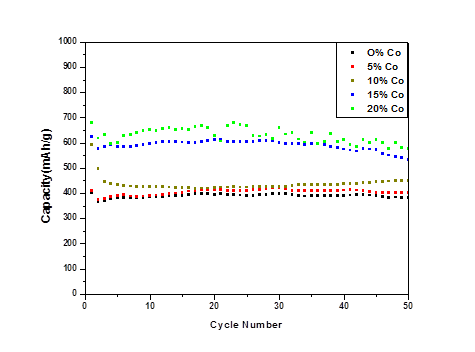