The main purpose of melt crystallization technologies is the purification of organic chemicals. These technologies are in general regarded as being alternatives to other unit operations. Crystallizations from the melt are therefore quite often restricted to limited amount of situations:

This framework definition implies that crystallization from the melt is eventually at best a complementary technique that is used to overcome issues that would not have been successfully addressed by other approaches. That being said melt crystallization is, within exception of a very limited number of widespread applications, a kind of fifth wheel of the cart in the process designer toolbox.

The melt static crystallization (MSC) is one of the embodiments of the melt technologies. Being by nature a batch process, the MSC is quite often regarded as being, despite its efficiency, applicable only to limited capacities. Quite often a limit set at 10 ktpy is considered. It is associated to applications dealing with ultrapurifications. This combination narrows a little bit more the potential scope of application as it is understood and expressed in most of the reference literature.

As a resulting feature the MSC is regarded as being irrelevant for purifications implying a large composition difference between the feedstock to be treated and the targeted final product. It is indeed considered that these cases will require using fractional crystallization approaches thus multiplying the number of crystallization stages. Such multiplication of recrystallizations would imply additional energetic expenses, lowering of the recovery yield…

Nothing could be anything but wrong. A majority of applications including the ones dealing with ultrapurification requirements or significant concentration of the compound to be purified (purity raised over 50 wt.% or more in concentration difference) are achieved with one or two MSC stages (cf. Fig 1).

Though selected examples, different purification processes organization taken from industrial plants will be presented and rated. The underlying process design strategies will be examined under the scope of energy consumption optimization between processes i) without, ii) including or iii) fully based on MSC. This comparative examination is based on the same performances in terms of capacities achieved and qualities of the feedstock and main products.

We will show how only by optimization of the energy consumption target function the technical solutions built around a MSC core process can match or even overtake the most direct and obvious approaches often favored by process designers. 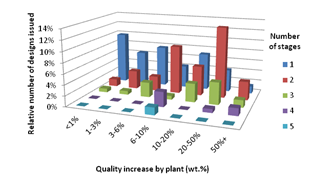