Hydrogenation and dehydrogenation reactions are critical steps in the production of a variety of important chemicals and fuels. Research described in this paper investigated the use of early transition-metal nitrides and carbides as catalysts for selective hydrogenation reactions with a focus on understanding the chemistry and reactivity of hydrogen. These materials have been reported to have properties similar to platinum-group metals [1] and are interstitial compounds, providing the potential for hydrogen population of both surface and subsurface sites. It was hypothesized that hydrogens located on versus in the metal nitrides and carbides will have differing reactivities, similar to previous reports for the reactivity of surface versus bulk hydrogen in and on Ni [2] and Pd [3]. In this work, the nitride and carbide catalysts are used in the liquid phase hydrogenation of crotonaldehyde (CH3CH=CHCHO); the selectivity for C=O and C=C hydrogenation was probed.

Our thermal desorption spectroscopic experiments indicate that early transition-metal nitrides and carbides (Mo, W, V, Nb, Ti-based) have different binding sites for hydrogen. For some of the nitrides (e.g. Mo2N, W2N, VN) two distinct sites are populated following reduction in H2 (Figure 1). Conversely, carbides were found to have predominantly one type of site. Results from thermal desorption spectroscopy and theoretical calculations suggest that the two types of sites for Mo2N arise from a surface site (low temperature site, "site A") with hydrogen bound to terminal surface N atoms and a subsurface site (high temperature site, "site B") in which hydrogen intercalates into octahedral sites. These sites were populated to directly evaluate the reactivity of each hydrogen for hydrogenation of crotonaldehyde. The relative density of hydrogen in the subsurface site (site B) correlated with the selective hydrogenation of crotonaldehyde to crotyl alcohol achieving nearly 100% selectivity. Decreasing selectivity to butanal and butanol products was observed with increasing site B density. The observed trend suggests that site B is chemoselective to C=O bond hydrogenation over hydrogenation of the C=C bond.

Ongoing work includes the extension of these analyses to new hydrogenation model substrates with aromatic C=C or -NO2 functionality.  Further, these materials are being explored for dehydrogenation of model compounds such as N-methylpyrrolidine. 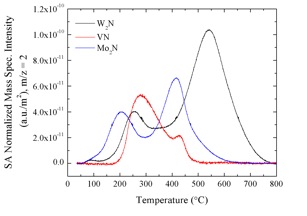