During the first three hours of Drosophila embryogenesis, two conserved signaling pathways act to pattern the dorsal-ventral (DV) axis: the Dorsal pathway and the Dpp pathway. On the ventral side of the embryo, the transcription factor Dorsal, homologous to NF-&kappa;B, triggers expression of the genes that initiate the DV pattern. Dorsal is present in a nuclear gradient, with the highest concentration at the ventral midline and a steady decay to about 40% of the embryo's circumference. The Dorsal gradient is initialized via Toll signaling on the ventral side of the embryo; Toll signaling phosphorylates the inhibitor protein Cactus (homologous to I-&kappa;B), marking it for degradation. In the absence of Cactus, Dorsal can enter the nuclei and activate expression of target genes in a concentration-dependent manner.  Dorsal also acts as a transcriptional repressor, limiting some genes to expression on the dorsal half of the embryo. One of those dorsally-expressed genes is decapentaplegic (dpp), which encodes Dpp, a bone morphogenic protein (BMP) ligand. Dpp is present in a concentration gradient, establishing DV gene patterns beyond Dorsal's reach. BMP signaling occurs when Dpp binds to the receptor Thickveins (Tkv), phosphorylating the receptor Smad protein MAD. Two phospho-MAD molecules bind to the co-Smad Medea; this heterotrimer then enters the nuclei to facilitate expression of target genes. See (A) for a schematic of BMP signaling. Together, the Dorsal gradient and BMP signaling pathway pattern the DV axis of developing Drosophila embryos.

Because robustness of tissue patterning is essential for proper embryonic development, regulatory loops must exist to ensure correct placement of target genes in the face of perturbed conditions. As an example, embryos with a half dose of Dorsal protein survive to adulthood. We have analyzed the Dorsal gradient in these heterozygotes by modeling the nuclear gradient of Dorsal as a Guassian, using the equation:

where C is the concentration of nuclear Dorsal, x is the normalized DV coordinate (0 being the ventral midline), A represents the amplitude, &sigma;, the width, and B is the basal level of Dorsal present in the nuclei at the dorsal midline. As shown in (B), we found that the Dorsal gradients in these embryos are not only shorter in amplitude as compared to wild type, as expected, but statistically wider and fundamentally different in shape, having a broader domain of peak nuclear concentration. These differences point to the existence of Dorsal gradient regulation in circumstances in which protein levels are compromised. We will present evidence that the Dpp signaling network can alter the Dorsal gradient itself, not only placement of target genes. When levels of MAD (the BMP signal transducer) were overexpressed, we found that the width of the gradient (as measured by &sigma;) expanded significantly. Furthermore, overexpression of Medea (a BMP signaling cofactor) led to the same result: an expansion of the Dorsal gradient. Therefore, feedback through the Dpp signaling network is a prime candidate for enhancing the robustness of patterning of DV gene expression, as shown in (C). These interactions between the NF-&kappa;B and BMP signaling pathways may be necessary to ensure robust gene expression in the developing Drosophila embryo. 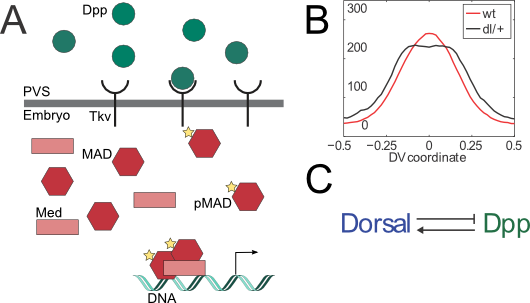