427980 Simulation of an Tablet-Coating Process on Industrial Scale

Tablet coating is a widely used unit operation in the pharmaceutical industry and is used to coat the tablet core with with one or more polymer layers that have a certain function, such as enteric coating to protect the tablet core from the acidic content of the stomach. Sometimes, the layer can contain an active pharmaceutical ingredient (API). Inter tablet coating mass variation (CoV) has to be low when coating an API onto a tablet to achieve a consistent high product quality. Therefore, a good understanding of the process is needed. Experiments focus mostly on the laboratory scale, due to costs. Thus, for large-scale optimization simulation is a promising tool.

So far, numerical simulations focused on laboratory scale equipment due to computational limitations [1], [2]. However, it is now possible to simulate millions of particles using massive parallelization capabilities of graphical processing units (GPU). This presentation demonstrates the capabilities of DEM simulations executed on GPUs using the example of an industrial tablet coating process with more than one million tablets.

This work is based on an active coating process for the production of tablets that contain two APIs: one in the core and one in the coating. Gastrointestinal therapeutic systems (GITS) were used as starting material (Bayer Pharma AG, Leverkusen, Germany). GITS are round-shaped biconvex tablets with a diameter of 9 mm and a height of 5 mm. In the modeled process, an aqueous coating solution containing an API is added. The central aim of this study was to reduce the inter tablet coating variability (CoV) by comparing different process settings, e.g., drum load, rotation velocity, number of nozzles.

Coating runs were performed in a high-performance Bohle Film Coater (BFC 400, L.B Bohle Maschinen + Verfahren GmbH, Ennigerloh, Germany), which  is a commercially available production scale coater . During the coating process the tablets are flowing in the rotating drum of the coater and are mixed axially and radially by baffles integrated into the coater design, allowing efficient mixing.

To calculate the interaction of non-spherical particles such as tablets, a glued sphere approach is used. The simulated particle consists of eight single spheres glued together. These spheres are allowed to overlap to approximate the real shape of a particle. In Figure 1, the filled drum is shown as seen during the simulation.

The material properties were determined experimentally as described in [4]. The results, e.g. the CoV, were calculated via post processing routines. CoV results received from 90 seconds simulated time were extrapolated and compared to experimental measurements. 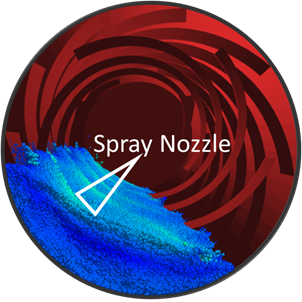 Figure 1: Filled drum coater with the position of the spray nozzles from the side. The drum is filled with 290 kg (1,028,369 tablets) and is rotated with 8 rpm

The goal of this work was to simulate the tablet coating process in an industrial scale drum coater, filled with up to 290 kg (1,028,369  tablets), using the Discrete Element Method. Simulations were done to investigate the influence different process parameters on the process outcome. The parameters studied were the drum load, ranging from 230 kg to 290 kg and the rotation velocity, ranging from 8 to 10 rpm. The spray rate and number of nozzles was varied as well and showed a significant impact on the CoV.

The CoV (Figure 2) results from the simulation match results from experiments closely. This work shows that simulation can be used to get more insight into the tablet coating process on the industrial scale based on state-of-the-art simulation tools. 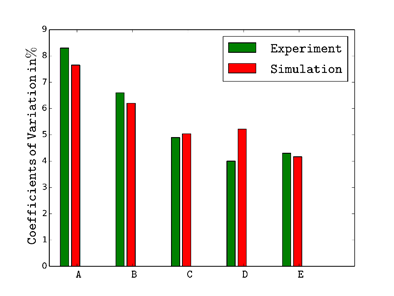