Pseudomonas putida is a metabolically versatile soil bacterium and an industrially significant strain producing a series of fine and bulk chemicals, which has resulted in growing interest to understand specific metabolic pathways (Ballerstedt et al., 2007). Among the several P. putida strains, mt-2 contains the TOL plasmid (pWW0), which specifies metabolic pathways for toluene and m-xylene degradation into Krebs cycle intermediates (Timmis, 2002). Successful activation of TOL relies mainly on the catabolic enzymes catalysing the degradation of the compound, and the promoters of genes subject to regulation by specific transcription factors (de Lorenzo and Perez-Martin, 1996). Therefore, transcriptional regulation is a key step in the biodegradation process acting as a controller regulating the appropriate metabolic cascades in response to the availability of specific substrate(s) (Diaz and Pieto, 2000).

The TOL plasmid is considered as a paradigm of global and specific gene regulation (Aranda-Olmedo et al., 2006). The transcriptional regulatory network of TOL constitutes four transcriptional units (xylR, xylS, upper and meta-operon) controlled by four promoters (Pr, Ps, Pu and Pm), respectively (Ramos et al., 1997). Entry of an effector in TOL provokes a cascade of regulatory events (Figure 1) initiated by Pr expression, which is followed by an increase in Pu expression. The latter controls the upper-operon that encodes for the enzymes transforming the inducer into an intermediate acting as environmental stimulus for XylS overexpression. XylS protein is produced constitutively by Ps and serves as the transcription factor for Pm activation. Pm controls transcription from the meta-operon, which encodes for the enzymes that catalyse the inducer further into Krebs cycle metabolites required for biomass growth.

Activation of Pu leads to the production of upper-operon enzymes catalysing the transformation of m-xylene and toluene into methyl benzoate and benzoate, respectively. The latter serves as environmental stimulus of the ortho-cleavage pathway of the chromosome activating PbenR and thus driving expression of the benR gene, which encodes for the BenR protein (Figure 1). This protein acts as transcription factor for meta-operon activation in TOL, demonstrating a cross-talk between the two pathways (Cowles et al., 2000). However, induction with m-xylene leads into a metabolic conflict (Perez-Pantoja et al., 2014) resulting in the formation of a dead-end product (Schmidt et al., 1985). Therefore, the benR gene of the chromosome is considered as an essential element of the catabolic process of toluene (Cuskey and Sprenkle, 1988). The presence of benzoate leads to a transcriptionally competent form of BenR regulating expression from PbenA and thus, transcription from the ben-operon of the ortho-cleavage pathway (Figure 1). Therefore, ben- and meta-operons are simultaneously activated by benzoate (Perez-Pantoja et al., 2014) triggering the transformation of benzoate into catechol which is further catabolised into Krebs cycle intermediates (Burlage et al., 1989).

The transcriptional kinetics of the TOL plasmid has been previously evaluated using m-xylene as the inducer of the pathway (Koutinas et al., (2010, 2011)). Furthermore, the specific transcriptional kinetics has been recently monitored upon toluene introduction in order to demonstrate the interplay between the TOL and the chromosomal ortho-cleavage pathways (Tsipa et al., 2015), suggesting interdependence of the two pathways through potential up-regulation of PbenA by the XylS protein. Nevertheless, the present study is the first to our knowledge to evaluate the transcriptional kinetics of P. putida upon simultaneous induction with m-xylene and toluene, although the specific pollutant mixture is commonly met in petrochemical waste streams. Both substrates are considered as predominant effectors of the TOL plasmid where m-xylene is strongly preferred by cells as compared to toluene (Duetz et al., 1998). At the genetic level the four promoters of TOL were stimulated first by m-xylene, and when the concentration was reduced below 0.5 mM the activity of the promoters was boosted due to toluene induction (Figure 2A, B, C, D). The expression of PbenR was maintained at a basal level and slightly decreased towards the complete depletion of both substrates (Figure 2E), while expression of PbenA was remarkably boosted only when toluene existed as the sole effector remaining in the culture (Figure 2F).

Taking into account the crucial role of promoters as controllers of biodegradation, a mechanistic approach to describe m-xylene and toluene utilization as well as biomass formation in conjunction to the response of the TOL and chromosomal regulatory networks is becoming a necessity. The performance of biodegradation in similar systems is typically monitored through Monod-type models. However, these traditional and widely used models are based on bulk measurements, ignoring the molecular interactions and gene regulation of the strain employed, resulting in limited predictive capability. Furthermore, prediction of double substrate microbial growth kinetics still remains a topic which has not been successfully realised in a wide range of conditions, constituting a major challenge in biochemical engineering. Herein, we present an experimentally validated mathematical model (using qPCR measurements), which is capable of capturing the dynamic behaviour of the key promoters in the TOL and ortho-cleavage pathways. The model's prediction is used to describe the activity of the enzymes responsible for substrates catabolism and biomass growth, followed by prediction of specific growth, biomass formation and substrates utilization rates. The application of the model in double substrate cultures exemplifies the importance of using transcriptional regulatory information for bioprocess prediction linking directly genetic and molecular mechanisms to macroscopic events. The developed model constitutes a novel mechanistic approach establishing an integrated framework for the prediction of microbial growth kinetics in environmental bioprocesses. 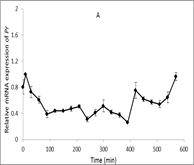 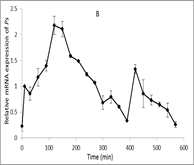 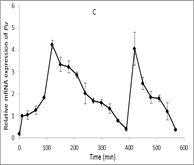 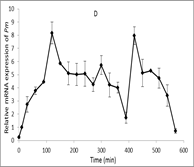 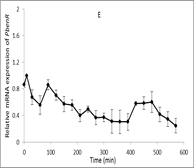 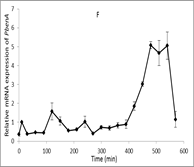 -Cuskey, S.M. and Sprenkle, A.B., 1988. Benzoate-dependent induction from the OP2 operator-promoter region of the TOL plasmid pWWO in the absence of known plasmid regulatory genes. Journal of Bacteriology, 170(8): 3742-3746.

-Tsipa, A., Koutinas, M., Pistikopoulos, E.N. and Mantalaris, A., 2015. Transcriptional kinetics of the cross-talk between the ortho-cleavage and TOL pathways of toluene biodegradation in Pseudomonas putida mt-2