Controlling stem cell renewal and differentiation is crucial to tissue engineering and regenerative medicine as a whole. Substrate stiffness and cell-cell junctional forces have been shown to be critical factors that influence proliferation, survival, and differentiation in human mesenchymal stem cells and other cell types. However, how mechanical cues regulate proliferation and self-renewal in human embryonic stem cells (hESCs) and other pluripotent cell types is poorly understood. Work from our and other laboratories supports an emerging picture in which the protein αE-catenin functions as a central mechanosensor at cell-cell junctions. Genetic and developmental evidence likewise suggest that αE-catenin acts as a potent regulator of the Hippo pathway, a central regulator of cell proliferation, by preventing nuclear translocation of the transcriptional coactivator yorkie-associated protein (YAP).

Using hESCs as a model system, we sought to determine the molecular mechanisms that connect force-dependent changes in αE-catenin conformation to downstream signal transduction that controls cell fate in pluripotent stem cells. To do so, we made use of an R551A αE-catenin mutant which mimics the force-activated conformation of αE-catenin present at cell-cell junctions. We found that in epithelial cells, R551A αE-catenin reduces cell proliferation, sequesters YAP at the junctions, and disrupts apical-basal polarity by recruiting the tight junction protein ZO-1 to the lateral cell-cell junctions. In contrast, there are no observable differences in protein localization or proliferation rates when R551A αE-catenin was expressed in hESCs. Instead, R551A αE-catenin preferentially localized to the apical junctions, indicative of its recruitment to either tight junctions or the polarity complex (Figure 1). Despite this difference, hESCs cultured on engineered polyacrylamide gels of varying stiffness still exhibit differential Hippo pathway activation and marked differences in cytoskeletal structures. These results suggests that, while hESCs are critically sensitive to mechanical inputs, they do so via a mechanism distinct from the one previously described in epithelial stem cells1. Ongoing work examines the role of αE-catenin and its conformation in controlling germ layer organization during hESC differentiation, and aims to discover the identity of the proteins responsible for mechanosensing specifically in pluripotent stem cells. 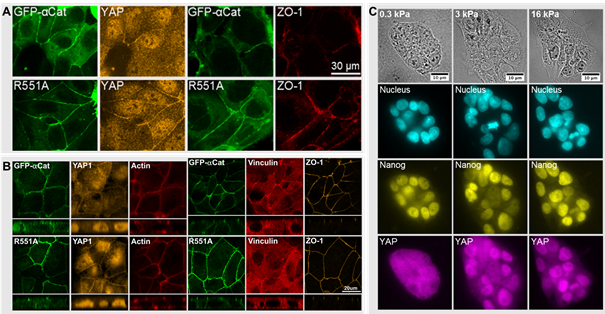 Figure 1. A Immunofluorescent staining of R2/7 epithelial cells expressing wild-type and R551A αE-catenin. B hESCs expressing wild-type and R551A αE-catenin are stained with YAP, actin, vinculin and ZO-1. Below each image is a y-z projection of a confocal stack. C hESCs cultured on polyacrylamide gels with varying stiffness. Cells are stained with YAP, pluripotency marker Nanog and nuclear dye Hoechst.