Solar thermophotovoltaic (STPV) power generators are conceptually similar to photovoltaic (PV) solar cells in which solar radiation is converted into electricity. However, STPVs have an intermediate layer between the sun and the STPV cell. This intermediate layer absorbs solar radiation and reradiates this energy towards the STPV cell. The intermediate layer, also called the radiator, allows for the radiation to be spectrally emitted and/or filtered in a way that better matches the cell's absorption characteristics. It has been shown that the theoretical maximum efficiency for a STPV power generator that radiates monochromatically at a frequency matching the absorption bandgap of the cell is 85.4 % [1]. A record STPV efficiency of 3.2% has recently been experimentally demonstrated [2]. Despite this important milestone, solar PV cells still largely outperform STPV power generators.

Many papers have been devoted to the design of selectively emitting radiators for potential use in TPV power generators (e.g., see Ref. [3]). However, these radiators are usually designed without considering radiative, electrical and thermal losses in the cell. Radiation absorbed by the cell with frequency smaller than the bandgap that does not contribute to photocurrent generation is a radiative loss. Electrical losses are caused by electron-hole pairs (EHPs) recombining before reaching the depletion region. Thermal losses are due to absorption of radiation with frequency smaller than the cell's bandgap by the free carriers and the lattice, non-radiative recombination of EHPs and thermalization of radiation with frequency larger than the bandgap. Thermal losses negatively affect STPV performance by increasing the dark current, due to an increase of the cell temperature, opposing the generated photocurrent [4].

In this work, optimum radiator emission spectra maximizing STPV power output and conversion efficiency are designed by accounting for radiative, electrical and thermal losses. This is achieved by coupling a multi-physics model combining thermal radiation, electrical and thermal transport [5] with the publicly available PIKAIA genetic algorithm [6]. The STPV power generator analyzed in this work consists of a cell made of gallium antimonide (GaSb) having an absorption bandgap of 0.723 eV at 293 K, a radiator that has a temperature of 2000 K, and a cell thermal management system characterized by a heat transfer coefficient of 600 Wm-2K-1 and a fluid temperature of 293 K. It is shown that the spectra maximizing conversion efficiency and power output greatly differ from each another.

When radiative, electrical, and thermal losses are taken into account, determining an emission spectrum maximizing STPV performance is a difficult task, since these three loss mechanisms are coupled with each other [4]. This makes an analytical solution for the optimum spectrum very difficult, if not impossible. To find this optimum spectrum, a multi-physics model combining thermal radiation, electrical and thermal transport in TPV devices, described in Ref. [5], is coupled with the genetic algorithm PIKAIA [6].

The genetic algorithm PIKAIA is an optimization tool utilizing the concept of evolution. PIKAIA determines a set of input parameters maximizing a user defined objective function. In this work, the thermal spectrum emitted by the radiator is discretized into N bands, where the emissivity is assumed to be uniform in a given band. The input parameters in PIKAIA are therefore the N values of emissivity. A given set of N emissivities is a single individual and each emissivity corresponds to a trait of the individual. The total number of sets is the population size. Two objective functions are investigated, namely STPV power output and conversion efficiency.  The objective function for each set of emissivities is computed via the TPV model, and PIKAIA ranks each set based on objective function. Parent sets are selected based on rank to create offspring sets that consist of traits from both parent sets. If an offspring set produces a higher objective function than a set in the parent generation, the set in the parent generation is replaced by the offspring set. The population is evolved in this manner over a user specified number of generations in order to determine a set of spectral emissivities that maximize the objective function.

The spectrum obtained from PIKAIA maximizing STPV power output for N = 104 spectral bands is shown in Fig. 1. The power output, cell temperature and conversion efficiency for this case are 41673 Wm-2, 393 K and 24.4%, respectively. The spectrum takes the form of a step function in which all radiation below 0.685 eV and above 1.082 eV has an emissivity of zero, while all radiation between these limits has the maximum emissivity of 1. Note that at a temperature of 393 K, the bandgap of the GaSb cell reduces to 0.685 eV, thus explaining why the low-energy cutoff is at 0.685 eV instead of 0.723 eV. 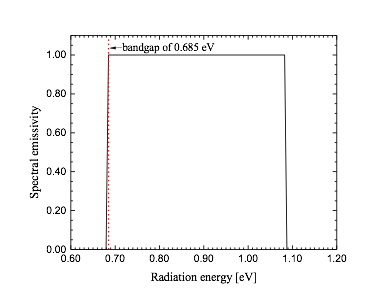 Figure 1. Thermal emission spectrum maximizing STPV power output for a radiator temperature of 2000 K, and a thermal management system having a fluid temperature and a heat transfer coefficient of 293 K and 600 Wm-2K-1, respectively.

The spectrum obtained by PIKAIA when maximizing STPV conversion efficiency results in power output, cell temperature and conversion efficiency of 9591 Wm-2, 302 K and 38.9%, respectively. Interestingly, this spectrum is not simply monochromatic at the cell's bandgap. Instead, the spectrum takes the form of a narrow step function, where radiation below 0.723 eV and above 0.761 eV has an emissivity of zero, while radiation between these limits has the maximum emissivity of 1. 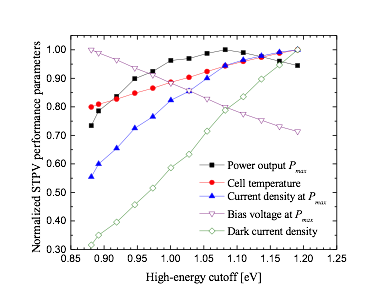 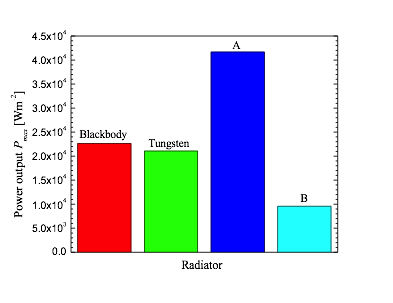 This work shows the importance of taking radiative, electrical and thermal losses into account when designing optimal STPV power generators. The next step is to examine how other system level variables such as the temperature of the fluid and the heat transfer coefficient in the thermal management system affect the radiator emission spectrum when maximizing power output and conversion efficiency.