Title: Supported PdAu Catalysts for the Selective Reduction of Unsaturated Carbon-Carbon Bonds in the Presence of Aromatic Rings

A promising strategy for the production of biorenewable chemicals from biomass uses heterogeneous catalysts to upgrade biologically-derived platform intermediates.1  One such platform is the class of 2-pyrones produced by polyketide biosynthesis.2  In the present work, we show that the 2-pyrone 4-hydroxycoumarin (4HC) can be used as a starting material for the synthesis of a variety of high-value chemicals, including pharmaceutical building blocks, fragrances, and chemical intermediates.  These target molecules must retain the aromatic ring present in 4HC (see Figure 1).  Accordingly, this presentation will focus on the design of catalysts for the selective reduction of unsaturated carbon-carbon bonds in the presence of aromatic groups. 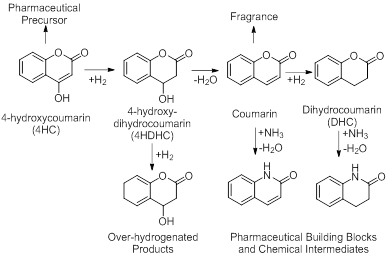 Supported palladium catalysts are effective for the hydrogenation of 4HC.  Selectivities of 88% to 4HDHC and 6% to DHC at 74% 4HC conversion were obtained using a 2 wt% Pd/SiO2 catalyst.  However, in situ attenuated total reflectance-Fourier transform infrared (ATR-FTIR) spectroscopy performed in a specially configured batch reactor reveals that, at high conversions, monometallic Pd catalysts partially reduce the aromatic ring in 4HC.  The rate of over-hydrogenation is dependent on the size of the Pd nanoparticles.  Notably, 10-15 nm Pd particles are more active for over-hydrogenation than are 2 nm Pd particles.  In contrast, the application of a bimetallic PdAu/SiO2 catalyst leads to 97% selectivity to 4HDHC and 3% selectivity to DHC at 63% 4HC conversion.  Over-hydrogenated products were not detected when using this catalyst.  Furthermore, the selective production of DHC can be achieved using a bifunctional PdAu/SiO2-Al2O3 catalyst containing both metal and Brĝnsted acid sites.