Summary. The activation of Co-Mo hydrotreating catalysts was followed by in situ XAS under conditions close to industrial practice. We demonstrate that active phase genesis strongly depends on activation parameters and precursor composition. The structure of the active phase is correlated to activity trends to obtain structure-performance relations in the hydrodesulfurzation of gas-oil.

Two-dimensional transition metal sulfides are chemically versatile and have a wide range of applications in catalysis, opto-electronics and batteries [1]. MoS2 can provide a low cost alternative to Pt as hydrogen evolution catalyst and has been applied successfully for many years in oil-refining to catalytically remove sulfur from oil. In hydrodesulfurization (HDS) catalysts, the electronic properties of MoS2 are tuned by the addition of Co/Ni, improving the intrinsic activity by about one order of magnitude. Studies on model systems, often performed under reaction conditions deviating substantially from those in industrial practice, have led to the Co-Mo-S model with Co/Ni atoms located at the edges of MoS2 nanosheets [2]. A drawback of these model studies is that trends in model HDS reactions using thiophene or dibenzothiophene (DBT) usually do not match with those observed in industrial gas-oil HDS tests. Consequently, structure-performance relations at the lab scale are not well suited to predict performance under real HDS conditions (20-60 bar, 350-400°C, gas-oil feed).

In the present work, we follow the activation of Co-Mo HDS catalysts by in situ X-ray absorption spectroscopy (XAS) under conditions close to industrial practice (20 bar, 350°C, model diesel feed). First, strategies for measuring in situ XAS in gas-liquid-solid systems are discussed. Then, by applying this methodology, we demonstrate that the temperature of the oxide-to-sulfide phase transition in HDT catalysts strongly depends on activation parameters (pressure, sulfiding agent) and the composition of the catalyst precursor. The influence of a range of organic additives with varying chelating propensity for the precursor metals on the catalytic performance in model and gas-oil HDS reactions is determined. By correlating these activity trends to the structure of the active phase, we obtain deeper insight into structure-performance relations in real gas-oil HDS.

High metal loading catalyst precursors (~20 wt%), representative of commercial ones, were prepared via impregnation of γ-alumina with an aqueous solution of Co and Mo salts and various additives such as phosphoric acid (P), polyethylene glycol (PEG), citric acid (Cit) and nitrilotriacetic acid (NTA). The dried or calcined precursors were activated in H2/H2S (10%) or H2 and an organosulfide dissolved in n-hexadecane at 1 or 20 bar pressure. The sulfided catalysts were characterized by XAS, XPS and TEM; their performance was evaluated in thiophene, DBT and gas-oil HDS reactions. XAS experiments were performed at the Co K and Mo K edge with a homemade in situ cell at BM26A of the ESRF.

Figure 1 shows that the Co sulfide phase forms in a very short timespan (< 5 min) when Co-Mo HDS catalysts are activated under conditions similar to industry (20 bar H2, model diesel feed).  This ‘ignition' is very different from the gradual sulfide phase formation, which is usually observed under model laboratory conditions (1 bar H2/H2S); it  emphasizes that active phase genesis should be monitored under conditions as close as possible to commercial practice [3]. The rapid phase transition can be ascribed to in situ generation of H2S by the decomposition of organosulfides in the feed at elevated temperatures, where Co would already be sulfided in a conventional H2/H2S sulfidation procedure. 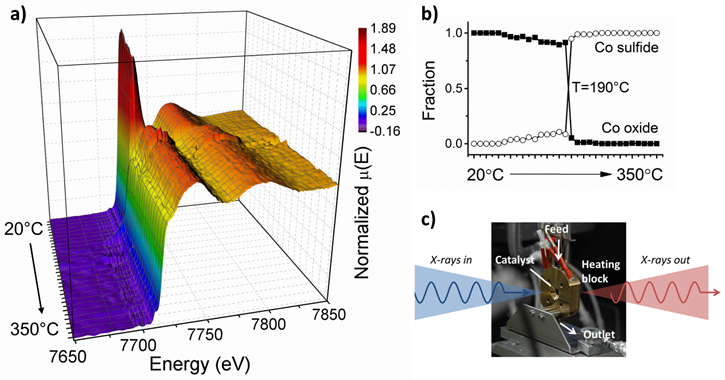 Fig.1 a) in situ Co K XANES of a Co-Mo catalyst heated in a mixture of n-hexadecane/tert-nonylpolysulfide(5%) and H2 gas (20 ml/min) at 20 bar. The time per spectrum was 5 minutes. b) composition of the catalyst as determined by LCF. c) picture of the experimental setup.

In dried and calcined catalyst precursors prepared without additives, a significant portion of the Mo remains oxidic (20-25%) and Co preferentially forms Co9S8, which is undesired because of its low HDS activity. Catalytic performance was strongly improved by incorporating additives in the impregnation step, which facilitated the formation of MoS2. The use of weakly chelating additives led to the highest HDS activity in model compound reactions (DBT, thiophene), which can be ascribed to optimal Co-Mo interaction. These catalysts were found to form sulfides at temperatures as low as 50°C; this finding contradicts the general notion that delayed sulfidation of the promoter leads to catalysts with optimal Co-Mo interaction [3]. We propose that the reducibility of Mo in the precursor is the key parameter that determines the efficient incorporation of the promoter ions into the active ‘Co-Mo-S' phase.

We have for the first time characterized the structure of the active phase for a suite of Co-Mo catalysts under real HDS conditions via in situ XAS. Activation in a model diesel feed led to rapid active phase genesis , initiated by thermal decomposition of organosulfides in the feed. An optimum interaction of the promoter and the active phase was achieved for catalyst precursors prepared with weakly chelating ligands. It is proposed that the reducibility of Mo in the precursor is the key parameter that determines the efficient formation of the active ‘Co-Mo-S' phase.