The electrical submersible pump (ESP) is currently the fastest growing artificial-lift pumping technology.  Deployed across 15 to 20 percent of oil-wells worldwide, ESPs are an efficient and reliable option at high production volumes and greater depths. However, ESP performance is often observed to decline gradually and reach the point of service interruption due to factors like high gas volumes, high temperature, and corrosion.  The financial impact of ESP failure is substantial, from both lost production and replacement costs.  Therefore, ESP performance in extensively monitored, and numerous workflows exist to suggest actions in case of breakdowns.  However, such workflows are reactive in nature, i.e. action is taken after tripping or failure.   Furthermore, the emerging trend in the E&P industry of using downhole sensors for real-time surveillance of parameters impacting ESP performance there is an opportunity for predicting and preventing ESP shutdowns using data analytics. Therefore, a data-driven analytical framework is proposed to advance towards a proactive approach to ESP health monitoring based on predictive analysis to detect impending problems, diagnose their cause, and prescribe preventive action.

Data-driven techniques employing multi-variate statistics are applied to detect and diagnose impending problems with ESP operation.  To reach that goal, a three-stage workflow was designed and mathematical models were built for each stage.

The first stage of the workflow involves prediction of failures in advance. Historical data is first used to determine and evaluate key operational variables (decision variables) affecting ESP performance. A hybrid approach (combination of first principles and close to 20 decision variables) is then used to develop a robust principal component analysis (Robust PCA) model. The model is then used to monitor subsequent operation.  An alarm is issued if a corresponding index exceeds the normal operating range established by the model, and diagnosis is offered based on the nature and value of the index or indices exceeding their normal operating range.

The second stage involved diagnostics of the potential cause leading to the failure. A mathematical model was built to determine the contribution of the various decision variables towards failures and ranking them according to these contributions. This ranking will help the operator understand the root cause and take appropriate action.

The third stage involved prescription of preventive action. It was modeled keeping in mind the operators need for a remedial solution to fix the issue. Stable operating ranges were determined for each decision variable. Operating within the stable range would not lead to an alarming event. The values of the parameters during the failures were compared against the stable operating ranges to understand which all parameters were behaving outside the acceptable limits. Those parameters were reset to values within the acceptable range.

In building the predictive model based on normal operation data from an oilfield, it was demonstrated that four principal components obtained from the model output were sufficient to capture more than 80% of observed variance with 95% confidence limit.

Trends or patterns during normal operation were identified and correlated to either satisfactory operation or impending problems. This could be observed in the plot of Scores of Principal component 1 and Principal Component 2 as seen in figure 1. In this plot, the stable operating zone is clustered together as a green zone along the (0,0). The failure data sets move away from the stable zone with increasing time steps and fail at a point farther away as shown below. The increasing numbers represent the increasing time steps. The Trip 1 happened at 1518 minute, therefore the ESP was functioning abnormally for more than 24 hrs before it actually failed at the 1518th minute. With this kind of pattern plot, the failure could have been detected much in advance and could have been prevented. 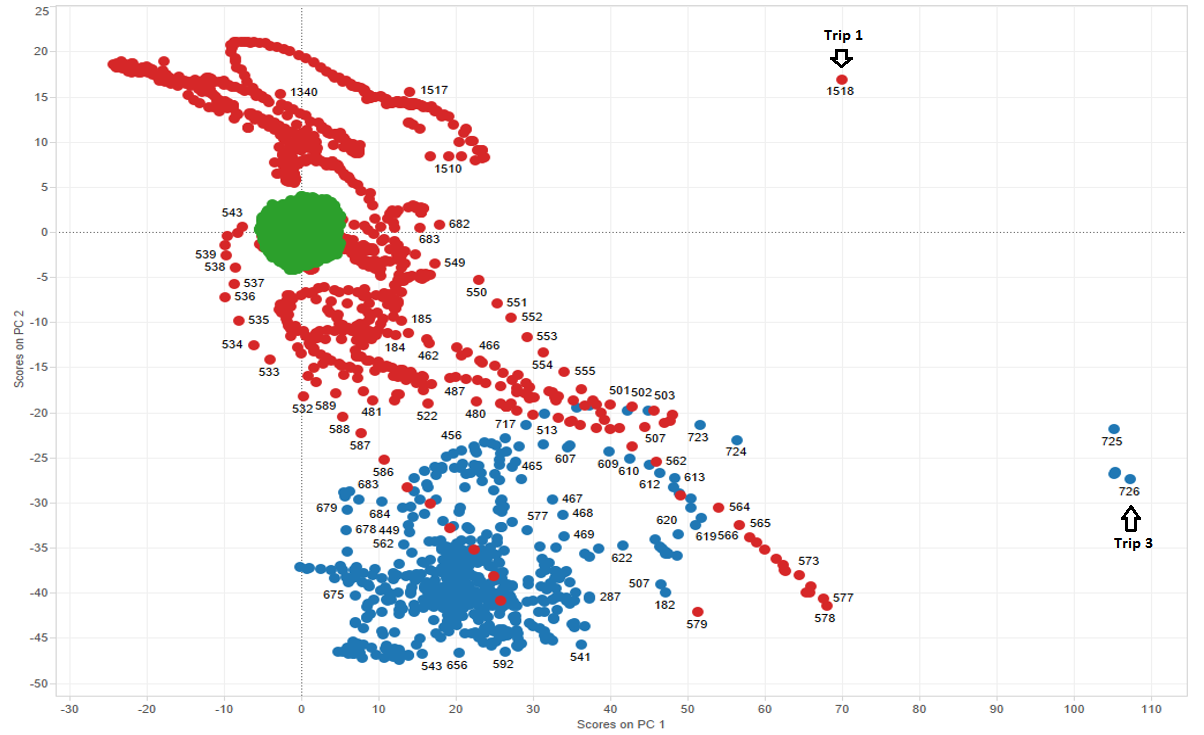 It was observed that the Hotelling T-square distribution statistic monitored over time stays within the 95% confidence limit for stable operation and exceeds the limit during unstable (transient) operation, long before an ESP trips or fails.  The actual value of this statistic during a trip or failure shows an increase of more than two orders of magnitude compared to its normal value.  The statistic successfully identified all impending trips or failures a few hours before they actually occurred.  Had this tool been used in the field, there would have been ample time for preventive action that could mitigate or altogether avoid each problem. 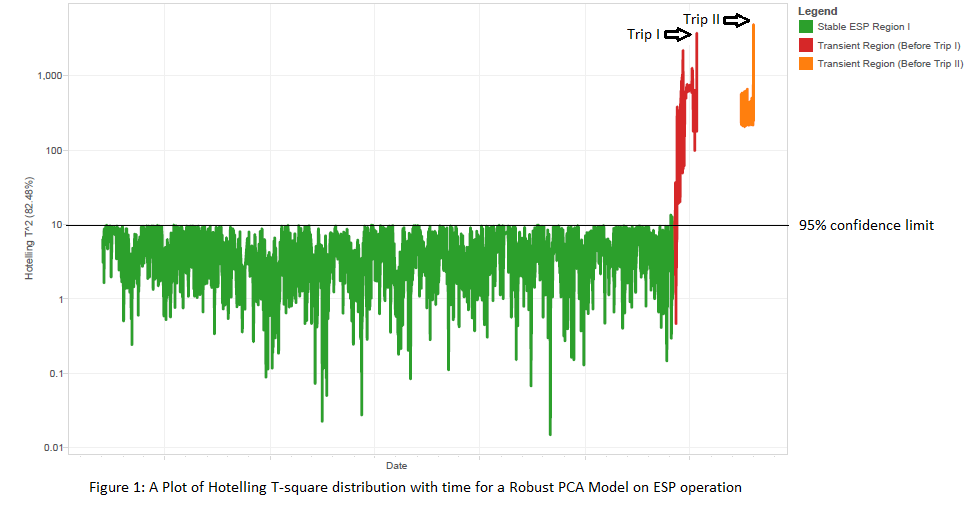 Figure 2: A plot of Hotelling T-square distribution for a Robust PCA Model 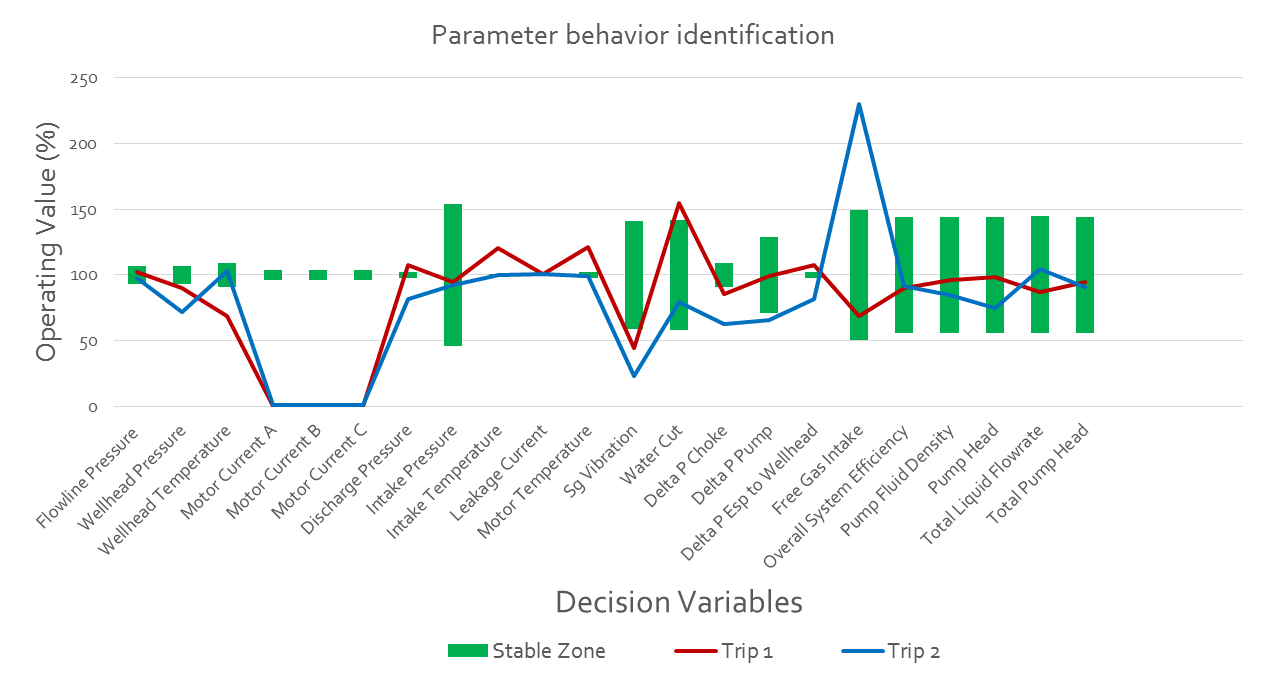 4.  Significance of the Subject Matter